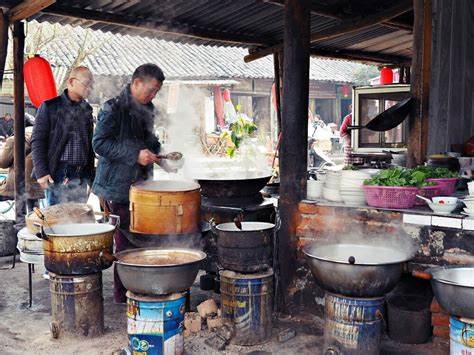 The city of joy is one of the few places in the world that can embrace not having just one but two Chinatowns. Tiretta Bazaar, commonly known as "Old China Market", situated in Central Kolkata, near the Lalbazaar area is now home to over 2000 Chinese Indians. Earlier the population used to be more than 20,000, but now a majority of the population has relocated to Tangra, near EM Bypass, making it the second Chinatown of Kolkata.

During the Opium Wars in the late 18th century, Chinese people migrated to Calcutta and settled here. Since then they have preserved a lot of their culture and heritage in the locality, although many of the architectural structures have been removed to make way for modern infrastructures.

The bazaar was first mentioned on Upjohn's map of Calcutta in 1790. Other historical documents indicate that it was named after Edward Tiretta, an Italian residing in Calcutta owned the bazaar as well as several plots of land in the city. If you're looking to taste authentic Chinese dishes in India, then Tiretta Bazaar, also locally known as “Chennapara”, is the right place for you. Apart from various authentic Chinese restaurants, this place is well known for Chinese breakfast delicacies, like steamed or fried wontons, momos, and dumplings, for as low as Rs 50 per serving. Therefore visiting Tiretta Bazaar on a cold winter morning for breakfast is a must.

Tiretta Bazaar is just a 10-minute walk from Victoria Memorial. If you're visiting Kolkata, I would recommend wake up early and visit Victoria for a gorgeous sunrise. Then head towards Tiretta Bazaar by 7 AM for lip-smacking breakfast dishes. It is open on all days, so you need not worry.

Tung NamYou'll find your ultimate food paradise near Poddar Court, just a 10-minute walk from Central Metro station. This is one of the most affordable and delicious Chinese restaurants in Kolkata. Steamed Chicken wonton and Pork Ham Choy rice are must-tries while you're here. Tung Nam has their own black bean sauce which goes well with the wonton. Ham Choy rice is itself a dish made with meat and spinach, so you need not add any accompaniments.

Sei Vui, also located at Poddar Court offers a very cozy ambiance. It is one of the newer offerings of Chinatown. The building was actually a very old Chinese infrastructure is renovated into an old-school Chinese restaurant. Some of the dishes that I would recommend are the Prawn Tausi (cooked in fermented beans and black bean sauce), Ham Choy, and Squid with Oyster Sauce.

Food is a big part of any culture. But Tiretta Bazaar also offers a lot more than just mouth-watering dishes. When you are in Tiretta Bazaar, visit some of the Chinese Temples that date back to the early 20th century. Nam Soon is the oldest temple in Chinatown established in the 1820s.

Once you have explored the ancient Chinatown, you can move towards Tangra, which is just 2.3km away from Tiretta Bazaar.  It offers even more authentic restaurants like Kim Ling, Shun Li, Kafulok, and many more. If you are a foodie and an authentic Chinese food lover, Kolkata’s Chinatowns always have a lot in store for you!