Tracing the Origin of Gender-Neutral Pronouns 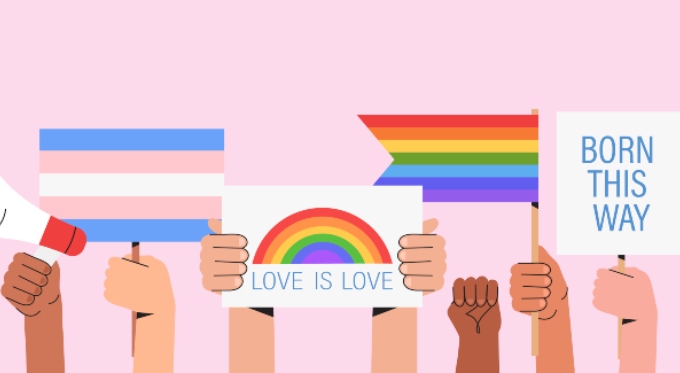 They, Mx., and hir are often thought to be recent inventions. However, English speakers have been trying to find new ways to discuss gender for a long time.

Ella Flagg Young, the first woman to serve as superintendent of the Chicago public school system, mounted the stage in front of a gathering of school principals on a freezing January day and said that she had found a new answer to an old problem. “I just filled a long-standing need,” she said. “The English language needs a third-person singular personal pronoun that denotes both sexes and therefore avoids our current grammatical awkwardness.”

Instead of he or she, his or her, Young advocated that schools use a hybrid of the two: he'er, his'er, and him'er. According to newspaper reports from the time, Young's notion provoked gasps from the principals. When Young used his'er in a phrase, one of the students exclaimed, "Wh-what was that? We're not sure we comprehend what you said.”

Young was taking the pronouns from Fred S. Pond, an insurance businessman who had coined them the year before. However, her suggestion quickly became a national news event, garnering puzzled write-ups in the Chicago Tribune and the Associated Press. Some welcomed the new pronouns, while others saw them as a needless linguistic complication, and yet others feared that the adoption of gender-neutral pronouns would spell the end of language as they knew it. For example, a Harper's Weekly editor claimed that "when'man' stops to include women, we shall cease to require a language."

Today's gender-neutral English-language pronouns accommodate not only two genders, but many more, providing a method for persons who do not fit within the dichotomy of "man" and "woman" to express themselves. They've been a common sight on dating apps, college campuses, and email signatures in recent years.

A Trevor Project survey in 2020 discovered that one in every four LGBTQ teenagers uses pronouns other than he/him and she/her, and the American Dialect Society designated the singular 'they' its word of the decade.

Till recently, gender-neutral pronouns were reserved for describing others—mixed groups or individuals whose gender was unknown—rather than for describing oneself. Even though people did not directly identify as nonbinary in the same way that we do today (though some did identify as “neuter”), neutral pronouns existed, as did an understanding that the vocabulary we had to communicate gender at the time was insufficient. English speakers have wished for more nuanced ways to discuss gender for at least three centuries.

The singular 'they', which was a typical way to identify a person whose gender remained unclear for centuries, is likely the oldest gender-neutral pronoun in the English language. Individuals who did not conform to binary gender criteria were even referred to as they/them in medical books for a time in the 1600s. Only in the 18th century did the pronoun's fortunes turn around, when linguists came to believe that the singular' they' were grammatically erroneous.

They were replaced, however, by a slew of new pronouns. According to Dennis Baron, retired professor of English at the University of Illinois at Urbana-Champaign and author of the authoritative history of gender-neutral pronouns in his book, "What's Your Pronoun?" Since the 1780s, English speakers have advocated 200 to 250 pronouns. Although most of them died relatively shortly after being introduced, a handful took on lives of their own.'Thon', which is short for that one, has resurfaced regularly since an attorney called Charles Converse initially proposed it as a more elegant way of phrasing he or she. Converse claimed to have created the term in 1858, but it did not appear officially until 1884. The word made an impression on grammarians, and more than a decade later, the publisher Funk & Wagnalls included thon in their dictionaries. According to Baron, the word had a "kind of band of followers." “Through the 1950s and into the 1970s, there were renowned Americans who would occasionally market thon.”

Although we normally separate gender and sexuality today, at the beginning of the late 1800s, sexologists promoted the notion that persons who were sexually attracted to the same gender intrinsically belonged to a "third sex" or were, as one popular term put it, "gender inverts." In other words, most people felt that queer sexual orientation was linked to gender identity, therefore any definition of a gender binary looked different back then than it does now. “We can never go back in time,” says Sage Milo, a scholar who studied Urania while writing their Ph.D. dissertation, “so there will always be that contemporary lens looking back with our systems and terminology.”

The majority of what has changed is that gender-neutral pronouns are now more common than ever before. The pushback against them, on the other hand, is nothing new.