Walking from the ambiguous tale of mythology to reality! 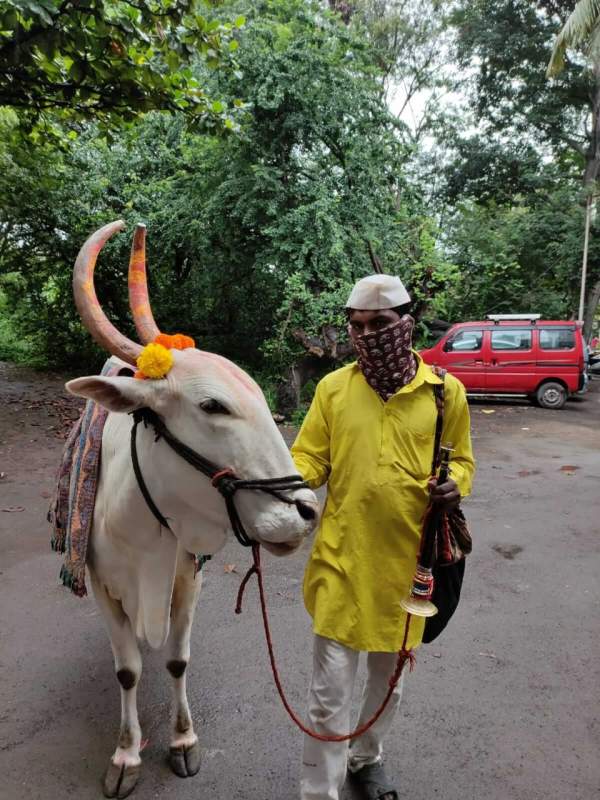 During Janmashthami many dwellers brought cows with them and seek clothes, money and food in the name of holy cows. They pleaded for a fair amount of money to feed the poor's or the animals in exchange for blessings from the cow.Do you think this kind of activity is right to be continued in India? Let's see

What Do The Mythological Tales Indicate-  Sacred Cow!

The month of Shravana in the Hindi calendar marks the birth of the famous Hindu God -Lord Krishna a.k.a Gopal! The tales of Bal Gopal remind us of the sight of Lord Krishna surrounded by cows and thus known as Gopal . Some more friendly indications, when ( Demon) Putana kidnapped little Krishna- mother Yashoda took Krishna to the cow and prayed for his well-being. ( Here we can trace to Krishna's Bhagavad Gita where he deciphers - cow is the mother of every creature, along with biological mother. )  Another instance, Krishna lifts the Govardhan Parvat and amazes Lord Indra's ego - he asks the king of heaven ( Lord Indra ) to apologize, accordingly lord Indra gifts Krishna a cow to persuade him hence called Govinda . Mata Yashoda even applies Gomutra ( Urine of Cow ) on Lord Krishna to protect him from the demons of Braj. Likewise, the last Avatar of Krishna explains to his kin Uddhava that worship of cow/cow's pooja is equal to Worshipping him ( Lord Krishna). This mythological statement had made many followers of Lord Krishna, worship holy cows.

Pieces Of Evidence Of The Prominence Of Cow In Hindu Mythology -

meaning - Kamadhenu ( the ancestor of all cows) is the key to all desires/wishes. ( The Vedas -one of the oldest Hindu Scriptures, claims that the cow is related with Aditi (mother of all gods) and all the gods and goddesses abode in the cow.Hence, Surbhi ( ie;Kamadhenu ) is the superior goddess - worship her.

Gopastami - celebrated by the Hindus once in a year where cows are worshipped . Cows are considered as mothers of the 33 crores of demi-gods that led to  creation of material presences throughout the whole universe. No Yagya / Yagna is possible without definitive ingredients like ghee and milk we retain from cows.

Actual Instances Of Prominence Of The Cow In India

The glorified image of the cow played a huge role in rebellion for the First war of independence in India(1857) against the British East India Company. When the Indian soldiers came to believe that their paper cartridges ( which carried gunpowder ) were greased with cow ( and pig ) fat, they began revolting. Arya Samaj's founder - Swami Dayananda was one of the primary leader of the movement who supported protection of cows from slaughtering . At present, we have groups like the Gau Raksha Dal - spreading awareness regarding the protection of the cows .Gandhi Ji believed that the protection of cows was an emblem of Animal Rights and expansion of Ahimsa against all life forms. Even the constitution of India directs - protection of cows .

The Hindu Philosophy advises- "None should one feel any revulsion towards urine/dung of a cow because it's also considered as pure!".The best instance for this - Indians were evidenced bathing with faeces of cow and even commendable Guru Ramdev recommended Gomutra ( Urine of cow ) cures the deadly Covid-19.

Religion - A Promise Or Deciet ?

After all, looking at the occurrences of dwellers with animals/materials with unavoidable demands and religious calls can make anyone sentimental. Religion is surely an enormous promise until you follow it with positivity, peacefully without any ransack intentions. Yes, we all are mean, we pray for our desires or self needs but using the option of religion or sacred symbols in facets like ransacking, greed, loot or materialism is not right. There are numerous people (in India ) who are walking in the midway of roads, localities and public places seeking and deceiving others for money, clothes or food in exchange for God's blessing or any particular religion, which is straightforwardly wrong from all notions like from humanity, mythologically or socially.

God is everywhere, we don't need any special occasion for his existence but yes, celebrating the ceremonies have always been a part of cultures but unfairly ransacking or seeking materialistic goals is an inappropriate practice.

Many preach Swami Ramakrishnan and on other hand, we also acclaim Tulsidas Or Sai baba . They were humans too. In Hinduism, no God ever asked for a committed donation of goods or money. You can just pray to God with a will of peaceful mind and heart if you cannot contribute things - remember Sudama's bhakti for Lord Krishna even after he was miserable. Also, Lord Rama tasted the same berries Shabari offered him after tasting them herself.

However, it is understandable that the dwellers deceiving people in the name of religion / God , they can be povertized, born as or forced to continue such jobs. But, continuing such work without even trying for a better life is not a solution. India is a country of diverse cultures and religions but this belief of Materialism for Religion / God is wrong.

What Can You Do If Someone Is Decieting You In the Name Of Religion / Sacred Symbols ?

Instead of letting dwellers expanding such notions - taking religions as an immoral profession in the name of God/religion you can initially, ( the least you can do is ) aware them more about the false impressions, offer/allot them jobs in shops or stalls near you, ask other people of the locality to help them get an employment or work.You can try to reach the Ministry of Labour and unemployment, Jobseekers / Employment: National portal of India, policies like MNREGA or go to sites like JustDial (phone- 088888 88888) to ask for nearby hirers. Be a link for them to prosper.If they wish to continue spirituality, suggest them ashrams like,

If you notice such situations, just try to discuss with the majority about the right knowledge of Mythology and bring everyone to discuss for the right step. You majorly won't feel like giving your time or interest to such happenings but believe me, this is where a change starts from. This is how Raja Rammohan Roy kept stepping up for the rights and succeeded at renaissance, this is how India was able to wither the superstitions and many old beliefs from pure Indian culture.

( This article is based on true facts and means no offense or bias to any religion/ culture .)

The Beauty of Belief……..