What is Cancel Culture, and Why does it suck? 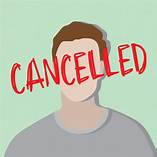 “The guilty is oftentimes the victim of the injured.” – Kahlil Gibran

The Gen X era is home to millennials who put up with a lot for the privilege of being a part of something. The delight of being recognized, known, and loved is much less than the fear of being an ‘Outcast’. This fear puts forward an almost desperate desire in us humans to conform.

Cancel culture is being culturally blocked, or essentially getting expelled from society. This phenomenon happens when a person is deemed to have committed a social crime, resulting in public humiliation, social boycott, and an altogether cultural backlash. Cancel Culture is a social issue suffering from a lack of reason, compassion, and common sense. The fear of being canceled drives the decisions of a majority of people. No one likes being an outcast, not realizing that we don’t need everyone to love us, just a few good people (courtesy- The Greatest Showman).

"No One Ever Made a Difference by Being Like Everyone Else." – P.T Barnum

“Cancel-hood” is no longer a punishment for celebrities, politicians, or public figures for that matter. It has extended its horizon to include every form and shape of society, whether famous or unknown. Therefore, the problem isn’t really the presence of cancel-culture, but the secondary effects arising out of it, if left unchecked. The most prominent of them being the death of creative passion in work and its execution with a fear of being doxed, the fear of being bad-mouthed by people, the fear of reaching the end of one’s career; or in simpler words, the fear of being canceled.

It just goes on to show one of the many ways our peers can influence the decision we make. We edit and harmonize our tasks according to the likes and choices of the people around us just for the sake of ‘approval’. Human beings crave to be approved so much that we mimic the person we want to be and forget ourselves on the way. On a daily basis, we witness people who feel pressured not to speak their minds on certain issues because they have heard the woeful tales of people who did. J.K. Rowling, Kevin Hart are some of the infamous bystanders of this culture.

While the cancel culture could sometimes play good cop, but the creative passion should remain intact without any fear of the unknown. Imagine that some of the world’s greatest movies and shows (especially comedy) would never have been made if these moral police forces started sucking the fun out of every teeny-tiny error in jokes. The irony is that creative works are no longer allowed to be risky. This attitude leaves the end-product dry and conveniently moral.

As Solomon Ash put it, “the fact that intelligent, well-meaning, young people are willing to call white black is a matter of concern.”

The difference in effect:

Studies have shown that 1 in every 4 cases of cancellation has huge economic impacts on either the person or the organization. For instance, let us assume for a second that we collectively opt for the cancellation of Meta (previously known as Facebook). Now. It wouldn’t be the first case of cancellation that the company will witness. But, would it really affect the CEO or top officials of the company? Maybe a little. But the major impact of this cancellation will be on the company’s employees who survive on bonuses and live paycheck to paycheck. Hence, the practical target of our outrage will be missed.

The Burden of Proof:

When people find it difficult to prove their innocence amidst such public outrage, they often accept their fate and change their way which was earlier so offending to the people. This is why cancel culture is referred to as the “guilty-until-proven-innocent” process. “We tend to accept the love we think we deserve.” (The perks of being a wallflower)

The most vulnerable victim of this cancel culture is the average person. An average Joe doesn’t have the backing of an overwhelming support of evidence to prove his/her case. And when the deed is done, they fail to gather as much social credit and financial capital as any celebrity to revive into societal integration. No employer is ready to take the liability of a canceled person.

The cancel culture is toxic as the justice system it follows is flawed. There is no limit to it and the scale and proportion of punishment for every alleged crime are more or less the same. There’s no defense, grace, or mercy. The music of the mob becomes deafening as the society is primed to react a certain way in which the others are reacting. Just think a little, how many times have you changed your opinion/comment after seeing other comments on an issue or a post? In the world of social media, our outrage is more directed towards other people’s outrage than towards a situation. What does it say about our collective vanity if we are offended at everything?

Although, cancel culture has helped us to reflect and be more mindful of other people’s beliefs. But this culture needs to be seriously examined as it inadvertently kills free speech. The real victims of cancel culture may not be the one who experienced it, but the one who hasn’t been canceled yet and live under constant fear of being canceled. This fear leads us to check every word of our speech and every phase of our actions. It restrains us from engaging in a debate or discussion which might offend others, even when we feel deeply about it. Conclusively, the unshared thought is the true victim of cancel culture.

Where Do Students Get Their News?