What makes the Farmers’ Protest Unique? 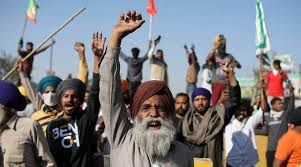 The Indian political landscape has recently seen numerous protests. These protests were accompanied by their own share of supportive, affirmative, and an opposing audience. What makes the farmer’s protest unique, is the massive support they have garnered within, what was until now a very silent opposition. To drive the point further, AAP leader Arvind Kejriwal, even with his boisterous personality had maintained an eerie quiet during the intersperse between the student protests and the Anti-CAA protests in the National Capital. This is not to say that the farmers’ movement is a battleground of differing political motivations or that students' movements were standalone affairs. There was support from academicians, influencers, media houses, and some new generation political leaders, yet the absence of traditional opposition was a very important observation.

What is it about the farmers’ protest that the opposition finally came out of its rabbit hole? It was the novelty in the actors of the protest, that is, the farmers. Farmers have been traditionally a sympathy generating section of the Indian population. Since the time of Lal Bahadur Shastri, the rhetoric of national pride and immense political respect has been given to the farmers. Political slogans like ‘ Jai Jawan, Jai Kissan’ have been drilled into the political consciousness of this country. Farmers had to protest on the streets for their livelihood is not just a damaging picture for the government but portrays a turn of events, wherein, the nation's pride is on the roads fighting for survival. While there stands an obvious conclusion to this, that the absence of the traditional opposition from the farmers’ protest would have been noticed and flagged by the politically active members of this country.

Another key lesson for us is that politics in India is still being driven by the leading political party. Students and political minorities do not garner the same sympathy as that of farmers. The alienation of a particular vote bank ensures that the opposition continues to be silent even when the political rights of citizens are being blatantly flouted. Traditional opposition continues to play it safe. In fear of the vote bank which they have already lost to the leading party, they alienate the section of the population which feels frustrated in the country today, sensing the presence of no political representation that they can associate with. This has resulted in stagnation in Indian Politics, where all traditional actors of Indian democracy seem to have failed the Indian populace.

There is no political motivation in the country's opposition to ask the hard questions anymore. The political conversation has come to a standstill where certain questions have become too polarised to be asked anymore. Opposition continues to battle the leading ideological forces on their grounds, they refuse to engage substantially with the core ideals that these ideological forces stand on. There are no differing opinions anymore it is a variance of the same position being packaged along with different political banners. The farmers’ have been able to challenge the government outside its ideological stronghold. This is neither a population that can merely be branded anti-national, anti-Indian nor is this section of the population pitting national interest against self-interest. The novelty of this protest is that there is no single or unified political organisation that has culminated into the farmers surrounding the national capital. The absence of the traditional political leadership is the currency that the political movement has. The farmers can save Indian Democracy because this is not a battle of political packaging but survival which resonates with the populace of this country.