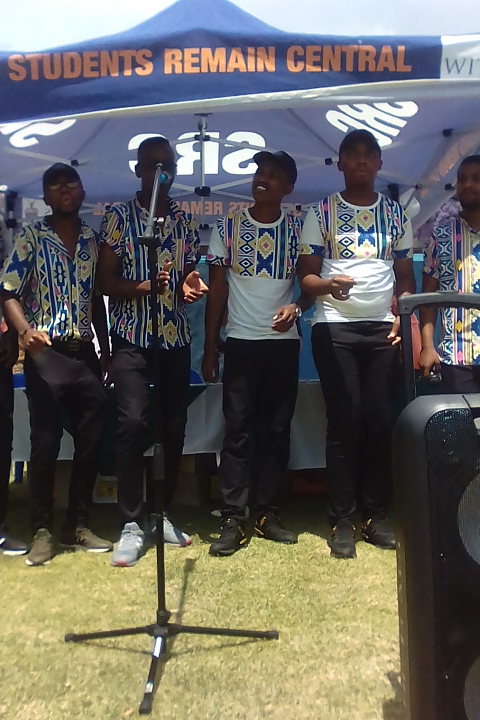 Let us first revisit the definition of Drama and Theatre before attempting to understand these in the frame of Applied. I will not enter deeply into the characteristics of Applied Drama and Theatre, but only outline what they entail. In classical culture studies it is said that ‘drama’ comes from the Latin word ‘dran’ that means “to do or to make”, and theatre comes from the Latin word ‘theatron’, which means “a viewing place.”

Philip Taylor best explains to us that drama and theatre when they are applied, on one hand, are a process-based practice whereby drama elements, such as narrative, metaphor, conflict, and characters, are applied in social work. And on the other hand, are a performance-based practice whereby theatre space is created to enable acting out of societal concerns (Nicholson, H. 2005: 4).

Applied Drama and Theatre is thus a creative form that accommodates various labor divisions by infiltrating communities that are not necessarily acquainted with the creative industry. These communities can be schools, clinics, and prisons, where the art forms, Drama and Theatre are applied to achieve social transformation.

According to the political leader of Ghana, Kwame Nkrumah, neo-colonialism is a discourse that emerges from colonial advance. It is the last phase of imperialism played out in the socio-economic and socio-politico arena (Nkrumah, K. 1965: ix). South Africa is one example of the neo-colonial States stipulated in Nkrumah’s book in that the South African government has become an elite of blacks who acquire their riches from their external imperial masters and rule a country without the interest of its citizens.

The eradication of traditional leaders, traditional policy, and traditional commerce through colonialism led South Africa to lose its traditional values. The historical ailments of the South African population associate its black race with poverty to the point where making ends meet becomes a priority and a definition of active citizenship.

Neo-colonialism renders the masses of South Africa frustrated by their lack of agency, as they had to adopt a culture of dependency on the elitist government for the gratification of basic needs and public services.

Applied Drama and Theatre as a discipline focus on social transformation and falls under the category of public service that is deemed as something that the masses need for their issues.

Process of Transformation and Description

The individual/collective is exposed to alternative facts or ideas about their present behavior.

The individual/collective undergoes a particular disillusionment about their unhealthy behavior.

The individual/collective consciously considers the necessity of changing their unhealthy behavior at a personal level.

The individual/collective consciously considers the impact that their behavior has on their surroundings.

The individual/collective commits to change.

The individual/collective finds social support for their decided behavioral change.

The individual/collective move to a social stratum that will empower them in their change.

The individual/collective increases the rewards of the change and decreases the negative aspects of the former behavior.

The individual/collective removes reminders that propel them to engage in their former negative behavior, making space for the healthy behavior that they aspire towards.

The individual/collective acknowledges how their change is aligned with their environment’s prospects.

The Transtheoretical Model is activated in Applied Drama and Theatre, as the feasibility of the ten above-mentioned processes is rehearsed in a dramatic session. For example, in Augusto Boal’s Theatre of the Oppressed, a participant can challenge society on a physical level. And in Cecily O’Neill’s Process Drama a participant can communicate opinions, feelings, and criticisms they harbor about social norms through the ‘dramatic elsewhere’.

In consideration of the South African government, it is reasonable to suggest that an Applied Drama and Theatre session can assist in a social transformation that would shift the neo-colonial status quo, as Applied Drama and Theatre has the power to make thought visible through the roles that participants play. The discipline of Applied, therefore, can aid the South African government to develop empathy for its subjects, breeding a healthier relationship within the community, granted that the discipline of Applied is based on the indigenous wisdom of the South African community.

Proper innovation for South Africans at this point needs to happen through traditional values that are not disrupted by foreign standards. This is a challenge for every Applied practitioner to watch if the discipline of Applied does not demean these traditional values. Nevertheless, I think my advocating for intervention in the official strata of the South African government would be a start towards positive growth.