Why should you read Plato and Aristotle? 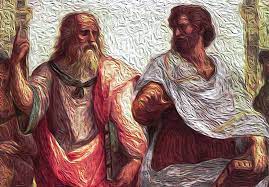 The importance of Classic Greek idea

The Western idea of Political Philosophy emerged from three seminal thinkers, namely, Socrates, Plato, and Aristotle. Their work's utility holds value despite being centuries old and is taught across the globe today. The books included often in the discussions are Plato's Republic and Laws and Aristotle's Nicomachean Ethics and Politics. All these deal with diverse questions and solutions. Yet are still clubbed under the same category despite the different subject matters. The basis of this lies in the problems which they recognized as perennial to human society. Their work centers around three questions -

Political philosophy continues to strive to answer these questions in light of the new information found today. It is only natural for students to acquaint themselves with the history before focussing on the present. Isaac Newton once said that he had seen the universe because he stood on the 'Shoulders of Giants'.

New generations do not need to invent the wheel for making the machine. Similarly, in politics, formulating new concepts and terminology becomes unnecessary when the classics are already present.

Of justice and the human psyche

The foundation of political philosophy was laid by Socrates. His student was Plato. Aristotle was a disciple of Plato.

Socrates said that there are two subjects of any particular inquiry - knowledge, and opinion. Knowledge is objective, uniform, and universal- based on sound principles that can be proven. But, opinions are subjective; they revolve around impressions and perceptions.

In The Republic, Plato argued that justice is a prerequisite for a healthy society. Plato wrote the book as a series of dialogues between Socrates and their contemporaries. He concluded that justice is a relationship among individuals about the social organization in which they live. This definition, though slightly vague, can be applied to justice today when complicated laws encircle it. The holy trinity of western philosophy believed that the personality of a person is a combination of– Desire (appetite), Emotion (spirit) , and Knowledge (intellect).

A society consists of businessmen, soldiers, and perhaps most importantly, philosophers. The mutual harmony between these sections makes a just society. This observation made thousands of years back still holds ground.

A look at early Communism

When we think of the Communist ideology, our mind conjures up the images of Karl Marx or Lenin, fighting for the rights of factory workers. But it has its humble origin in Greece. Plato said that property, family instincts, and private interests would distract the man from his obligations to the community. He wanted a standard, unified education system- where physical activities would have greater focus in the initial years of childhood. Students would be later classified after meticulous tests to gauge their caliber and area of interest. The philosophers and soldiers would comprise the guardian class. To prevent their corruption, Plato came up with 'Communism of property and wives.' It was another measure to ensure that the Ideal State came into being. The guardian class would enter into group marriages, their children isolated at birth and put under state care. The rudimentary idea was removing temptation. The ancient Greeks recognized that when one individual or group had money and resources, corruption was imminent. Plato's Communism is quite different from modern communism as the latter applies to the whole society. Plato said that elaborate education would lead to Communism while Marx believed that revolution is the way. The 'Communism of property and wives' is about sharing property and aims to satisfy minimum needs while giving importance to moral values. Contrary to that, modern Communist ideology talks about common ownership for fulfilling material needs and prioritizes material satisfaction.

Aristotle recognized the pattern of political instability in the Greek city States while studying constitutions. His classification was based on two factors:

1. Whether a state is ruled by one of the few or many.

2. Whether the ruler is devoted to his self-interest or the interest of the state.

If it is few people in power, then the normal would be an aristocracy. The perverted form would be an oligarchy.

A constitutional government would be the best version of many ruling together. But the perversion would be a democracy.

Normal is devoted to the state's well being and perverted represents selfishness. Plato claimed that the transition would be cyclic. At first, there would be a singular monarch. Their corruption would lead to the rise of the aristocracy. In due course, more people would revolt to establish a polity that degenerates to a democracy, eventually overthrown by a single virtuous man, so the cycle continues.

Democracy is seen as the supreme form of Government today owing to the increasing importance and awareness of equality of participation. But democracy is no magic pill, classical western philosophers explicitly pointed out its faults. Plato said that democracy leads to anarchy and dictatorship.

"Democracy..... is a charming form of government, full of variety and disorder and dispensing a sort of equality to equals and unequal alike." - Plato.

He thought that democracy is not the model form as not everyone has the knowledge required to run the state. He proposed censorship of art and literature to suppress protests against the state. Aristotle brought a solution to the table after studying all kinds of constitutions. He concluded that monarchy involved the exercise of absolute power and was thus prone to corruption. Aristocracy could prove effective if the distribution of power by democracy is ineffective as it is the rule of the mediocre seeking to serve their interests. He suggested a mixed constitution that would grant the authority to rule to the educated and competent people. As a way of modern-day checks and balances, the ruling class would not be allowed to exercise absolute powers. Their decisions would be subject to the approval of ordinary citizens. This 'Golden mean' between Aristocracy and Democracy is a lesson for current legislators too.

There are other aspects like the status of women and slaves that ancient western philosophers discussed at length. Plato, to an extent, supported equality between men and women as he suggested the same powers of husband and wife in his system of Ideal state. Aristotle, on the other hand, regarded men as superior to women. He said that women were weak of will therefore incapable of independence. Aristotle was a pragmatist who agreed with customs that appealed to the masses. In a day where feminism is in vogue, it is absurd to agree with such notions when it has been proved time and again that women are as capable as men. Both these thinkers also agreed to the slavery system. They were Chauvinists who being chauvinists who believed in the racial superiority of Greeks. Aristotle went one step ahead and suggested harsher punishments for slaves as he believed, they felt less pain. This racial prejudice is unacceptable today. But one must remember the very same ideas that led to colonization. Understanding dogma is the key to countering it. While slavery may not legally exist, inequality is widely prevalent even today. Critical analysis of the works of Socrates, Plato, and Aristotle will help us analyze the present situation.

The classics provide adequate help and insight for solving contemporary problems and constructing our political thought.