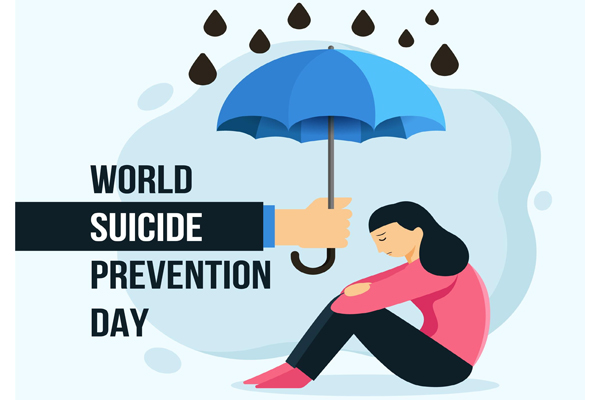 Every year about seven hundred thousand people worldwide die of an entirely preventable cause; suicide. When a person dies by suicide, it often has a ripple effect on loved ones and those around them. The signs of a mental health crisis, however often go unnoticed under the humdrum of busy, everyday life. In India, 381 people were lost to suicide every day in the year 2019. 60% of them were in the age group of 18-45. 50% of India's cases of suicide came from just 5 states -Maharashtra, Tamil Nadu, West Bengal, Madhya Pradesh, and Karnataka.

The World Health Organization lists several causes which make a person vulnerable to suicidal thoughts. These include loss of a loved one, experiencing violence or abuse, break up of a relationship, and social isolation among others.

For the past year and a half, the world has been dealing with a deadly affliction. But in India, things went from bad to worse in a matter of months. The second wave of Covid-19 has washed over India in the past couple of months. The news got grimmer by the day. There was death and misery all around. Images of patients being given oxygen at hospital gates or those of mass cremations on the pavement should haunt our collective conscience for decades to come. Social media was flooded with desperate pleas for one oxygen cylinder or a hospital bed for loved ones. India was caught off-guard while the politicians were busy with election rallies. Arguably, policy failure and lousy governance were the main culprits of the second wave.

However, while we prepare for the third wave, there’s another pandemic, brewing silently underneath the current one. It’s creeping slowly into our lives, leaving only wreckage in its wake. The WHO estimates that 7.5% of Indians suffer from mental health problems. If past predictions were correct this number had already increased by 20% at the end of 2020. The pandemic has exacerbated existing problems and triggered new ones. Isolation, death, grief, and uncertainty about the future have left people feeling lonely and hopeless. Moreover, the pandemic has directly impacted hundreds of thousands of Indians who are battling illness, death, and financial hardship. All these people urgently need access to mental health resources.  Sadly, it’s just not accessible to the masses. There aren’t enough mental health practitioners; good quality therapy is costly. Often, the stigma associated with seeking help forces people to suffer secretly. The link between mental health disorders and suicide is quite clear. A Lancet report from 2012, published in The Hindu, pointed out that Indians aged 15-29 are most vulnerable to death by suicide. People belonging to this age group are often students or young professionals. A vast majority of them cannot afford to pay for therapy. Parents who belong to a different generation and are already paying large sums of money for their children’s education are often hesitant to pay for therapy. The pandemic has only compounded mental health problems. The demand for mental health has soared. More and more people report feeling isolated, depressed, and anxious; millions more suffer in silence. The need of the hour is to ensure that effective and affordable therapy penetrates different strata and sections of society.

What Can We Do to Prevent Suicide?

The 10th of September is observed as World Suicide Prevention Day. WHO states that suicide is a serious public health problem but there is a lot that we can do as individuals and as communities to prevent suicide. If we sense that a loved one seems withdrawn or anxious, we should listen to them. The importance of lending non-judgemental support cannot be stressed enough. We should also encourage our loved ones to seek professional help if they are suffering from mental health problems. Offering to accompany them to an appointment is a good way to show support. As communities spreading awareness to end the stigma around depression, anxiety, etc. can be of immense use. The societal outlook towards suicide must change. Society tends to blame victims of suicide by labeling them as weak or selfish. However, the fact is people who take their own lives are simply suffering. We as individuals and as part of a larger community must do more to alleviate such pain. Reducing suicide rates is an indicator under the Sustainable Development Goals (SDG) of the United Nations. In India however, the suicide rate has been increasing. It has risen by 3.4% in 2019 compared to 2018.

Data from WHO shows that 77% of suicides occur in low and middle-income countries. It must be noted however that most of the world’s population lives in these nations. Globally, suicide is among the four top causes of mortality in the population aged 15-29.

Unfortunately, mental health was heavily underfunded even before the pandemic. The WHO points out that most countries don’t spend even 2% of their health resources on it. Countries need to increase their budget allocation to mental health services and tend to the growing needs of the people. India must undertake campaigns to spread awareness about the necessity to seek help. Mental health must not be dismissed either as a luxury or as taboo. The government must ensure this.

If you or someone you know is in need of help, here are some helpline numbers in India

Body Shaming And How It Affects Every Age Group