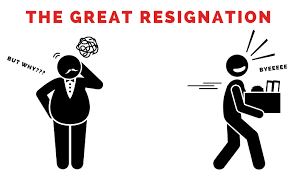 The year 2021 has witnessed many tremendous incidents that caused a major effect on the world, be it was the second wave of the pandemic, riots, lockdown, or thousands of death due to the virus. These incidents were notable in history and now there is a recent addition to the list, Great Resignation.

What is Great Resignation?

The term Great Resignation was reportedly coined by Anthony Klotz, a professor at Mays Business School of Texas A&M University. According to him, this mass resignation was highly anticipated.

Starting from spring 2021, the Great Resignation is an ongoing trend of employees leaving their jobs, mainly in the United States. This trend is also known as The Big Quit.

As per reports, these resignations were in response to the COVID-19 as the American government refused to provide necessary employee protection, wages, and incentives despite rising costs of living.

The pandemic made workers question their career choices, work atmosphere, and future goals. Even after rearranging the old work schedule that required employees to come to work in person, employees still preferred work-from-home. Workers of the younger generation are seeking better work-life and thus opting to quit their jobs and find more appropriate work conditions.

In April 2021, nearly 4 million Americans quit their jobs followed by 3.9 million in June. considering the resignation rate from 2000-2021, it never surpassed 2.4% of the total workforce per month.

Resignation rates in the U.S. during the COVID-19 pandemic initially followed this pattern. The quit rate fell to a seven-year low of 1.6% in April 2020. Much of the resignations were given by women who worked in industries affected by lockdowns. According to Microsoft’s 2021 index, more than 40% of the global workforce are considering leaving their jobs.

After the U.S, Germany had the most resignations with 6% of employees leaving their jobs followed by the UK with 4.7%, and France with 2.3%

The Big Quit pandemic hasn’t had much effect on India. People are not rushing to quit their jobs in India since the employment market in India is highly different from the western countries.

Managing Director of the real estate data analytics company Liases Foras said that the absence of social security and unemployment benefits meant the luxury of walking out of jobs was not available to most in India.

Several start-ups have flourished and those companies are hiring in bulk and are ready to pay higher wages. Moreover, work-from-home has triggered changes in the demand structure in the real estate market. There has been a major uptick in the demand for larger homes offices and e-schooling in their properties.

Restaurants and hotels that need people interaction have been hardest by The great resignation. Pandemic stimulus payments and rises in unemployment benefits allow those who rely on low-wage jobs for survival to stay home, although places, where unemployment benefits were rolled back, did not see significant job creation as a result.

Amid the Great Resignation, a wave known as Strikober began, with over American workers participating in or preparing for strike action. This strike along with The great resignation is a trend by workers against the poor working conditions and low wages.