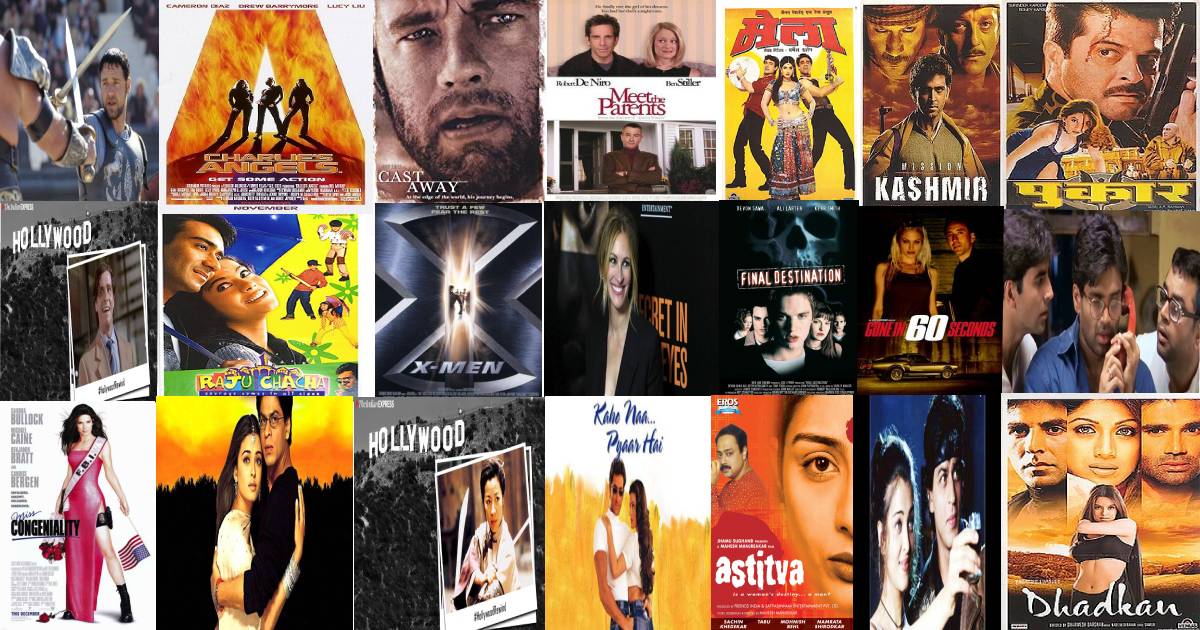 Now that it is 2021 and we are already past a few months. And there is no excuse that all 90’s kids are turning old but even the 2000’s babies on loop. However, when we look back to film history, here are 21 films from the archives that turn 21years, giving us massive antiquated vibes. These films from 2000, make us feel nostalgic, and there is no speculation that they are officially old but worth all your time, would entertain your family and loved ones.

Kaho Na-Pyaar Hai is one of the most successful Bollywood films in 2000. Hrithik Roshan, with his dance moves, gives us incredible perfection goals and leaves us crazy. The film, inspired by Kannada film and Ratha Sapthami. And it also starred Ameesha Patel, Anupam Kher, and Dalip Tahil.

Gladiator is an epic Historic-drama film from the 2000s. The film was based on Daniel P. Mannix’s book, Those About To Die. This film has won many awards and has intelligent casts that included Oliver Reed, Djimon Hounsou, Derek Jacobi, John Shrapnel, Connie Nielsen, Ralf Möller, Richard Harris, Russell Crowe, and Joaquin Phoenix.

Mohabbatein is the most successful Bollywood film in the year 2000. It gave fans extensive love goals, and we definitely cannot get over Shah Rukh with his charming performance, who has never failed to keep us entertained. Mohabbatein starred Shah Rukh Khan, Amitabh Bachchan, and Aishwarya Rai in Lead.

The movie Erin Brockovich is based on an American biographical-legal drama from 2000. This Hollywood film is inspired by the real-life of Erin Brockovich. The film was a hit and received a positive response from the audience. The film starred Julia Roberts as Erin Brockovich, who fought for Hinkley underground water incident against the energy corporation.

The movie Hera Pheri is a comedy-drama, directed by Priyadarshan. It has become a classic cult film over the years, and even after 21 years, it is one of the most popular meme sources. Hera Pheri has always been an evergreen film of all times. So, what are you waiting for? Turn on your film mode.

Cast Away is an American survival-drama film that starred Helen Hunt, Tom Hanks, Nick Searcy. The shoot began in 1998 and ended in 2000, the same year the film was released. The film was shot on Monuriki, which is one of the Mamanuca islands located in Fiji. It was hit and won various awards for the breathtaking plotline.

Josh is the year 2000 romantic-action film. The movie features; Shah Rukh Khan, Aishwarya Rai, Chandrachur Singh, and Sharad Kapoor. The film is primarily in Hindi. With some occasional Konkani. The film was shot in Goa. The film is set in the year 1980, after seeing a backdrop of various real estate deals in Goa.

The movie Crouching Tiger, Hidden Tiger Dragon is a Chinese-frictional film from 2000 that stars Zhang Ziyi, Chang Chen, Chow Yun-fat, and Michelle Yeoh, who are a part of the international Chinese ethnicity. The film is based on a Chinese novel by Wang Dulu. The film was first premiered at the Cannes Film Festival, followed by its theatrical release worldwide.

Mahesh Manjrekar’s Astitva is a bilingual film. The film was shot in Hindi and Marathi simultaneously. The story revolves around  Aditi Pandit, who is happily married to Srikant. She becomes curious as she receives an unexpected fortune willed from her former music teacher, Malhar Kamat. Srikant Pandit tries to figure out the reason behind receiving that will from Kamat after many years of her music classes. However, he somehow makes a discovery.

Final Destination is a horror franchise film that has five parts. The film is a combination of two comic books and nine novels. This film series is one among the best in the horror genre in that the antagonist is not some stereotypical slasher or another physical being, but death demonstrated, casually manipulating circumstances in the environment with a picture on claiming anyone who tries to escapes their destined demise.

Mela is an action-drama Bollywood film directed by Dharmesh Darshan. The film stars Twinkle Khanna, Faisal Khan, Johny Lever, and Aamir Khan. However, it was one of the biggest failures in the box office.

Mission Kashmir is a thriller Hindi-language action film that is produced and directed by Vidhu Vinod Chopra. The film features Sanjay Dutt, Hrithik Roshan, Preity Zinta, Jackie Shroff, and Sonali Kulkarni. The screenplay is written, by Suketu Mehta. The film revolves around a young boy called Altaaf Khan (Hrithik Roshan), who loses his entire family in an accident. The family members are all killed by police officers. He got adopted by a police chief, who is responsible for it, and in a short time, Altaaf finds out this, and he becomes a terrorist to seek revenge.

The movie Gone in Sixty Seconds, also known as ‘One in 60 seconds’ is an action heist-film. It stars Christopher Eccleston, Robert Duvall, Nicolas Cage, Angelina Jolie, Giovanni Ribisi, Vinnie Jones, Delroy Lindo, Chi McBride, and Will Patton. The film was written by Scott Rosenberg, directed by Dominic Sena, and produced by Jerry Bruckheimer. The film is a casual remake of the film, 1974 H. B. Halicki film.

An action thriller film which is directed and co-written by Rajkumar Santoshi. the Cinematography for the film is by Ashok Mehta, Chota K. Naidu, Santosh Sivan, and Baba Azmi. Pukar cast Anil Kapoor, Madhuri Dixit, Shivaji Satam, Om Puri, Namrata Shirodkar, and Danny Denzongpa. The film was highly criticized but get quite well at the box office.

X-Men is a superhero film series inspired by the fictional superhero team of the same name. It first came out in a series of comic books by Stan Lee and Jack Kirby. The movie got published by Marvel Comics. The 20th Century Fox claimed the film rights to the characters only in 1994. And after several drafts, Bryan Singer was assigned to direct the first film. The next sequel in X2 (2003) and the third trilogy, X-Men. The Last Stand was released in 2006. It got directed by Brett Ratner.

Raju Chacha is a Bollywood action-drama film. The film is directed by Anil Devgan and released on December 20th, 2000. The movie featured Ajay Devgn, Kajol. Rishi Kapoor, the lead character. This film was Ajay Devgn's first attempt as a producer.

Meet the Parents is a comedy film written by John Hamburg, Jim Herzfeld. And directed by Jay Roach. The film revolves around unfortunate events around a nurse while visiting the parents of his girlfriend. The film stars Jack Byrnes, Robert De Niro, Teri Polo, Owen Wilson, and Ben Stiller. Meet My Parents is a remake of a movie in 1992 of the same name.

Miss Congeniality was premiered on December 22nd, 2000, by Warner Brothers. The film was a cult right after its release.

The American comedy-drama film was directed by McG and written by Ryan Rowe, Ed Solomon, and John August. The initial part of the Charlie's Angels film series, which was a continuation of the television series, under the same name, was produced by Ivan Goff and Ben Roberts. It is also a continuation of the series story. The film features more comical elements.

Dharmesh Darshan’s Dhadkan is based on the novel Wuthering Heights and stars Shilpa Shetty, Akshay Kumar, Sunil Shetty, and Mahima Chaudhary in lead Parmeet Sethi, Kiran Kumar, Sushma Seth, and Manjeet Kullar in other supporting roles. Anjali leaves her beloved Dev for getting married to the kind-hearted Ram, who is chosen by her father, as her groom. The story takes a twist when Anjali falls in love with Ram because of his humanity and nature. But bumps Dev, now a successful businessman who wants to reconcile with her.