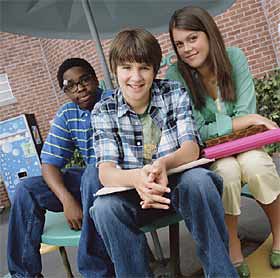 Ned’s Declassified School Survival Guide premiered on September 12th, 2004. The show was created by Scott Fellows who also worked on Big Time Rush. The show stars Devon Werkheiser, who played Ned Bigby, and his two co-stars Lindsay Shaw and Daniel Curtis Lee where “In a middle school full of bullies, insane school teachers, and gross school lunches” the trio and students of James K. Polk Middle School face the peak struggles of adolescents but they can conquer those struggles with helpful tips from the main character Ned Bigby.

Rewatching this show made me realize some of the tips given by Ned are very useful. They vary from how to do better in school to how to avoid getting crushed by your crush. But, everyone who grew up watching this show are now adults who miss the days when their first-world problems were trying to get rid of that zit sitting on their face. But, just because we are older now doesn’t mean Ned’s tips still can’t be utilized. Here are four tips from the series that can still be used in your daily adult life.

With this tip, I can definitely relate it to college. It can be hard for some people to figure out what they want to major in. Especially if you know for a fact that you want to go to college, It is perfectly fine to attend school before making that decision. Explore as much as you can during your first few years of college. If you go to college with a major already determined but after attending classes you are having second thoughts about your career field change it. Do what's best for you! The last thing you want is a college degree in a field you hate. The purpose of college is to discover who you are.

Now I am still working to do this myself. But, I do truly believe this is a must even if you are not a college student. It is important to set goals for yourself to reach the expectations you have for life. For college a semester To-Do list can involve wanting to make the Dean's List, becoming more active on campus, and setting time aside for studying while trying to find a way to balance friendships and priorities. If you aren’t in college a semester To-Do list for you can be seasons of the year. Whether that be saving up for a new car, learning new skills, or finding that dream job.

Season 1 Episode 10: “It’s normal for friendships to have ups and downs. Talk it out when you hit some bumps.”

As adults, we must understand life gets busy and stress can become dominant. The friendships we once had during our childhood are not going to be as consistent as it once was. We have jobs, priorities, and maybe even children now meaning we are no longer free to talk 24/7. It’s up to us to make time for one another and lean toward each other when life gets stressful. As the News Reporters said in the episode, “Don’t fight, talk it out, cause things can get ugly quick.” Communication now has to be a foundation in relationships if you want to make them last.

Season 1 Episode 11: “Sometimes daydreaming is exactly what you need”

As I mentioned before, adulthood can be stressful and with social media adding even more pressure it can be a handful. Taking a break from the comparisons gives you some mental space. Daydreaming as well can stem creative ideas “daydreaming helps you come up with solutions” this advice from Ned could be helpful to college students too. If you have an essay due and have writer’s block take time to read the prompt and come back. This works because it gives you extra time to process your thoughts.

Ned’s Declassified School Survival Guide is a unique show that was ahead of its time. It’s a show that still makes me laugh because of the camera angles used and the jokes that went over my head when the show originally aired. If I could go back in time and use these tips during my middle school and high school years I would. It’s obviously much too late and for now, we’ll just have to settle for what we have. But, who knows, maybe one day we’ll get a Reboot with Ned giving us tips for adulting.