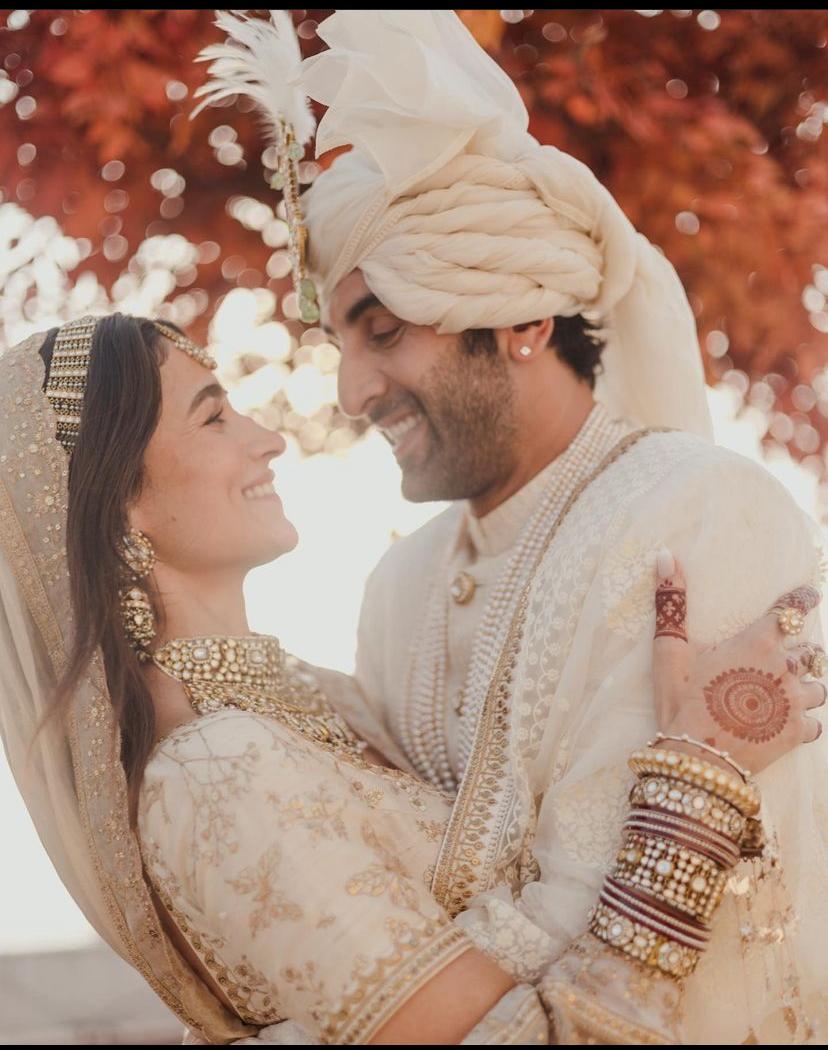 Alia Bhatt and Ranbir Kapoor tied the knot on April 14, 2022 in their apartment. The big day for both of them was quite intimate as very few relatives and friends were present at their wedding. Alia Bhatt is definitely stealing everyone’s heart by breaking the stereotypes as she followed her perception over typical Indian-wedding traditions.

She wore the Sabyasachi saree in white and gold colour which was indeed a bold step by her. She amazed her fans by choosing the white saree as a wedding outfit on her big day. The saree can be draped multiple times with ease and comfort over bridal lehengas.

Ranbir and Alia dumped the concept of wearing green outfit on their mehendi ceremony as both the bride and groom were twinning in red colour outfits, where Alia was seen in a heavy red lehenga and Ranbir was wearing red kurtapyjama.

Alia opted for a minimal mehendi design which was the same in the back and front of her hand and didn’t cross over her wrist. The henna design was basic yet elegant and classy. Being the Indian bride it’s all about heavy makeup and outfit but Alia was wearing a no-makeup look with subtle eye makeup and a very light shade of lipstick. The makeup was next to nothing which anyone can wear in their day to day life.

Adding to it, her hairstyle is surely inspiring every girl for their big day as instead of carrying a heavy bun she chose to let her hair down in a very casual way. Other than that, the most eye catching accessory was her kaleeras. Mostly every bride's kaleeras are umbrella shaped but Alia’s were made in the shape of stars, clouds and bird trinkets in golden colour.

Breaking the conventional rules, Alia Bhatt and Ranbir Kapoor took only four pheras instead of seven pheras on their balcony where they spent 5 years of togetherness. The wedding was held in their own apartment Vastu in PaliHill, Bandra. Speaking to a news agency, Alia’s brother Rahul said that “the ideology behind four pheras was unique and different as the pandit has been with the Kapoors for quite a long time and he also told the meaning of each phera saying that one is for the religion and other is for the children. Living in a multi-tradition family, every ritual is unique and important”.

Fans of both the bride and groom were standing outside their apartment to wish them and to have a glance of the gorgeous couple. The newly-wed couple had set different and classy standards for every bride and groom for their wedding day.

'Kanyadaan': Does It Serve Any Purpose Even In The 21st Century?