Amrita Pritam And Sahir Ludhianvi's Love Story Is Impossible To Bring To An End. The stories of love stay alive even after the characters have passed away. It is such a belief that its buyers are alw 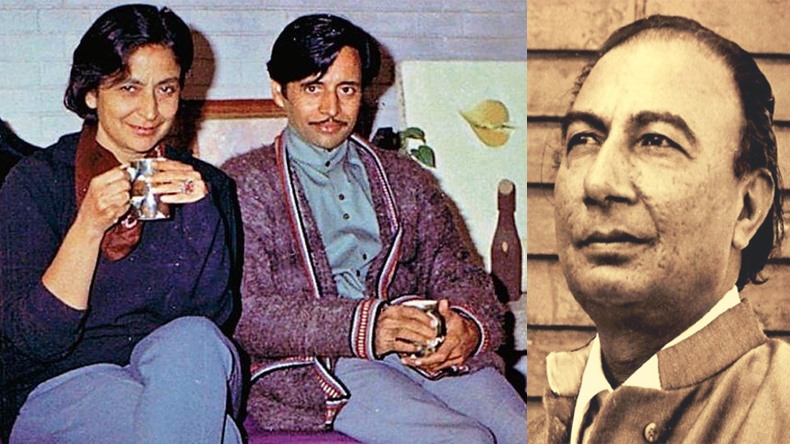 Amrita Pritam And Sahir Ludhianvi's Love Story Is Impossible To Bring To An End.

The stories of love stay alive even after the characters have passed away. It is such a belief that its buyers are always in the market of the time.

Love today. Even today, their love stories create a passion for love in people. The interesting thing about love is that it often falters by the time it reaches its destination. The path goes astray. Sahir Ludhianvi, a famous poet for such love, wrote-

''The story that is impossible to bring to an end.

Good to leave him with a beautiful twist.''

is immortal. It cannot be bound by boundaries, Castes, Religion, or time. The stories of love stay alive even after the characters have passed away. It is much a belief that its buyers are always in the market of the times.

Shirin-Farhad, Heer-Ranjha, Laila-Majnun, or Romeo-Juliet, are bygone eras. But their love is still alive

And this love was not someone else's, it was of Sahir himself.  His love was the famous writer Amrita Pritam.  People say that the more types of people, the more love.  Sahir and Amrita's love was also different from the time and separated from the already drawn lines of love.  This plot was the perfect story of incomplete love, which does not find any other example.

A false cup of tea, pieces of a lit cigarette, some stories, some memories, and much evidence. This was the total deposit capital of Sahir and Amrita's love. It is said to be one of the biggest love stories of Bollywood.

Preparations are made to narrate the story of Sahir-Amrita's love for today's race through a film. Recently the news has come that Irrfan has been signed to play the role of Sahir. Producer Ashi Dua does not break his silence regarding this film. But, before the film, we can remember the unique love of Sahir-Amrita.

This process started about 73 years ago from today.  It's was in 1944, when Sahir Ludhianvi, a fast-rising poet at that time, met writer Amrita Pritam for the first time.  The place was Preet Nagar, situated between Lahore and Delhi.  Look at the turn of luck that this love affair started from a place whose name itself, was Preet Nagar i.e. the city of love.

Sahir was passionate and idealistic.  Amrita is sweet.  In her beauty as well as in her writing.  Both had reached Preet Nagar to attend a Mushaira.  In a dimly lit room, their eyes closed, and they just fell in love.  But, this story of love went in that direction, which had no end and no precedent.

At the time Amrita met Sahir, she was married to Pritam Singh. This marriage was fixed, in Amrita's childhood itself. Amrita was not happy in her married life. After meeting Sahir, a new wave of happiness came into his life.

Amrita lived in Delhi. Sahir in Lahore. Letters removed this distance between two lovers. The body was away. But the heart is close, and the soul is one. So, love continued to be engraved on the paper. Sometimes dark and sometimes bright. Lights filled colors in love. The message of love, was spread between Lahore and Delhi.

Reading Amrita's letters, it is known that she had become addicted to Sahir's love. Amrita used to call him my poet, my love, my god, and my god.

Sahir could have bonded with Amrita.

Akshay Manwani, who wrote Sahir's biography, Sahir: A People's Poet, says that Amrita was the only woman who could persuade Sahir to marry her. Once Sahir Ludhianvi even told his mother Sardar Begum, 'She was Amrita Pritam. She could have become your daughter-in-law'.

But, Sahir was also a poet. And the passion of the poet does not agree to be bound in any bandish. The same happened with Sahir. He fell in love with Amrita but was incomplete. He did not want to fix the distance of hearts. They used to write letters to each other. But the two rarely met. And when both of them met, in the shadow of silence.

In her autobiography Rasidi Ticket, Amrita Pritam has mentioned her meetings with Sahir. She writes that 'When we used to meet, the tongue was silent. Nain spoke. Both of them just looked at each other'. And during this, Sahir used to smoke cigarettes continuously. When Sahir left after meeting, Amrita used to try to feel the touch of his lips on her lips by putting pieces of her lover's cigarette on her lips.

There were many obstacles in the path of love between Amrita Pritam and Sahir.  There was a time when both Amrita and Sahir used to live in Lahore.  Then the country got divided.  Amrita came to Delhi with her husband.  Sahir started living in Mumbai.

Amrita was ready to break the marriage for her love.  Later she also separated from her husband.  She was willing to sacrifice her position and fame as a writer in Delhi on Sahir.

However, Sahir could never be ready consciously to fully adopt Amrita. He could not see the perfect fulfillment of this love. He used to express the love he felt for Amrita with his pen. After all, he was a poet. During that period, Sahir used to write fiercely on all social and political issues. The number of Ishqiya Shayari used to come later.

Still, about his love for Amrita, he wrote a song in the 1964 film Dooj Ka Chand... Seeing Imroz, Sahir wrote

Akshay Manwani says that this song was related to the story of a meeting of Sahir and Amrita. At that time, Amrita used to be with her longtime partner, Painter Imroz. In 1964, Imroz and Amrita reached Mumbai to meet Sahir. Seeing Amrita with another man, Sahir wrote-

''Those who got up from the gathering,

What’s the blame on you guys?

I am a vagabond and defamed.''

In his relationship with Amrita, Sahir had projected himself as a robbed, lost lover.  But this cycle of love was broken when Sahir fell in love with singer Sudha Malhotra in 1960.

When the story of love with Amrita happened, it is difficult to say what was going on in Sahir's heart at that time. Because Sahir was not used to speaking openly. Whereas, he was often attracted, towards women. But he could never openly say 'Hal-e-Dill.

When the love between Sahir and Amrita was on Urooj, Amrita wrote a story.  In this, he had mentioned his first meeting with Sahir.  Amrita hoped that Sahir would say something about it with a pen, if not with the tongue.  But Sahir was Sahir. He remained silent. Neither did he say anything to his friends. Nor wrote anything.

Later, Sahir told Amrita that he liked the story.  But, he remained silent because he was afraid that if he would say or write something, his friends would make fun of him.

Those who know Sahir believe that his mother Sardar Begum, was interfering in his life.  His relations with women were determined according to the influence of Sardar Begum.  Sardar Begum had raised Sahir alone, leaving her husband.  Sahir had seen how many difficulties the mother had to face to raise him.  That is why he respected his mother very much.

Filmmaker Vinay Shukla got the songs of his first film written by Sahir. Vinay says that Sahir was afraid of getting into permanent relationships with women. The big reason for this was the importance of a mother in his life. Sahir loved his mother very much. He respected him a lot. Because of this, he could not give much attention to any other woman. Amrita was the only woman after her mother, who got so much attention from Sahir.

However, Sahir and Amrita's love ended with Sahir's inclination towards Sudha Malhotra. But he could never get Amrita out of his heart. Vinay Shukla narrates an anecdote heard by music composer Jaidev. Once Jaidev went to Sahir's house. Both were working on a song. Then Jaydev's eyes fell on a dirty cup. He told Sahir that how dirty this cup has become, bring me to clean it. Then Sahir had warned him, 'Don't even touch that cup. When Amrita came here for the last time, she drank tea in this cup.

Sahir and Amrita's love was that affair, which could not reach the beautiful conclusion. But this love was very different, it cannot be denied. The love that Sahir and Amrita loved during their times was considered a sin in society. But this relationship was very pure, which both of them handled very beautifully through letters and silence.

This tale of unfulfilled wishes filled two hearts with love. This is a story that will always be in our minds. Even though Sahir played it secretly.

Amrita Pritam has mentioned an incident in her autobiography when she and Sahir were together. Sahir was ill. Amrita Pritam sat next to his bed and applied Vicks on his chest and arms. Referring to this closeness, Amrita has written that, 'I wish! I can live that moment forever.

Even though Amrita could not get Sahir's support forever, but even after decades, this anecdote is etched in people's memories. And whomever Sahir would have collided with those memories, he might have said the same thing-

What was the status of heart wrinkles?

We can never wish again in life.