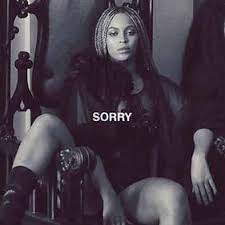 Just by listening to the first minute of “Sorry” by Beyoncé, you can summarize the whole theme of the song with the chorus. It is a song about not caring about what anyone thinks anymore. It can be seen as another feminist anthem by Beyoncé, similar to “Run the World (Girls)” or “Formation”. However, this time she is going through a typical relationship issue. Instead of trying to work through it with her partner, Beyoncé chooses to ignore him by specifically saying “boy, bye”, and not giving him sympathy or attention due to all the pain he has caused her.

Throughout this song, you feel that Beyoncé is exuding confidence and attitude. She is also demanding the respect she rightfully deserves.

In terms of the music, instrumentals are not the focus of this song. I would classify “Sorry” as mostly an R&B song with elements of trap music due to all the beats and rap influences. Overall, the music is very simple and doesn’t overshadow the lyrics and the message of the song.

During the parts of the song where Beyoncé is having fun and telling her ladies to put their “middle fingers up”, the lively music matches the rebellious lyrics and is more danceable. However, there are segments of the song where Beyoncé is regretting her marriage and planning her future without her man. In these segments, she feels heavy emotions like any other person experiencing a broken relationship. So, like before, the music matches the lyrics and transitions into a gloomy and melancholy tone.

Beyoncé is just tired of putting up with unworthy behavior. Beyoncé knows what she is worth and she isn’t going to put up with it. Beyoncé isn’t only thinking about herself now, she is thinking about her daughter (Blue Ivy) whom she mentions in the outro by saying “Me and my baby, we gon’ be all right”. Beyoncé and her baby are going to be all right without a boy (Jay-Z) slowing them down.

This is a very unapologetic song, which isn’t typical for a break-up song. She isn’t begging or crying. Beyoncé is just apathetic. When she says, “I ain’t thinking ‘bout you,” Beyoncé is showing that she doesn’t care for the “boy” anymore which is somehow worse than hating a person.

It is the opposite of love. At least with hate, there is a strong feeling towards a person. With apathy, you feel nothing. Beyoncé even references the feeling of apathy in her music video. The word apathy appears when the video begins. In the “Sorry” video, Beyoncé seems to be speaking to someone who has betrayed her and killed her in a way. Beyoncé says to her torturer, “what are you going to say at my funeral, now that you’ve killed me? Rest in peace, my true love whom I took for granted.” She has reached the apathy stage of grieving.

A criticism the public has had in the past about Beyoncé is that she doesn’t seem relatable. She is this unreachable goddess that is better than everyone else. While I think that is true, not being relatable to the public isn’t exactly good for Beyoncé’s image. When celebrities feel relatable, then they feel familiar and they seem to become more human, just like the rest of us.

Celebrities are human but they don’t have the average human lifestyle. People want to see themselves in their favorite celebrities. Yet, nobody thinks they could ever be Beyoncé because everyone treats her like she is from another planet with her beauty and talent. However, with “Sorry”, Beyoncé is showing that she struggles with the same relationship issues as everyone else. Not even Beyoncé is safe from being cheated on and lied to.

With the song alluding to infidelity on Jay-Z’s part, Beyoncé is showing that she has the same human problems as everyone else. She controlled her public narrative by making herself seem like a normal person going through normal people’s problems. Also, with the way Beyoncé is reacting to Jay’s infidelity, by putting her middle fingers up and by going to the club with her girls, this is exactly the confidence we all want to have when someone has disrespected us. We are still aspiring to be like Beyoncé even though she got cheated on.

Again, Beyoncé is over feeling hurt and just wants to drink with her “ladies”. The music video doesn’t show a single man throughout. However, it does show several women, or her “ladies”, dancing and having fun with Beyoncé on a bus. Beyoncé’s real-life friend, Serena Williams, even shows up to dance with her friend without a man in sight. Men can’t be trusted after being betrayed.

Just like with other pop songs, there is going to be repetition. This song isn’t an exception. Beyoncé is saying sorry continuously. Instead of the sorry being a singular word like the title suggests that she is going to apologize for something, Beyoncé immediately says “I ain’t sorry”. She is not apologizing to her man or his behavior.

This is a major juxtaposition to what women are expected to do. Women are expected to be content in their relationships and not react. If they do react, particularly by getting angry, they are made to feel bad about showing their emotions, people call them “crazy” or a “bitch”. Women, in turn, are expected to say sorry for reacting humanely.

When “Sorry” was released, I remember the uproar, mainly from Twitter, saying that Jay-Z cheated on Beyoncé with some woman named Rachel Roy because she posted “good hair, don’t care” on Instagram. People still think she is the woman Jay-Z was with. However, after looking at the deeper meaning of the lyric “Becky with the good hair”, I don’t think that is the case. Obviously, with the context and lyrics of the song, Jay-Z cheated or disrespected Beyoncé in some way. However, I think that when she mentions “Becky” she means the name that the Black community gives to an average-looking white woman.

While “good hair” would be the long, straight hair white women have that is considered to be beautiful by American beauty standards. With this closing line Beyoncé is saying to Jay-Z, go ahead and be with someone easy, I’m not going to deal with you anymore.