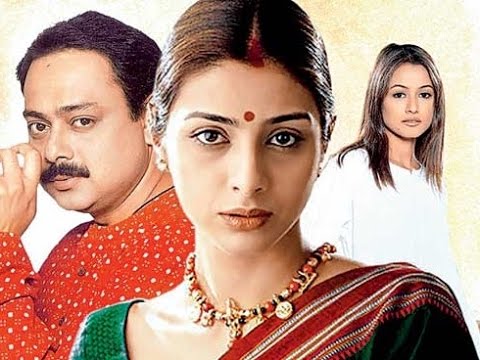 As the word ‘ASTITVA’ means ‘identity, the film reflects the same. It was a story of the woman ‘Aditi’ and her journey from being an ordinary woman to an extraordinary woman. It was about a woman trying to find her identity outside her marriage.

In the beginning, she was a perfect example of a middle-class, ordinary woman --- whose options have been foreclosed by marriage and children. She was presented as a victim through self-sacrifice. She was dependent for her ‘well-being’ and ‘fulfillment’ on an institution – ‘marriage’, ‘motherhood’ – that, by translating the word ‘woman’ into ‘wife’ and ‘mother’ end her independent identity.

She was married to ‘Shrikant pandit’ (Shri). A self-centered, male chauvinist. He was a perfect reflection of the Indian patriarchal system. He loved her wife and also had many extramarital affairs. He believed that women suits more at her home rather than working outside.

Malhar Kamat was a musician and Aditi's teacher who want her to pursue music as a career. But both end up having a physical relationship and then a kid (Aniket) together. There were two other important characters name, ‘Meghna’, and ‘Revti’ (Aditi's daughter-in-law) best examples of extraordinary women. They live their life based on their choices. They never compromised with their self-respect for anyone, not even for their husband. They had a different kind of thinking standard than Aditi. They were the woman of their choices.

After two years of marriage with Shrikant, Aditi was alone because of Shri’s continuous absence due to his official trips. She feels bound to adhere to morality which demands that she stifle her own “illicit” creative or sexual urges in support of a society that tolerates considerably more deviation on the part of her husband. Being part of this patriarchal system, her husband does not allow her to work outside. During this period, she met Malhar –a music teacher, opposite to her husband, want her to pursue music as a career. In times of loneliness, she met him, feel attracted to him, and so does he. Her sexual urges were satisfied by him. Being an ordinary middle-class woman, she considers her relationship with Malhar as a sinful act. She was ready to sacrifice Malhar’s love for her husband, but this relationship ends up by her pregnancy. She feared losing her husband. So, she kept this secrete from her husband as convinced by her sister.

After twenty-seven years, Malhar prepares his will, where he leaves his entire property to Aditi. The will reaches Aditi after two years of Malhar's death. This will made Shrikant doubt her wife’s past life. He found out about her love relationship with Malhar and the truth about her pregnancy. This truth made him separate his ways from Aditi's. For him, a woman, more particularly, his wife, cannot have any kind of relationship with another man. Being a part of this patriarchal system, he considers his wife unacceptable. Even for her son (Aniket), she was no longer an idol. For Shrikant, Aditi was acceptable because of the choice she made twenty-five years ago.

Aditi decided to step out of this marriage for her welfare. She doubted herself on how she can spend twenty-seven years of her life for a man, who never consider her equal, nor respected her choices. That was the moment where she decided to live her life her way. To give priority to herself, to be an extraordinary woman. She presented a mirror to her husband, who considers himself more devoted toward his marriage, even though he had an extra-marital affair. She showed how she became an ordinary woman. Who sacrificed her career, her identity, and ever her body for him. Her decision to end this marriage made her an extraordinary woman from an ordinary woman.

Although I am enlightened by the character of ‘Meghna’, the way she encouraged Aditi. Also, not just for her career, but to live her life on her own choices. Her choice of love and profession are the qualities of an extraordinary woman.

The movie “Astitva” could be a perfect example of the category of women’s film-- In which ‘ordinary women who became extra ordinary’, the women who begin as a victim of discriminatory circumstances, and give rise, through pain, obsession, or defiance, to become the mistress of her fate.

This film leads us to question the acceptance of women and men after having an extramarital affair. Also, how the society accepts men despite having relationships with other women, and on the same part how women are considered impure and unacceptable on having a relationship with another man. How wives are considered a slave of her husband, and marital rape considered as the part of the society. The film depicted the concept of sacrifice and choices she made, her decision on which her future happiness depends. This film reflected upon the fear of breaking social reforms set up for women by this patriarchal society, how she feared being an extraordinary woman, how Aditi tried being a free woman, being a unique woman.