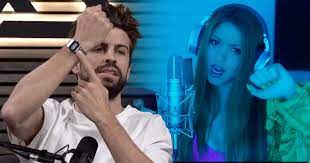 Shakira recorded a song about her ex-boyfriend Gerard Piqué after a difficult breakup that supposedly ended due to infidelity. The music video has received more than 63 million views in 24 hours.

She has broken the record for the biggest debut of a Latin song in Youtube. The release of her Bizarrap session has made her join the distinguished group of Latin artists, including J Balvin, Luis Fonsi, and Daddy Yankee, who have broken YouTube records as well.

After dating for more than ten years, Shakira, 45, and former Barcelona footballer Pique, 35, had split up in 2022. The couple stated in a statement that they were focusing on co-parenting their two children, Milan and Sasha, aged 9 and 7.

Both have remained silent over the allegations that Piqué cheated on Shakira near the end of their relationship. However, the soccer player has been coupled to 23-year-old student Clara Chia Marti after they were seen together enjoying their weekend break in Prague.

In a four-minute pop tune, Shakira collaborates with Argentinian producer, DJ Bizarrap where she speaks on Piqué's claimed new companion Clara. In the diss tune, she compares the relationship to trading a Rolex for a Casio and says that she is "worth two 22-year-olds.”

The Colombian singer also makes mention of her dispute with Spanish authorities, who say she owes them €14.5 million (£12.8 million) in back taxes. In the song, she seems to be claiming that Pique abandoned her while all of this was happening, with her in-laws living next door.

However this is not her first song about their split. She released Monotonia three months prior and it focused more on heartbreak than on seeking retribution.

Although he hasn't made any official public comments on his social media accounts or to any news publications about the song, Piqué has been writing about his most recent Kings League which is a seven-a-side tournament streamed on Twitch. He however, did respond to Shakira's comment about the change in watch when he was on a Kings League live Twitch stream with Sergio Agüero.

“We have reached an agreement with Casio," Piqué claimed, pointing to his Casio watch and referring to his new King's League project. He continued, "This watch is for life."

The 35-year-old, who is the president of a 7-a-side league, had taken Shakira's Casio reference in harmless spirit and secured the sponsorship of the watch company for his squad.

He said, raising his wrist, "Casio has sent us wrist watches." stating that they came to a sponsorship agreement, and Casio and the King's League agreed to a partnership.

Piqué then starts giving the watches to his other live streamers after being questioned if it was a joke. After an awkward pause, Agüero answered directly when asked why Gerard made the move, leaving everyone in stitches.

He said with a straight face, "It was because of Shakira's song.” Those involved in the stream, including former Barcelona and Manchester City star Sergio Aguero, erupted in laughter.

Even with Shakira’s disstrack, Piqué does not seem to be hurt by it or at least he does not want it to seem off that way. It might just be that he is happy in his new relationship with Marti.