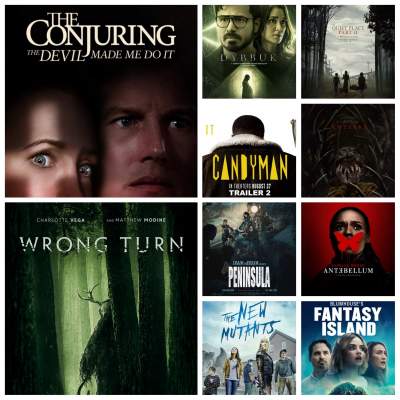 There is one thing that all the best scary movies have in common: they tap into your deepest fears. Something is unsettling about horror movies because they portray the very things you'd like to avoid in real life. And if you are a horror movie lover you enjoy these movies.

Check out these Scary movies for the scariest movies you have ever seen. Turn off the lights, grab some popcorn, and get ready to be scared.

1. 'The Conjuring: The Devil Made Me Do It' (Hollywood)

Plot: This part is the 3rd of the Conjuring series, an officer stumbles upon a dazed and bloodied young man walking along the road and Ed and Lorraine Warren are dragged into one of the most sensational cases of their careers. A murder suspect claims possession by demons as his defence, and the Warrens are forced to launch an investigation, unlike anything they've ever played.

Plot: In this horror film, Jen (Charlotte Vega) and friends set out on a hike along the Appalachian Trail, where backwoods horror meets nerve-jangling suspense. Although warned to stay on the trail, the hikers stray from it and enter a hidden community of mountain dwellers known as The Foundation. These people use deadly means to protect their way of life. As Jen and her friends are suddenly attacked, it looks like they have no chance of making a great escape unless Jen's father (Golden Globe® nominee Matthew Modine) can save them.

Plot: As the Abbott family fights for survival in silent compliance with their fears of the outside world following the tragedy at home, they now must face the cruelties of the outside world. In trying to discern what lies beyond the sand path, they quickly realize that creatures that hunt by sound are not the only threats.

Plot: It has been said that a ghost story concerning a supernatural, hook-handed killer terrorized the housing projects of Cabrini-Green for decades Unaware that his investigation into the past of Candyman will unravel his sanity and unleash a wave of violence that puts him on a collision course with death, an artist investigates the macabre history of Candyman.

Plot: This is a story involving a young child who is harbouring a dangerous secret, discovered by his teacher and her brother the local sheriff.

Plot: Train to Busan Presents Peninsula- An ex-soldier, Jung Seok, and his teammates battle zombie hordes in the Korean peninsula wastelands after the end of the world.

Plot: A Famous Author Veronica Henley is about to return home to her husband and daughter, after completing her book tour. But before she returns home, events take an unexpected turn that forces Veronica to confront her past, present, and future.

Plot: The story of The New Mutants starts when 5 teenage Mutants named Mirage, Wolfsbane, Magik, Cannonball & Sunspot, are invited by Dr Cecilia Reyes to share their stories at a secret institution that will cure them. Their memories soon become terrifying realities as they begin to question why they're being held and who is trying to harm them.

Plot: Guests at a luxurious tropical resort are privileged to achieve their secret dreams when Mr Roarke (the enigmatic host) fulfils their fantasies, but as the mystery of the island is unravelled, fantasies become nightmares.

THE OTTs AS EYE OPENER- The return of "Content" through OTTs