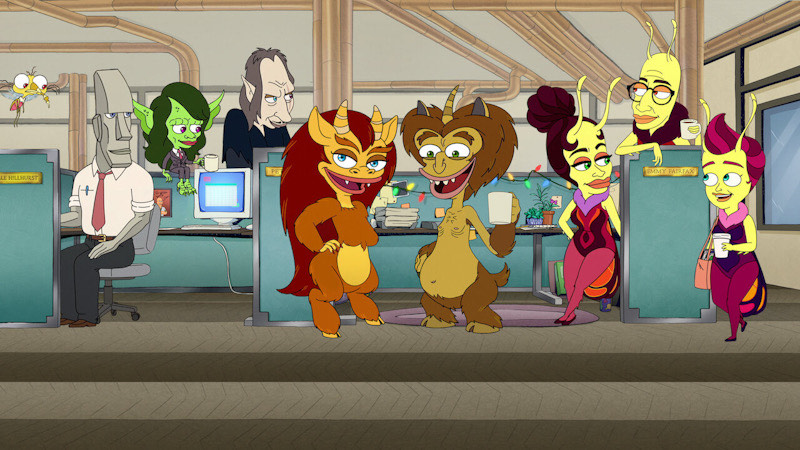 Human Resources is a spin-off of the show Big Mouth. Created by the comedian Nick Kroll along with Kelly Galuska, Jennifer Flackett, and Mark Levin. It is an animated show on Netflix that centres around the workplace of Hormone Monsters dealing with adult emotions as opposed to Big Mouth’s Hormone Monsters which deals with hormonal pubescents.

To sustain the theme of stardom and to preserve the reference of loosely basing the comedy on Nick Kroll's early life, we observe that the animated characters were designed in a way to reflect the mannerisms and physical features of the voice actors.

Human Resources outperforms other adult animations by featuring more well-established guest voice actors, such as Janelle Monáe, whose song, Make Me Feel, also serves as the show's theme song, as well as Hugh Jackman and Lupita Nyong'o. Having so many characters as the focus equals more plots and more layers. Episodes are allowed the opportunity to focus on a certain character and gain an understanding of their perspective, all with the goal of keeping the viewer enticed.

What is charming about the animation is that it draws similarities with the developing tweens from Big Mouth, as they go through the trials and tribulations of figuring themselves out. Polygon describes it as the adult, raunchy version of Pixar’s Inside Out, which is a children’s animation set within the mind of a young girl. There is a control room with the five major emotions contending for dominance.

Becca Lee’s character is an example of an adult dealing with change; she is first shown pregnant in early episodes, and then the audience becomes privy to her journey through postpartum challenges. According to Up To Date, Dr Berens, a professor of Obstetrics and Gynaecology at the University of Texas, postpartum is the period following childbirth when there is a physical and psychological change in the new mother.[1]

As serious as postpartum depression is, it is oddly under-discussed, and specialists are still uncertain what causes it and how to completely prevent its symptoms. Becca struggles to adjust to an extent where she questions her love for her baby and husband. These are just one of the many symptoms mothers worldwide from different classes, cultures, and age ranges experience after childbirth, which is greatly misunderstood, and Human Resources makes it a little less strange by addressing it.

The Need Demon is another creature introduced to the audience. They emerge as crudely drawn scribbles when a human has a desperate want or drive that must be satisfied. Their appearances are decided by their clients' pressing requirements. The writers do an excellent job of using the Need Demon to mirror us when we become overburdened with life's responsibilities. As adults, we push back the responsibility of prioritising our needs, which demonstrates the detrimental consequences of not attending to our well-being.

Need Demons can arrive at various phases of a person's life and become stronger when their desires are gratified immediately.

When we as adults overreact, become anxious, or overindulge in things we do not intend to, the conscious in our heads approaches us. Pete the Logic Rock, played by Randall Park, is the voice of reason who guides his clients to make rational judgments. He encourages people to be rational and practical rather than acting on their instincts and impulses. Pete’s job is to approach every problem logically.

According to Psychology Today When our thoughts reach the amygdala, they either overwhelm us in anxiety or liberate us from its grasp. The amygdala is where emotional memories form, and where anxieties can bind us to the certain and familiar. Words wired into the brain in childhood have an impact that extends beyond the thinking cortex and into the primal emotive brain. Pete the Logic Rock can be described as the thoughts that liberate us from anxiety’s grip.

Just like the adolescents in Big Mouth, the writers are able to convey that adults can have insecurities as they try to figure out who they are. Adults may have more life experience and be more self-sufficient, but this does not imply having life figured out. Emmy is a love bug, but she is not an ideal love bug since she is an assistant who is uneasy about her job and abilities, drinks frequently, and is in an unhealthy sexual relationship. She is dubious that she can handle her job because she was an assistant who was promoted by default. We also become insecure and question ourselves as adults, even with the life experience at hand.

Human Resources also shines the light on the subject of death. Yara is a character introduced to explore this uncomfortable topic. Yara is an older woman with dementia and her son finds it difficult to come to terms that his mother is impending death. Keith from Grief, the monster who is illustrated as a cosy jersey, is introduced to the audience at this point whose objective is to assist Amir to come to terms with the realities of life's cycle as Yara's death approaches. Death is the only thing in life that is guaranteed but it is unpleasant as it is mysterious and painful, due to the loss we experience. Human Resources, as a comedy, puts this to light, reminding us that death is due to come along and stresses the importance of dealing with the emotions felt when a loss is encountered.

It is safe to say that Human Resources is a show that is relatable and addresses interesting topics that we face as adults and is extremely funny while it does that.