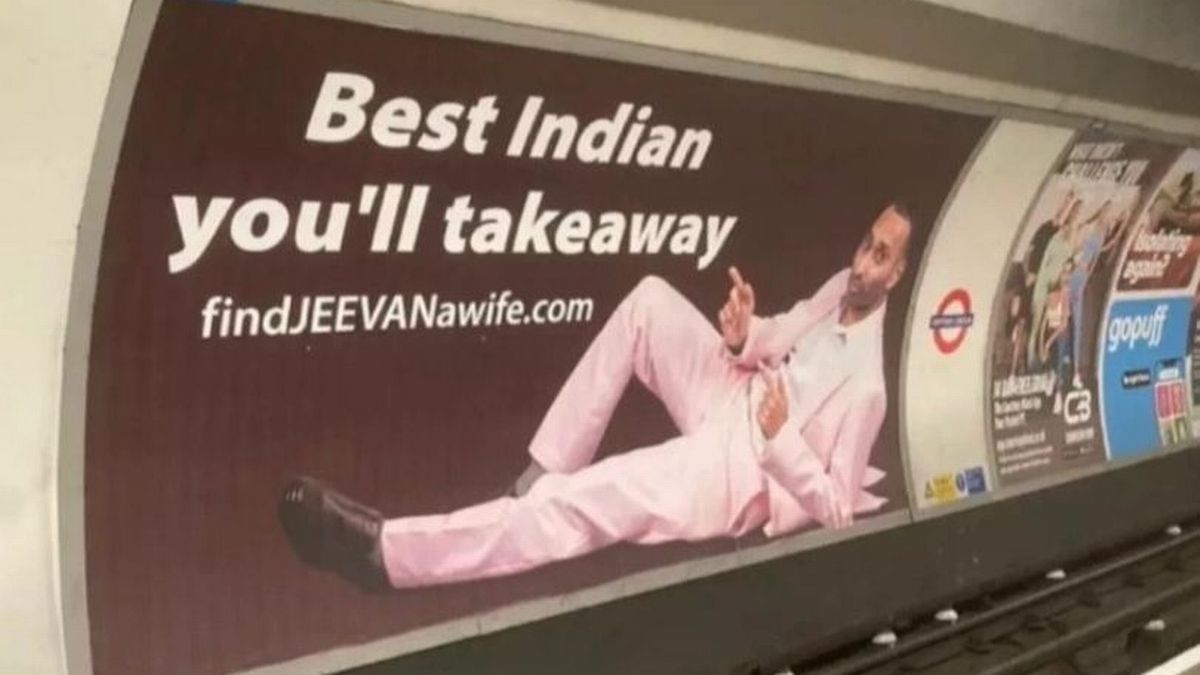 “It is a truth universally acknowledged, that a single man in possession of a good fortune, must be in want of a wife.”

These immortal words written in the backdrop of eighteenth-century England are once again brought to justice by Jeevan, who in a quest for his bride has started a ‘Billboard Campaign.’ Jeevan Bachu, a 31-year-old marketing professional who has spent £2000 for plastering his face on a 20-foot-long tube ad is looking for his soulmate.

Tired of online dating apps, where just a right swipe governs romance, Jeevan has started his own website findjeevanawife.com where the ‘fortunate’ female bachelors would find a medium to tell him about their hobbies and upload their pictures. The Unique Selling Proposition of this ‘Jeevan only’ website is his signature pickup line, “best Indian you’ll take away.” For this cheesy tagline, he was bothered by TfL (Transport for London) for advertising junk foods that go against their norms. It took him a while to make them realize that the advertisement had nothing to do with junk and takeaways.

Popatlal is a character in the famous Indian sitcom, Taarak Mehta ka Ulta Chashma, who is middle-aged and desperate for marriage. He is often seen finding love in marriage bureaus, matrimonial sites, and newspaper ads. Jeevan could be characterized as a brave love-seeker, as in this widely digitalized and meme-culture, he dared to depict his needs aboveboard, both metaphorically and literally.

Unfortunately for young females, these large billboards (till now) are only up for display at the Central and Bakerloo lines at Oxford Circus, London. Jeevan is following the lead of Muhammad Malik, who had earlier unleashed several Billboards across major cities in the United Kingdom. All a female bachelor needs to do is fill out a form using his website if they want Jeevan to approach them. He claims to have received 50 advances till now even after a dull opening due to the ongoing tube strikes. ‘Some are genuine, some not so genuine. I’ve got to sort through them all and see if anyone catches my eye’, noted Jeevan.

On a serious note, Jeevan’s humor-filled yet serious campaign in search of a wife is far better than any misogynistic and objectifying matrimonial ads in newspapers that demand a ‘white, homely yet convent-educated, good in household chores and brahman wife’.

He classifies it as similar to getting jobs as people are mostly free while waiting for trains, and thus it is a genuine tactic to hand out CVs at the time. Therefore, using his genius business tactic, Jeevan figured that people would have a look at his billboard in-between stations while scrolling through their phones. He’s more interested in a meeting than swiping or texting and these covid induced lockdowns have concretized his wish for a ‘Jeevan Sathi.’ Thus, this is a more honest approach in finding a soulmate than any of the fraud newspaper advertisements or crying over a 90s Shahrukh Khan-led rom-com.