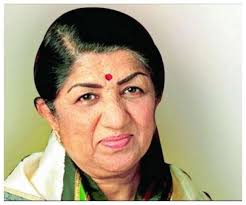 Called “The nightingale of India” or Lata Ji admiringly,Lata Mangeshkar's death has left millions mourning. Her career which spanned over nine decades is studded with glorious melodies which are still the choice of airwaves across the country. Let's look at her work and the heritage she left behind.

Born on September 28, 1929 ,in the city of Indore, Madhya Pradesh India, Lata was born to the renowned theater artist Pt Deenanath Mangeshkar. She was the eldest of five siblings. All the five of them coincidentally entered the Hindi music industry. Her father was a big influence on her. He not only acted in theater but was also a hindustani classical musician and composer.By 1930s Lata started acting and singing in the same theater as her father.

Lata’s first break as a playback singer was offered for a Marathi film called Kiti Hasaal. She was 13 years of age at the time. Her first acting gig was also in a Marathi film called Pahili Mangalagaur.While she entered a career which was to last for the next 80 years, the year wasn't all full of fortune. She was struck by a personal tragedy. Her father, Deenanath succumbed to an illness and passed away leaving a 13 year old Lata and her 4 younger siblings behind.

Lata was mentored by Ustad Aman Ali Khan, an esteemed music gentry from Bhendi Bazaar gharana. Once speaking of her guru, Lata told a reporter “Khan saheb was a very kind-hearted, systematic and benevolent guru”.Lata gradually climbed her way into the Hindi film Industry, her entry being with the film “ Aap Ki Seva Mein” in 1946, directed by Vasant Jogalekar. In 1949,At age 20,two of the films where she sang became huge hits- “Mahal” starring Madhubala and nine songs for the film “Barsaat”

As euphonios her voice was, so was her conviction to stand for what she felt needed to be voiced. Lata organized singers from the industry to fight for their credit on music records by big labels who were entering in exclusive contracts with singers but weren't giving their due credit on the records.

By the 1960s there wasn't a movie without Lata singing for the lead.She worked with all the noted composers of the decade few of which include Naushad Ali, Anil Biswas, SD Burman.She sang parallel to Kishore Kumar and Mohammad Rafi. Her voice stirs a myriad of emotions in her admirers. In January 1963, Lata was called on to Ramlila Maidan , Delhi to perform on the Republic Day. Her song “ Ae Mere Watan Ke Logo”,written to commemorate the martyrs of the Indo-China war, moved the then Prime Minister ,JawaharLal Nehru to tears.

In 1969 Lata was awarded the Padma Bhusan, the third highest civilian award in the country. In 1972 she won her first National Award for the film “Parichay”. By this time she was signing across all genres, languages and audiences. She sang 700 songs for the composed Laxmikant Pyarelal alone.In 1974, she won her second National Award for “Lekin” followed by Dadasahed Phalke award in 1989, third national Award in 1990 .Another record breaking patriotic song of her came in the form of Rehman composed “Ma Tujhe Salam” in the year 1997 to mark India’s 50 years of Independence. Within the next few years, India’s second highest civilian award Padma Vibhushan(1999), and the highest civilian award Bharat Ratna( 2001) were also studded into her crown.As she entered her 8th decade of career she launched her own music label called LM Music.The frequency of her releases decreased but the impact was maintained till the last years of hers.Her demise on 6th of February 2021 brought grief to millions of her admirers.Her legacy will continue to inspire musicians for decades to come.