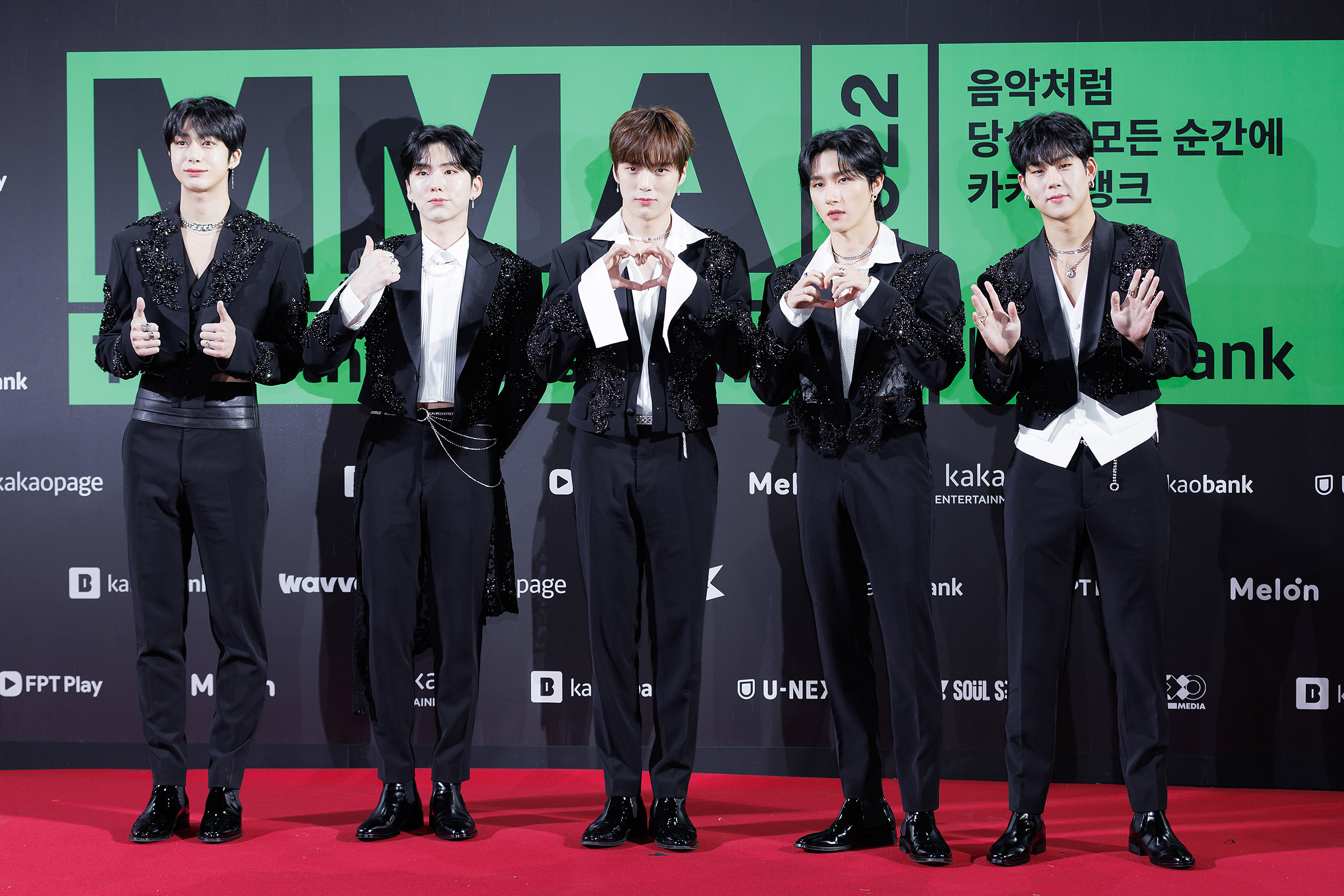 As part of a rarer third generation of K-Pop representation in the 2022 Melon Music Awards (MMA), South Korean sensation MONSTA X has ended the year by demonstrating outstanding performance quality. The boyband has proved that they are still standing strong after seven years of working in the music industry and they have even more things to show the audiences.

Receiving the Global Artist Award in this year’s MMA has boosted the boyband’s energy and confidence to another level. This was shown in their subsequent performance after obtaining the award. They performed two main title tracks, ‘LOVE’ and ‘Rush Hour’, from their respective albums ‘Shape of Love’ and ‘No Limits’. Both songs were produced by Joohoney, the main rapper of the group, and skilfully composed by the rest of the group’s members.

The performance started with the song ‘LOVE’, opening with a breathtaking close-up shot of Hyungwon’s visual. Wearing a black crop-top suit with chains, diamond necklaces, and a bare harness, he represented the sexiness, hard-to-resist charm, and overall gentlemanly atmosphere surrounding MONSTA X.

The stage was covered with a gold theme and yellow-brown colour palette, delivering a classy and luxurious feeling. The two corners of the stage consisted of the musicians playing trumpets, saxophones, guitars, drums and piano; a rare thing to see in South Korean performances since most beats are pre-recorded. This stage reminds audiences of Ariana Grande’s ‘Focus’ performance at the American Music Awards (AMAs) back in 2015 with a similar layout and structure.

The first half of the song had been rearranged and remastered into a jazz version, which matched the tone and meaning of the song better than its original version. After their past cover of ‘Versace on the Floor’ (Bruno Mars), MONSTA X received a lot of positive comments. This did not disappoint the fans as they finally brought this kind of performance back.

The second half returned to the original song's genres as it ventured back into the realm of classic R&B and hip-hop. The two elements were unique from one another, and the harmonious vocals made it a successful and unusual blend. The growls of Joohoney were also seductive, and Kihyun beautifully hit the high notes with his falsetto and adlibs. The sexy choreography and intensity suited the tune, with I.M.’s cane bringing an elegant aura.

On the other hand, their second song of the performance, ‘Rush Hour’, brought a completely different energy. It had the same adrenaline-pumping melody, uplifting beats, and aggressive electronic instrumentals as earlier MONSTA X title tracks. But some tense whistling was what made Rush Hour distinctive.

The version MONSTA X decided to perform at the MMAs this year utilised the sound of electric guitars to the finest. It had the power to blow up your mind. This was the perfect ingredient added to the authentic song as it elevated the crazy energy of the track to the ultimate level.

With an intense yellow-red-brown colour palette as the main theme and a batch of backup dancers with big red flags of the MONSTA X logo, the boyband successfully wielded both a cowboy and racing theme simultaneously. Their military parade jackets with gold big chains have added to the powerful, sexy and classy feel. They looked intimidating and fierce but were charming and irresistible at the same time. The performance was energetic and aggressive, as you would expect from MONSTA X. Joohoney and I.M.’s swagger and confident facial expressions were on point. Minhyuk and Kihyun’s bold eyes enhanced the toughness of the performance.

Winning the Global Artist Award in this year’s MMA marked the first in-person award of MONSTA X since the outburst of the COVID-19 pandemic in South Korea. “As we received the Global Artist Award, I could see MONBEBE (MONSTA X’s fandom name) around the world in front of my eyes. And I missed them a lot. It has been a really long time since we came to an award ceremony. We will work harder,” MONSTA X shared their feelings on their YouTube channel.

MONSTA X's "mini-concert" at the 2022 MMAs showcased all of their skills on stage, with live singing, hard-core choreography, and just the right facial expressions to match each movement of the songs. Their dedication and energy are still the same as their first stage debut of ‘Trespass’ seven years ago: wild and spirited fire with the added sexiness and maturity of adulthood.