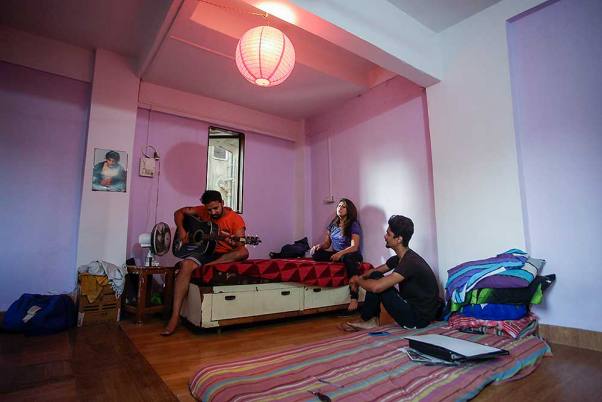 People enter here to exercise stardom, but how exactly do they live before either becoming a star or end up as a common man.

Cinema is a dimension where one forgets reality. Forgetting reality and living pseudo-life is our current position in this material world. We watch films and love the Heroic personality just because 'Aham Brahmasmi,' which means, “I am divine.” There is a subtle feeling that eats us from within, like a bug making us feel like we are nothing. Films have attracted a plethora of strugglers. Everyone wants to become famous and wants likes, shares, subscriptions, tweets, snaps, and whatnot. Not everyone gets the chance to serve people and entertain them. Everyone has an opportunity, but not everyone can conquer the ladder of failure. Today we will listen to the strugglers and scrutinize their struggle. Everyone has their story and is stumbling due to politics. "If I want to become a 'Mega Star', then I must assassinate lakhs of dreams. Usage of the word 'assassinate' indicates the necessity of that action. With the emergence of OTT, Social media platforms, Entertainment has become a million dollars business. Everyone who dreams to become an actor, does Theatre and finally has to start struggling in Mumbai. The city of dreams has various cultures intermingled with each other. Moving ahead of time is known as a trend in Mumbai. Where the identity of being Indian vanishes slowly, and the act of acquiring Western etiquettes begins quickly, IndoWestern Civilisation.

Living in Mumbai on a rental basis or cot basis is a strenuous thing. Malad, Goregaon, Andheri, are widely known as Filmy areas, just because various film, serial, studios, and production houses are situated in these areas. I was curious about the life of Actors when they don't have work. What they did, how they managed their lives financially, what they read, and many more ornaments through which they decorated their struggle. Various strugglers live with each other and share flats. Not a single barrier comes between them. Boys and Girls live together but have no relation except friends. The Entertainment Industry is that umbilical cord that joins them and keeps them connected. Everyone unknowingly participates and witnesses each other's stories. Few excerpts from the interviews and few dialogues with artists will highlight this entire issue of struggle for survival and existence.

Vitthal Society, Mhada Colony, Mumbai is the beginning location of this narration. Almost five dreams were breathing here. Due to Lockdown and virtual new normal, auditions happened online and after sending auditions to nearly 58 casting directors, they got reverted from just 2 people.  People say artists are supposed to do struggle to get a chance to perform but I think, the struggle of a decade or so is not about searching for work but is about augmenting our contacts. One amongst them told, ‘’Just for doing Mob scenes and for standing in the crowd, we need a strong reference. ‘’ Politics hasn’t left any field unaffected. The entertainment industry also is not an exception. They used to wear torn clothes, used to eat Khichdi and Egg Omelette just because it is affordable. They didn’t have money but were supposed to do anything to meet basic expenses. They did small character roles to achieve a working link. Work link is an important element as it is necessary for showing the quality of our work. Discussion on upcoming films, web series, and auditions, was intriguing for a guest like me. They used to perform there in front of a mirror and recite poems from Rekhta. When they met a new person from any other production house, they immediately took the number of casting directors and creative heads just to contact them and ask for work.

The most interesting element in this two-day investigation was, they pasted a poster on the door of the bathroom which had a pledge written by Satyadev Dubey. It is advice given to every young Indian who wants to become an actor. He instructs that, becoming an actor is not everyone’s cup of tea. People don’t understand that for becoming an actor we need that spark. We must develop that real element wrapped in a cinematic garment. The actor is not just a flesh of looks, features, and craft but is a product of efforts. Becoming an actor and Star are two entirely different things. Craft is requisite for becoming an Actor and Destiny is required to become a Star. After becoming a star, we have to put our soul and experience the meaning of the word Meraki to sustain and preserve that stardom. We are supposed to dive into the ocean of cinema but after studying the right direction. An actor must dance, sing, mimic, etc to improve his level. He also must practice doing action sequences. He must portray every lie as truth with ultimate reality and conviction. Characters and their stories are full of emotions. Anger, Jealousy, Hatred, Romance, Fear, etc. are the layers and dimensions that must be explored.

An actor must delve into imagination and experience it on the grand canvas of artistry. Books are the traditional but most reliable medium of exercising this. Sigmond Freud was being read by those actors for understanding our mental situation to create a mental situation of the character. Books on Voice modulation and theatre exercises written by Dr. Shreeram Lagoo were also living with them in 1RK.

Why was such an important pledge posted on the door of the bathroom? This question was disturbing me and pricking me like a metaphorical and inquisitive thorn. I asked him about this and he answered,

We stand outside the bathroom and wait for our number to come and then go to take bath while waiting, we read it and gain self-motivation, and then after taking bath we prepare ourselves to grab everything that comes on our way. This pledge has taught us to celebrate the happy moments and to digest the rejections as well. Cut to, next instance. I’m using 'cut' just to emanate cinematic ambiance.

Saptarshi Apartments, near Bhoomi Mart, Malad. is the second location where the second half of this narration will take place. The flat was emanating positive vibes. As soon as I entered, I saw a person chanting some verses from religious scriptures and offering incense sticks to the lord. Incense sticks were permeating in the flat and perfuming the entire surrounding. Divine perfume took an exit in 15 minutes. fragrant ashes were visible on the floor. Cigarettes were ready to dismiss the spiritual aura and create material trips.  Three huge containers were kept in the hall, where the residue of smoking used to get saturated. Everyone was a smoker and everyone had that addiction of escaping from reality. They forgot the pain and wounds of rejection and depression when they did this. 8 out of 10 people were either a smoker or drinker. I called a person before coming to this flat and asked for a room but was shocked after hearing him. I would love to share the conversation in the form of Chats. I don’t want to disclose his name and his pseudo decency.

Me: Hello Sir, I got your number from a decent girl and she said to contact you regarding

Sophisticated Person: Yeah, Sure. I want to clear one thing, that is, we are in search of a sophisticated person just like me. One who is from a disciplined family and has got conventional upbringing. Smoking Cigarettes and Drinking alcohol are okay, because everyone does it, but decency is a prerequisite.

Me to my inner self after hearing this, we aren’t at that level of cultural and conventional peak that we can live here.

When the darkness emerged out of Moon and made everything a secret, these people used to start drinking alcohol and criticize each other’s work. They also used to blaspheme every other artist. Nothing remained a secret. After vomiting the ruckus, they ate the sleep just for 4 hours or so and again were ready to face the camera and listen to that sound of clap. Sitting beside them and listening to the insights of the industry is more entertaining than, watching a film.

Films and the entertainment industry have a dark side of the struggle it which makes it more challenging for dreamers. Escapism is the fundamental reality and taking the audience into imagination but still being natural and real in portrayal is an arduous task. Emotions are a one-time phenomenon but controlling them and using a remote of craft to operate them whenever needed is a skill. Let’s not enter into this side of Entertainment. Every action is out of depression and anxiety. People don’t digest a single rejection healthily and expect an actor to digest it for consecutive 10-15 years. Despite the darkness in his/ her life, an artist entertains us and forces us to forget our dark moments. Let’s just sit in the darkness of the theatre and try to forget the loopholes in the journey of artists and salute them for making us laugh. Every character has a mask and an actor wears that mask just for us. In this journey, he/ she also forget their real face but still, wanders here and there and serves us.

I salute them for their service.

Battling Depression : the truth is out (2)