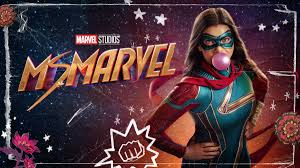 The first episode of the new Marvel series, Ms. Marvel, just premiered on Disney+, and the episode ends with the perfect description. Cosmic.

This is a spoiler-free review. All opinions are my own.

Ms. Marvel is presented as a classic coming-of-age superhero story, in the likeness of “Kickass” or the MCU Spider-Man trilogy. Kamala Khan is a daydreaming high school junior from Jersey City, New Jersey, who happens to be a huge Captain Marvel fan. After preparing her cosplay costume for the first-ever AvengersCon, she discovers mystic powers, presumably from a family heirloom. The origin and mechanics of her powers contrast with her comic book roots but will be explored further as the show continues.

First impressions after the first episode… it is a must-watch. While it has all the familiarity of other Marvel Cinematic Universe properties, the series thus far wholly stands on its own. Each frame bursts with color, one of the many elements showcasing the series’ originality. With the quirky characters, humanizing conversations, and wacky cinematography, the new Ms. Marvel series is a fresh take on a familiar story that is much needed in the MCU.

Much like her comic book counterpart, Kamala Khan is the first Muslim and Pakastani-American titular protagonist to be introduced in the MCU. This aligns with Marvel's efforts to include equal representation by introducing characters like Shang Chi, America Chavez, and Maya Lopez. There are more plans to introduce diverse characters in upcoming projects, such as Jennifer Walters and Riri Williams.

After having six episodes on her Disney+ series, there will be a lot in store for the character. It is already confirmed that she will take part in "The Marvels," a sequel to the "Captain Marvel" movie from 2019, which is slated to come out on July 28, 2023. There are also already talks of a possible Season 2 of the show. However, by speculation, she could also be a future Avenger or possibly team up with other young heroes introduced for a potential "Young Avengers" project.

Overall, Ms. Marvel is a fun, groundbreaking show with much potential from the recently released pilot. It seems an important installment for the MCU going forward and a stand-alone story. It is apparent that a lot of care and passion went into this show by the cast and crew, and fans are looking forward to getting to know Kamala Khan even more.