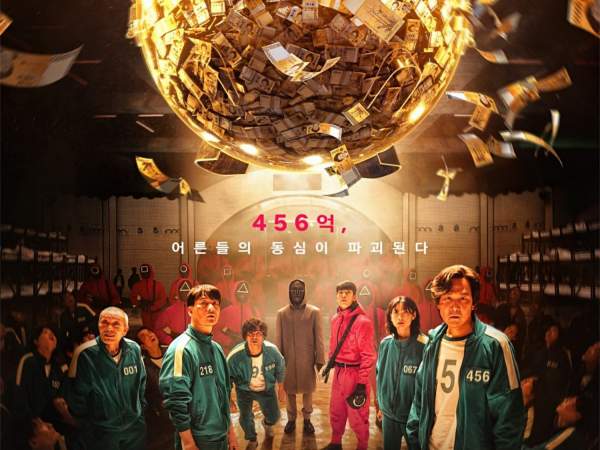 Squid Games is the talk of the town. Despite its strange title, Netflix's Korean TV programme is on track to become its most popular show ever after being the most popular foreign content in just a week of its release. Because it had no substantial marketing or advertising, this is very impressive. And then there was a social media frenzy. Hundreds of memes and dozens of TikTok challenges were born as a result of the broadcast.

So, what's the appeal of Squid Game?

A gang of destitute people are pitted against each other in violent children's games by a massive cash reward in Netflix's dystopian fiction Squid Games. Seong Gi-hun, a gambling addict who takes from his diabetic mother and is unable to provide for his daughter, is the primary character. The games appear to be a potential final alternative until Gi-hun and the other 455 players understand that being eliminated from the games equals death.

Unlike other 'humiliating game shows,' Squid Games’ has a social message wrapped around it. It is based on the genre popular in Korea and Japan; the social message is clear: income imbalance and privilege exist. A kind of Hunger Games meets Battle Royale that constantly pits humanity against survival, brilliantly targets Gen Z's nihilist humor and portrays the current societal anguish, it's also frightening and violent. Participants in Squid Game compete out of sheer desperation. Despite having the choice to exit the game at the start of the show, everyone returns because they realise that living in poverty with no way out is worse than taking a chance on death for a life-changing prize. When viewed from this angle, the gore and savagery are practically incidental – but some viewers may be drawn in by the bloodlust.

It's about a covert game played by more than 400 indebted people who, without giving anything away, are desperate for money. The 45.6-million-dollar prize money will be awarded to only one of the contestants. The remaining members of the group will perish. All of the rounds of the game are variations on Korean (and worldwide) children's games, such as tug of war.

When it comes to popularity, why is it so surprising? In any case, it's superbly crafted and stunning to look at. Invented cliffhangers and surprising revelations punctuate every episode's conclusion. In addition, the cast is first-rate, as well. However, this can be said for a large number of other shows as well. Squid Game has become a worldwide phenomenon for a reason. The only reason is psychological in nature. Our competitive capitalist society is the obvious target of the show's premise. The destitute physically fight for their needs is in a never-ending game of cat and mouse. And it's all done to please the wealthy. This kind of contemplation on social unfairness in jungle capitalism definitely sells at a time when more and more people are concerned about social injustice and disillusioned with the hamster wheel of our performance-driven society.

To begin, we don't simply identify with and put ourselves in the shoes of our competitors. After a few episodes, it becomes clear that VIPs are paying to watch these games and wager money on the participants, exactly like they would at a horse race. Watching this show puts us in the same position as these VIPs who get a kick out of seeing who dies or survives each round.

Consequently, we have a dual perspective. We are aligned with competitors, who are constantly on the defensive, but we are also aligned with VIPs, who are passively watching. The show's most inventive move is switching back and forth between these two points of view, and it helps viewers care about the social message while still being engrossed in the tale.  Its enduring appeal can be explained psychologically. With Squid Game, the social commentary is more palatable for a global audience because of the game's two psychological twists.

What People Think About Horror Movies

We can cope with existential and genuine worry and terror, like we did with COVID-19, with the support of horror and post-apocalyptic films. As a result of the ability to explore potential consequences at a safe psychological distance, horror lovers may have been more prepared emotionally for the epidemic, according to some research.

Horror is the only fiction genre especially designed to continuously and intentionally generate terror across a narrative. Fiction can provide a variety of learning experiences. Screaming, shivering, and having your hair stand on end are all common reactions to horror films. Psychologically, they elicit a wide range of feelings, including elation, anticipation, anxiety, dread, empathy, and disgust. The feeling of relief and closure that comes with a resolution releases neurochemical reward. This ride on the emotional whirlwind is at the heart of its allure.

It mimics that terrible emotion, and it does so in ever more inventive ways each Squid Game. The show asks: What is a playground if not a microcosm of capitalism's competitive corporate world?

We are forced to reflect on our own reactions to comparable distressing events as Squid Game develops because the moral difficulties the characters encounter become increasingly intractable. "Overestimation of moral choice" and "underestimation of group dynamics and compliance," according to Kambam, are common in social psychology. The idea that we would side with the bully or act just for our own benefit is repulsive to none of us. That is "both dangerous and exciting on an unconscious level" for people who watch shows like Squid Game, which puts us in a position of doubt. Squid Games has a knack for taking players on an emotional roller coaster. Using children's activities to build mini-mystery arcs within the bigger plot capitalizes on the cognitive dissonance. Violent acts committed against children heighten our horror and help us feel helpless, all while keeping our interest piqued.

Horror, according to Freud, appeals to us because it allows us to express feelings that our egos have repressed. Another line of thinking holds that the appeal of horror rests in its ability to tap into the collective unconscious. These films, according to Threat Management theory, serve to help people conquer their phobias by making them appear undefeated.

It's not hard to figure out what people think of Squid Game. It's fast-paced, suspenseful, and caters to the bloodlust of the audience. However, it's also filled with social commentary and messages about human psychology, so it'll have an impact on viewers for a long time.

Anxiety And Depression in Women