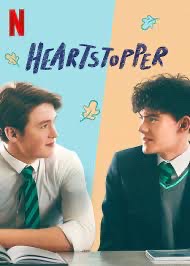 ‘Heartstopper,’ the new Netflix show sweeping our social media feeds and screens, has also marked the hearts of young audiences. Based on the comic by Alice Oseman, the show was released in April 2022 and impressed audiences with its realistic depiction of British school life and the experience of being a part of the LGBTQ community in such an environment. The show follows the story of fourteen-year-old Charlie Spring (Joe Locke) and Nick Nelson (Kit Connor), the school’s rugby captain, who begins questioning his feelings towards Charlie as their friendship progresses.

The show has been praised for its perfect casting, but the soundtrack of ‘Heartstopper’ is one reason the show had such a visceral effect on its audience. With over half the artists being queer and members of the LGBTQ community, the show creators ensured representation permeated every part of the show’s curation. Ranging from established artists such as Mxmtoon and Rina Sawayama to rising stars such as Baby Queen and Smoothboi Ezra. The soundtrack incorporated genres such as folk, electro-pop, Indie, and bedroom pop, all blending to create highly touching and relatable scenes. In addition, the selection of music makes ‘Heartstopper’ all the more personal to viewers with how perfectly the tracks complement the scenes to which they were added.

Heartstopper distinguishes itself as a teen show, whereas series such as Skins and Euphoria have been criticized for their over-sexualized depiction of teenagers. Heartstopper does the opposite. Young love in Heartstopper is eager. It is earnest, awkward, and at times even sentimental. Sex is a topic that should be touched upon in later seasons, but it is not the main focus of Nick and Charlie’s relationship, a refreshing change for teen shows. The show has been renewed for two more seasons, much to the joy of its ever-growing fanbase. Still, if remaining true to the comics as the first season did, these latter seasons will touch on more serious themes such as eating disorders and mental health issues. Still, Heartstopper is not tragic in its discussion of darker topics; it shows us that there is a way out, and there will be people who will understand you and help you.

As a bisexual woman raised in a culture that was not always accepting of non-heteronormative identities, I wondered what a younger me would have given to have a show such as Heartstopper, to look up to. Yet, at the same time, I feel a sense of relief and joy when thinking of the young audience who watch this show today and find comfort in being themselves. Heartstopper shows its audiences both the good and ugly of the lived queer experience, but in the end, its impact lies in how it gives young queer people hope. Hope that they too, will find love and lead joyous lives that will not be tainted by bigotry but with understanding.