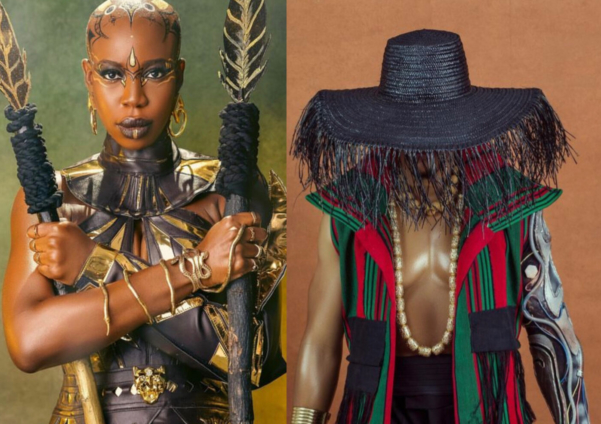 This study explores the Black Panther: Wakanda Forever movie premiere in Lagos, Nigeria. It describes the attire of those who walked the red carpet and portrayed the event's theme most effectively.

The highly anticipated debut of Black Panther: Wakanda Forever is a sequel to the 2018 film Black Panther, which stars the late Chadwick Boseman. Wakanda Forever kicks off its African talent tour. The sequel's cast came to Lagos on 13 November, following the release of Wakanda Forever in theaters across the continent on Friday, 11 November 2022. On the red carpet for the event are Letitia Wright, Lupita Nyong'o, Danai Gurira, Tenoch Huerta Mejia, Winston Duke, and Ryan Coogler, the film's director.

`As Black Panther is a film that reflects African culture, Nigerians chose to design a theme with the same notion, which was portrayed in an Afro-Futuristic style. On the red carpet in Nigeria, there were numerous awe-inspiring clothes and cosmetics wonders to behold that were breathtaking and complete pieces of art. Bright hues, grandiose silhouettes, and luxurious fabrics comprised the participants' remarkable sartorial selections, which accurately reflected the theme. Adunni Ade, a Nigerian actress, was the runner-up for best dressed as she portrayed the theme of an Egyptian goddess. Her choice of attire, coupled with her fair skin, highlighted her ethereal beauty. She donned a corset dress fashioned from Ankara materials that emphasized her curves and a blue Nefertiti crown headgear with embroidered motifs—styled with gold jewelry to represent the Egyptian aesthetic. Anjy Luminee Couture, who conveyed the theme and embodied African culture, was the mastermind behind the outfit's creative brilliance.

Allysyn Audu, a former housemate of Big Brother Naija, appeared on the red carpet wearing a costume resembling that of the film's character, Okoye, complete with gold and black hues and an artful makeup application. Positioned in the photo with the Wakanda insignia, her hands were adorned with gold jewelry as she held two black staffs with leaves attached to them, resembling an African woman prepared for combat. Her leather dress, split on both sides at the knee and embroidered with a gold motif to represent opulence, gave off a macho impression. However, a sense of femininity permeated the appearance due to the creative use of yellow and black makeup. The outfit was designed by Tiannah's Place Empire, who embodied the idea by maintaining a traditional appearance to symbolize the culture. Her look was one of the best dresses of the event.

Denola Grey, a Nigerian actor, wore a traditional Yoruba outfit known as Agbada with Shokoto and Buba to maintain a traditional appearance. In keeping with vivid colors, the color was metallic, and he paired it with white boots to tone it down. He wore minimal makeup consisting of a daring eyeliner look and a burst of color on the eyelids to add a feminine touch. Incorporating the culture into his appearance, he wore African jewelry fashioned from cowrie and a mask of an African deity, symbolizing the mysticism of African culture. The suit was created by TDA Couture, an African brand of men's apparel. At the same time, the mask was manufactured by Iamisigo, who specializes in Nomadic Conscious Wearable Art that is traditionally crafted in Africa. He adhered to the event's concept and was among the best-dressed men.

Prince Nelson Enwerem, a Nigerian model, walked the red carpet to represent his African heritage. Dressed as M'baku from the film Wakanda Forever, he dressed up to represent and make a statement. To complete the ensemble, he wore a brown armor skirt, a leather blouse with cowrie jewelry, and an embroidered leather handbag. His appearance represents an African warrior prepared for warfare. With a brown wool jacket and three white lines like scratches painted on his face while clutching a stick in his hand, his appearance is intimidating and indicative of a man of authority.

In conclusion, the film Black Panther: Wakanda Forever premiere included African-inspired attire. As Nigeria is known for its fashion and originality, it is unsurprising that the individuals who walked the red carpet infused their culture most effectively. Celebrities in Nigeria demonstrated their support for the film by donning attire representative of the African culture depicted in the movie. Some fashion styles were simple yet elegant while still including the Afro-futuristic theme. In contrast, others went over the top and offered extravagant outfits that drew attention but retained the theme and embodied the cultural appearance. The event was a resounding success and a night that no one will ever forget, especially with looks that will be popular in the media for some time.

What to expect at the 66th London Film Festival