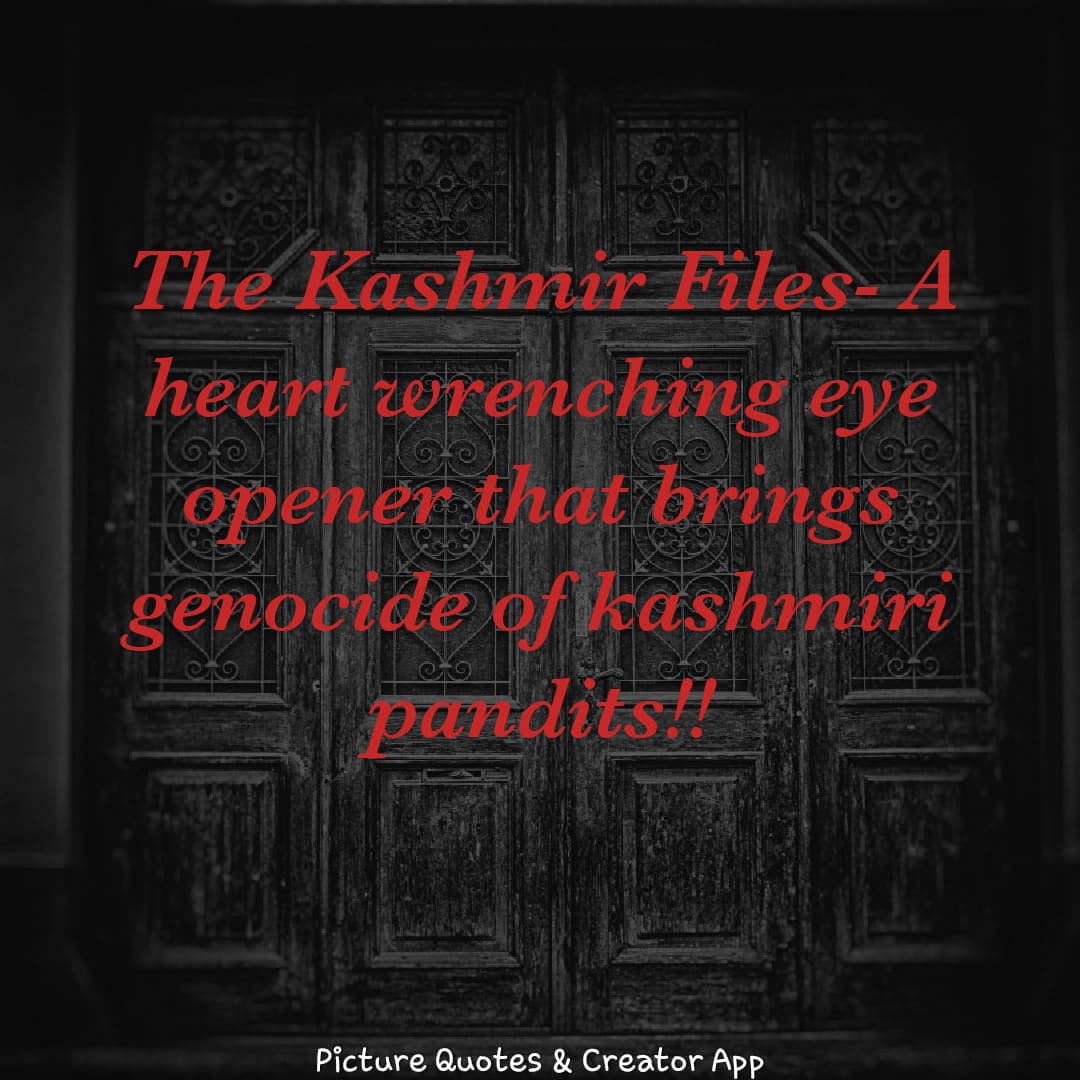 This is the real-life of Kashmiri Pandits from the past several years. Vivek Agnihotri has emerged to be the bravest and boldest person who has taken video testimonials of hundreds and thousands of first-generation Kashmiri Pandits and he quotes, “The stories left him numb, shattered”. He and his wife were emotionally drained listening to the sad, heart-wrenching stories of the victims who lost their loved ones witnessed them getting brutally murdered in front of their eyes.

India is a country that has been praised and glorified for its cultural diversity. We claim to be a secular nation, where everyone is allowed to practice the religion of their choice. It is a nation that has strived to carry forward thousands of traditions and is surviving because of its rich diversity. Without diversity, we can’t thrive. Diversity is what brings us together. Whereas in Kashmir, the environment has become monogamous singular religion preaching and practicing, making Kashmir lose all its diversity.

The Kashmir Files is a story that strives to speak the wounds in their raw form. The pain, heart-wrenching bloodshed, brutal genocide will make your heart go numb and leave you teary-eyed. Have you ever seen a theatre leaving the crowd inconsolable? Well, that’s what has happened after seeing the premiere. Every person including the people who weren’t victims of the atrocities left the movie theatre crying loud. Love and appreciation were pouring from all over social media for bringing out this heartless, brutal cruelty to the limelight because deep inside everyone feels guilty to have allowed this to happen. Tears, cries, rapes, assaults, murders, and merciless slaughters of Kashmiri Pandits showcase the end of humanity.

Vivek Ranjan Agnihotri’s Kashmir Files is all set to hit the theatres on 11th March 2022. The movie undoubtedly is based on the true incidents witnessed by Kashmiri Pandits. Grab tissues to watch this movie because it’s going to pierce right into your heart. The atrocities which were hidden by politicians, media are finally coming into the limelight after 32 years.

While the movie has received criticism from NDTV, which stated it as a “propaganda film” without even watching it, a trending tweet was re-tweeted saying "NDTV calls #KashmirFiles propaganda film”. The logic is simple. When Hindus are victims, the story must be buried and never told. Logic- Why do you want to disturb communal peace? But when Muslims are victims, the whole world must know. Logic- We are a weak, scared poor minority in India.

The movie has caught organic reach and received lots of appraisals without having to pour crores of rupees into “hype-marketing”. The movie has attracted the eyes of US and UK Congressmen. The film received pouring appreciation and applauses for a different approach and people appreciated the courage of the director who took such a life-threatening decision to expose the truth.

After watching the movie premiere, a fan Markarand Paranjape quotes, “A hard-hitting and heart-rending movie. What a brave film! Only someone with real guts and grit could have dared to tell this story which the whole world needs to see and hear”.

While some of the criticizers have come out saying it hurts the religious sentiments of Muslims and several PILs have been filed to stop the release of the movie. The movie has brought out the Islamic terrorism prevalent and the makers have sworn that they will go beyond any limit to bring out justice to the survivors and victims. Films have the power to reach out to huge masses and create a revolution. After this movie, even Pakistanis have shed tears. This is a historical movement in the Indian Film industry as it is a powerful voice trying to bring out the cries and nightmares of thousands of survivors of war. Humanity is the greatest religion of all races and let’s try to not end it.

Humanity Murdered!!! Chinese journalist Jailed and battling death for her sheer courage and inquisitiveness to bring out the truth during the initial stages of the Covid Pandemic in Wuhan