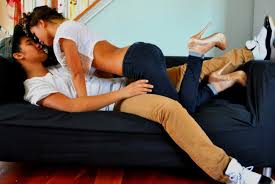 Sex, sex, sex. It's everywhere, and it happens every day. Indeed, casual sex is easily indulged in by most people, it isn't for everyone. However, this topic titillates the young generations more than it did in the 70s, where they expressed clear disdain for anyone who got fascinated or indulges in the act. They don't hesitate to share their opinion on how much they disagree with it. Some older generation can't fathom what's so casual about casual sex. Sex boosts endorphins and feel-good hormones. It's a serious game to play with.

A new study from Binghamton University faculty and researchers at Indiana University's Kinsey Institute found that casual sex can also be a source of intimacy, rather than just a physical endeavour.

Researchers from the university gave hundreds of college students an online questionnaire about their sexual habits, namely the intimacy and affectionate behaviours they showed during sex.

Although the researchers found, unsurprisingly, that there was far more intimacy and affection in relationship sex than casual sex, the frequency of affection and intimacy during casual sex was surprising — and much higher than the study authors predicted. The intimate acts included cuddling, spending the night, eye gazing, and engaging in foreplay — which many people might assume is a requirement, rather than a sign of affection.

But, hey, each to their own. The researchers found that women tended to be more intimate or affectionate overall, although there was no gender difference when it came to levels of foreplay or eye contact.

The way older generations view sex is different from the way we view sex. There was no hookup culture in their days as it trends in the 21st century today. Everything about how we date, the way we run our love lives and have sex, appears not to appeal to them. They don't understand how we make hooking up, casual sex, part of our culture.

According to Mae West; " Sex is an emotion in motion." There's nothing casual about it. It involves a lot than just ejaculating. Our ideas about casual sex are driven by the media we consume and that's not an accurate portrayal of reality, Merriwether says.

Hookups, one night stand, casual sex,  whatever you choose to call it, is a topic we hear very often nowadays. Most, if not more than half of us will have sex or have probably had sex with someone we barely know or don’t expect to date in the future. We are most likely to do this at parties, clubs, the university, and private spaces.

Research shows that men often regret sexual opportunities they miss with fewer regards to if they have any affection for the person or not. Women, on the other hand, regret most of the casual sex they engage in by morning. Their regrets are narrowed down to shame, self-blame, low self-esteem, and pride.

Research also has shown that youths have various definitions of casual sex and hookups; some people find it perfectly ok to explore casual sex. They find several benefits when they partake in it. Some say they get to discover a lot about themselves; what they like and don't like, what works and what doesn't. Many others say it's an opportunity to meet new people with different perspectives on sex and life and have fun.

Sex is inviting regardless of how casual you make it to be in your mind or how the portrays it to be.

Hookup apps like Grindr or Tinder have made casual sex appear more fun and easy by presenting several other ways to have sex without committing. These dating apps have a reputation for a reason.

Myriad of its users are looking for sex, and they don't grind words about it. Although some Christians say they found quality people, but it's like finding a polished diamond in the rough. According to singleroots.com -Tinder has a reputation as a hookup app for a reason. If sexual sin is an area where you struggled and for many of us that is, then don’t open the door for your pursuit of holiness to be derailed by it."

A 2009 study published in Perspectives on Sexual and Reproductive Health looked at sexually active young adults (mean age 20.5). Approximately 20% said that their most recent sexual encounter was casual. More men (29%) than women (14%) reported this.

Ultimately, the research team found no significant differences in the psychological wellbeing of those who engaged in casual sex versus those who engaged in sex with a more serious partner, regardless of gender. They concluded young adults who engage in casual sexual encounters do not appear to be at greater risk for harmful psychological outcomes than sexually active young adults in more committed relationships."

So, what do I do when I want sex but don't want to get emotionally involved?

You may ask. Change your thoughts and get productively busy. If you don't want to get emotionally involved with someone yet, then sex shouldn't be a priority for you now. If you do, chances are you would get depressed, fake orgasm, blame yourself, and possibly hate the guy. Making sex more complicated than you already are.

The fact is, no matter how we look at or trending it is to hookup every once in a while, with sex comes some sort of responsibility and commitment. There are emotional and physical risks involved in indulging in casual sex.

Sex has the strength to enhance people, so it is nearly difficult to have sex that does not involve giving of the whole self. You will lose an inestimable part of yourself when having intimacy with anyone. No matter how many timeouts tell yourself; "no strings attached."

If engaging in casual sex isn't against your belief system, morals, personality, values, or commitments you have to yourself or others, then you probably have got nothing to worry about.

Oppositely, if you are by nature or upbringing socially or sexually conservative, or you have a strict religious belief system, or perhaps, you tend to attach some emotions to anyone you are physically intimate with even though the person will not reciprocate the feelings, then casual sex isn't for you.

If you're a Christian, you need to learn to resist the urge, or pressure to visit any hookup apps, for the sake of your faith and the faith of those around you. Quit trying to fit into where you do not belong.