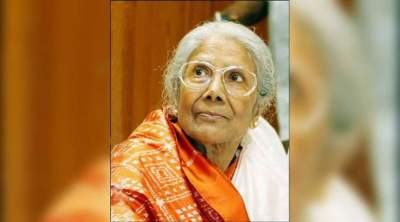 Gitashree Sandhya Mukherjee, a veteran playback singer, breathed her last this Tuesday, at a private hospital in Kolkata.

She was hospitalized since January 27th and was suffering from lung and heart complications after contracting COVID-19 infection. Hospital sources have informed that her condition deteriorated early that day and her blood pressure had fallen. She was shifted to the Intensive Care Unit but suffered a massive cardiac arrest. Extensive efforts to revive her failed. The veteran left for her heavenly abode at the age of 90.

Prime Minister Narendra Modi expressed his grief and condolences to the bereaving family. “The passing away of Gitashree Sandhya Mukhopadhyay Ji leaves us all extremely saddened. Our cultural world is a lot poorer. Her melodious renditions will continue to enthral the coming generations. My thoughts are with her family and admirers in this sad hour. Om Shanti”, he tweeted.

West Bengal Chief Minister Mamata Banerjee also extended her grief. She tweeted, “Deeply saddened that Geetashree Sandhya Mukhopadhyay, the queen of melody in Bengal, is no more. Her departure creates an eternal void in our world of music and in the hearts of millions of her followers here and in the diaspora”.

Singer Abhijeet Bhattacharya told a television channel, “Like Lata Mangeshkar, Sandhya Mukherjee was the incarnation of Saraswati. These voids can never be filled”.

Sandhya Mukherjee, an Indian playback singer, specialised in Bengali music. She was awarded the highest civilian honour of the Indian state of West Bengal, the Banga Bibhushan award in 2011.

She was named a Padma Sri recipient in the Republic Day awards, but she had turned the offer down.

She recorded her first song for the movie Anjaan Garh in 1948. A student of Ustad Bade Gulam Ali Khan, her illustrious career spans over 7 decades. During this, she has worked with and under various luminaries, including stalwarts like S.D. Burman, Roshan, Madan Mohan, Hemanta Kumar, and many others.

When the country is still mourning the demise of Bharat Ratna Shri Lata Mangeshkar, the demise of another veteran has deeply affected the music industry and Indians alike.