What happened to the Indian soap opera? 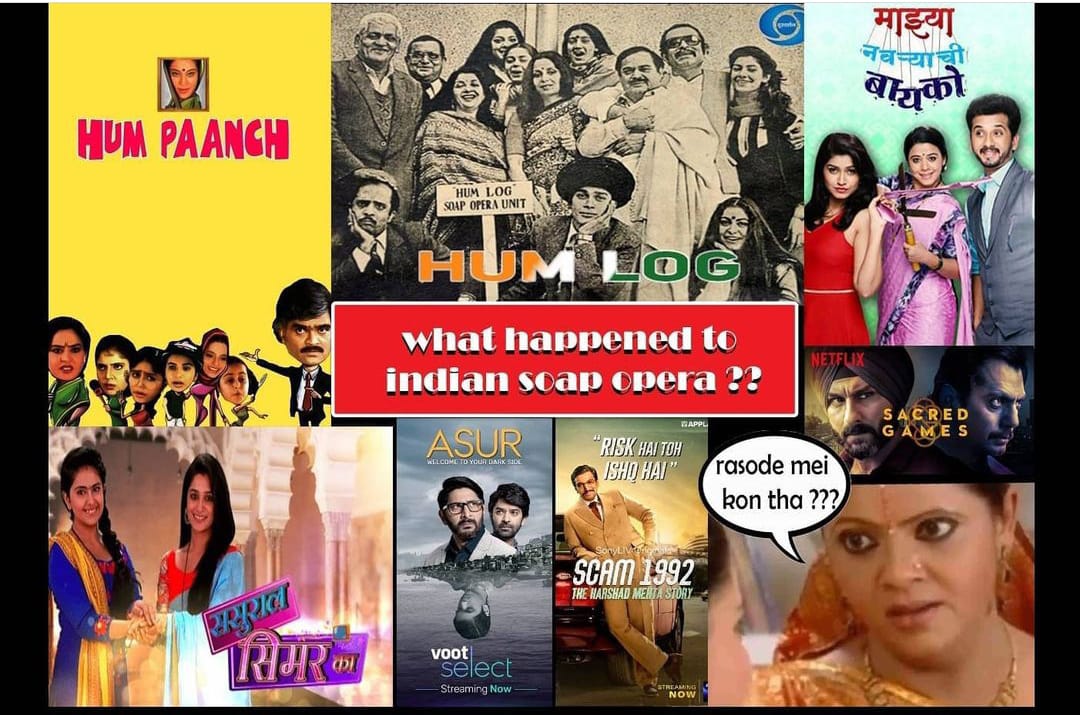 In India, soap operas played an important role in the life of an individual. These soap operas gave people the satire, humour, and entertainment that they needed. Indian soap industry had some promising shows like Hum Paanch, Hum log, and other fun shows like Sarabhai Vs Sarabhai. But then how did we end up with Sasural Simar ka and Majha Navryachi Bayko.

For that, we must look back to a time when the serials were promising and progressive with meaning attached to them. At that time channels did not have a lot of competition with each other, so they had time to make quality content. After the outburst of Bollywood in the 90s, every girl wanted a boyfriend like Rahul from Kuch Kuch Hota hota and a mother-in-law like Reema Lagoo from Hum Saath Saath Hai. This is where things started to go down for the television industry. The television industry was slowly growing and was becoming a big name at this time. Many TV producers tried to copy movies and make soap operas which went big because it gave people the experience that they got in theatres for three hours every day. But as producers got more and more money out of these serials, they started milking the serials. A serial scheduled for 100 episodes was extended to 1000. This pushed the writers to add unnecessary scenes which made the episodes long and boring. Side plots too were added that had nothing to do with stories.

One more thing that destroyed Indian soap operas was the sound effects. Some of the early creators of traditional Indian soap operas said that the serials should easily reach the homemaker who might be cooking in the kitchen. This gave rise to racist and sometimes sexist sound effects. Some examples are the "Balle Balle" for a Sikh person or "Aiyo" for a South Indian or some seductive sounds when a girl is shown on the screen.

Another thing that killed soap operas was the same story plots. The first serial that did well was Saas Bhi Kabhi Bahu Thi. Then the whole Indian soap opera producers and directors made shows only showing the same homemaker and her mother-in-law in the story. This plot was so overused that people started getting used to it and any serial with a new concept would be merged into the same concept. After a few episodes of a serial, it loses its main plot and becomes something altogether. For example, a serial on Zee Marathi called Agabai Sasubai was about a couple that gets married in their 50s and how they live their lives. But the serial's direction shifted from this to a negative plot with the lead’s son doing ill to his mother. This part should have been part of the story for a few episodes but it became the main plot of the story. This gave rise to a lack of good content on television and made the Indian Television braindead and intellectually dead.

People watch Friends and Big Bang Theory rather than Indian shows because shows like these have a unique plot in them and are not copied. They may have stereotypes, but they are original, so people turned towards them. The shows in India can be divided into three phases. First, the progressive era, second, the family era, and now it is turning towards the web era.

If you see the shows in the family era, you will find that all the negative roles are played by women. In India, most of the time, the villain role is portrayed by women. This has given rise to misconceptions about women.

Now, the question arises of how we can watch good soap operas in this country. The simple answer to that is you cannot imagine soap operas in the country would change when the old kind are so popular. But shows on Dr Babasaheb Ambedkar lend some hope in this regard as they are doing well. Shows on historic events do good on TV right now. The youth places their hop on Web content. After the cheap internet connection became easily available, web content flourished in India. Web content is not controlled or censored by anyone, so the producers and directors could explore diverse concepts. Shows like Asur, Sacred Games, Mirzapur, Scam:1992, are some of the well-produced Indian shows that have won the hearts of Indians.

According to a survey conducted by The Hindu, it was found that 89% of the web viewers belong to the age group of 18-35. This tells us that the youth of the country prefers web shows over traditional media options. But if we want to fix our tv serials, it is we who must take action as what we watch is what the producers produce. If we boycott shows that are racist and sexist the producers will change the plot of the story and we will get the wonderful content that we want. The remote does not change the sexist content on tv it is you who does that. So, pick up the remote and change the way you watch tv.

Why Netflix is superior than other web series platforms?