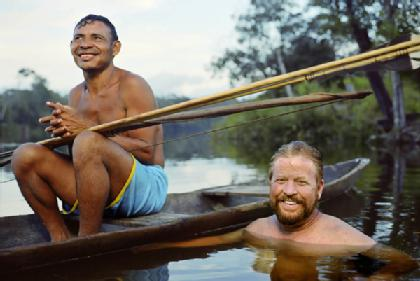 More than forty years ago, a missionary called Dan Everett attempted to convert the Pirahã, an elusive Amazonian tribe, to Christianity. By the time he had left, he had renounced his guild, conventional rules of grammar, and even God.

The Pirahã people are not numerous; there are only 700 or so left living in the Amazon. They are a hunter-gatherer society, operating in a typical way for an indigenous Amerindian tribe. They have a nuclear family system, but the village takes care of the children. The Pirahã live in many towns, each containing around 70 people, much like other tribes such as the Jiahui and the Tenharim. But tucked away in the heart of the Amazon lies an anomaly to language as we know it.

Everett suggests that the Pirahã culture severely constrains its grammar in several ways. The language and the culture are symbiotic in that there are no phrases and tenses outside the Pirahã culture. There is no need for past and future tenses, past anecdotes, or even complex sentences. As Everett attempted to convert them, they would ask, “have you seen Jesus? So why do you tell us about things that you have never seen?”. Myth is incomprehensible to the Pirahã. The language focuses on the present and ‘the immediacy of experience,’ placing it as unique. Captivated by the Pirahã’s joy, Everett dedicated the rest of his life to studying the language.

Brazil’s ‘Accelerated Growth Program’ casts the future of the language into doubt. To secure energy independence, the Madeira Dam was conceived in the mid-2000s to diversify Brazil’s energy demands. The construction of hydroelectric plants deep within the Amazon rainforest puts dozens of indigenous tribes at risk of displacement, disease exposure, and in extreme cases, extinction. While excess flooding will lead to a build-up of methane, increasing the risk of harming the biodiversity in the region, the impacts on tribes like the Pirahã will be keenly felt. According to Brazilian law, “indigenous people must be adequately consulted before implementing any project that could negatively affect them. The companies involved in the Madeira Complex have failed to do so.”

FUNAI, the National Indian Foundation, is the Brazilian government body responsible for mapping out and protecting lands traditionally inhabited and used by these communities. It has been critical of the Madeira Dam project. It has stated: “that the noise of the dam construction has already pushed some of these Indians off their land, into a territory where miners are operating illegally.” Due to the remote nature of tribes such as the Pirahã people, this could create conflict. The Pirahã lack natural resistance to disease, having spent so long isolated from modern society. Forced displacement of these people might disperse the population so that the Pirahã language is lost forever.

FUNAI has to meet the challenge and scrutinize the wings of the Brazilian government intent on conservational colonialism. Its money and funding have been gutted under Bolsonaro, and it is seen as an irrelevance and an organization anathema to ‘Brazil above Everything.’

Perhaps those in power will open their hearts– just like Everett. The clock is ticking.