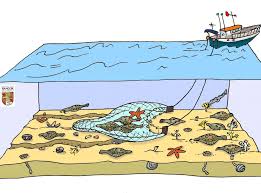 Alaskan snow crabs have disappeared, and climate change is to blame. In October 2022, Alaska shut down its snow crab fishing season for the first time. Ever since the 2018 heat wave in the Bering Sea, the snow crab population has plummeted. A National Oceanic and Atmospheric Administration (NOAA) survey indicated an 84% drop in the eastern Bering Sea snow crab population, from 11.7 to 1.9 billion. Climate change is undoubtedly the predominant factor in this drop, but it isn’t necessarily the most significant factor. Many Alaskan crab fishers and climate scientists have argued that bottom trawling has much to do with the outright significance of this four-year drop.

Trawling is the fishing practice of pulling a huge fishing net behind a collection of small boats or one large boat for which the practice gets its namesake, a factory trawler. According to Oceana, “Bottom trawling destroys far more ocean habitats than any other fishing practice on the west coast.” Trawling nets range from 40-60 feet wide and 8-10 feet tall and are used in either a midwater trawl or a bottom trawl. But much more commonly, a bottom trawl. This is unfortunate because bottom trawls are infinitely more damaging than midwater pelagic trawls. It is assumedly more effective than midwater or Pelagic trawling, though, because boats designated for deep-sea trawling often employ bottom trawling too.

In areas 20-60% of the sections of the Bering Sea where bottom trawling is specifically designated to be illegal, pelagic trawlers bottom trawl some 70% of their trawling time in search of Alaskan Pollock. This is all according to a report from the North Pacific Fishery Management Council (NPFMC) released in April of 2022. Specifically, the report said, “In other words, actual bottom contact would be estimated at a value between 20% and 60% of the raw area swept… … reflecting an assumption that pelagic gear is on the bottom at least 70% of the time” in section 4.1 on page 26.

It's unclear whether these pelagic trawlers were bottom trawlers that acquired an aquatic license to trawl in areas they wouldn’t otherwise have access to or whether the general practice of deep-sea trawling is in and of itself tied to bottom trawling. Either way, these sections were inaccessible to bottom trawling for a reason. These sections of the Eastern Bering Sea slope are home to deep-sea coral reef ecosystems which have lived and grown longer than the history of modern humanity. Bottom trawling can take apart this ancient ecosystem in one swift swoop of their heavy nets.

Coral reefs are often called the rainforests of the sea because, like the global rainforest ecosystems, they are distinctly tied to the health of the living and non-living species that inhabit and surround them. Likewise, the aquatic species that inhabit and surround the coral reefs are all pivotal to the survival of these reefs. According to a coral reef article on the NOAA website, “About 25% of the ocean's fish depend on healthy coral reefs. Fishes and other organisms shelter, find food, reproduce, and rear their young in the many nooks and crannies formed by corals.” snow crabs rely on the shallower reefs for shelter and hiding spots from predators. Likewise, snow crabs rely on the existence of deeper coral reefs to attract predators of theirs. They are not often directly connected to the health of the reefs, but they are undoubtedly affected by their increasing disappearance. Of which can be significantly attributed to bottom trawling.

In a study by Greenpeace and UC Santa Barbara, research biologist Robert Miller said, “They take a long time — tens to hundreds of years — to recover from being destroyed by bottom trawlers, particularly the big specimens, which can be old.” In other words, the efficient reef destruction that bottom trawling causes has somewhat irreversible effects. The snow crab problem will continue to get worse if bottom trawling continues with light regulation.

There’s not enough evidence to say that bottom trawling is the leading cause of the snow crab’s disappearance. There’s hardly any evidence to indicate any reason for this phenomenon. But the motivation behind the bottom trawling practice is precisely the cause of the worst instances of climate crime. This is to say, careless treatment of the environment and defiance of environmental regulations to turn a quick profit. Alaskan fishermen and climate scientists recognize the profitable nature of bottom trawling for Mackerel, then chumming them and whatever other meat they get for grocery sale. Snow crabs are more likely to disappear from the Bering sea because of their warming temperatures. Still, the Bering sea has significant warming temperatures because of practices like bottom trawling.