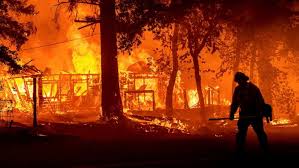 Climate concerns are honest. The time that is coming will be hard to tackle if we don’t start thinking about climate change right now. There is a grave need to study the climate. We all need to be more empathetic for the changing climate.

Catastrophe has become a real thing. The melting glaciers are warning signs that the coming future isn’t good. Global warming in coming times will make our life more difficult if not taken seriously.

Climate has been taken for granted for a long period. The things taught in our school regarding pollution have been left on that same page. Those pages are needed to turn again.

Major catastrophic events all around the world proved how we are turning toward climate change. Let’s observe a few of them.

This region is cool and pleasant but now it is in the blanket of extreme temperature. The spread of wildfires has slowed in recent days but it is being said a new wave will hit soon.

The region of northern California is seeing the Dixie fire. This is a large wildfire that has covered 218,000 acres.

People in this region are asked to be evacuated.

Western Canada and the US are witnessing a historic heatwave. This heatwave is breaking every temperature record.

Scientists are saying that there are possibilities that because of human-induced climate changes we are witnessing this.

The historic rain in Europe took away the lives of dozens of people. The Weather Service Spokesperson has said that in some parts, rain received is much more than in the past 100 years.

Photos coming from Germany and Berlin are devastating how buildings have turned to debris. The cars were wedged in between.

This rain created heavy havoc in the western part of Europe.

People are still thriving from the effect of the torrential rain. This rain caught them when they were least prepared.

The situation was grave where floods accompanied high rains. People are losing their houses and more than this their lives.

Weather experts said that this could turn out to be more dangerous. The meteorologists suggested this but it wasn’t well communicated to the citizens. Lack of preparedness and climate change is being linked to the heave havoc.

In China’s Henan province there is news that more than 25 people lost their lives in the rain deluge. More than lakh people have been evacuated from the flood-prone province.

The area suffered due to derailing of transportation and connectivity in the heavy rainfall. Central city Zhengzhou was affected where cars were driven into the water.

Climate change is making a tremendous effect on people’s lives.

These were the world climate change effects. Our very own country is suffering from the same.

In February the country witnessed the major ferocious incident of melting glaciers in the Himalayas. This created a flash flood that swept a large population of the area. 60 bodies were found and many are still missing.

Meteorologists believe that this melting of glaciers is the return of climate change. This very instance proves that the coming road is a tale of horrific stories and deaths.

In the Northern Indian ocean cyclones are not a major thing but the problem is that they are getting more frequent. Scientists say that due to global warming the cyclone frequency is increasing and causing more disasters.

Cyclones are getting stronger and frequent. India recently suffered from two cyclones “Yaas” and “Take”. In May Taukate claimed more than 150 deaths in western India. The main effect was seen in Mumbai where many people lost their lives.

Just a week later India was hit by another cyclone, “Yaas”. This killed more than 15 people and the evacuation of 1.5 million people took place.

These cyclones made people lose their houses and livelihood. Global warming is a real thing that is leading to climate change. The coming time will be a path of horrific disaster at least for now that can only be predicted.

Maharashtra is prone to monsoon floods. The recent monsoon flood is proof of how life is becoming difficult day by day. The major reason for this heavy rainfall is climate change that we tend to ignore.

Heavy rain in Telangana and landslides in western places along with it a few days back was a picture of fear.

Rain brings lightning too. Thus, death comes from the skies. Dozens of people have lost their lives in lightning in past years.

In one of the recent incidents, 16 people in Rajasthan’s Amer Fort lost their lives while taking a selfie. On average lightning strike kills 2000 people in a year.

It’s high time we need to take the climate ecosystem all seriously. To sustain on earth we need to preserve the earth. Climate change is showing us the trailer of disaster ahead. We need to be concerned about our climate.