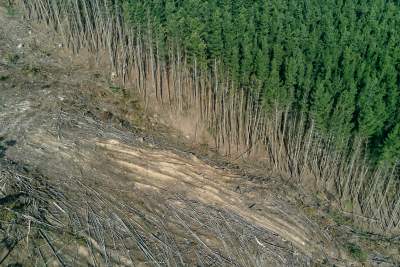 Deforestation is the process of long-term or permanent removal of trees from the area that will be utilized for other purposes such as palm oil plantations, soybean farming, and manufacturing.

Over 30% of the Earth’s land is covered in forests according to NASA’s Earth Observatory. Forests can be compared to effective storage units because they store over 45% of emitted carbon with their leaves, branches, trunks contributing to the process of gas collection. Forests are one of the biggest producers of oxygen along with being food producers, land preservers, and job providers.

Forests are a crucial, natural resource that has been consistently removed by humans. The online platform Tree Foundation stated that more than half of coastal temperate rainforests have been destroyed in North America. These forests used to stretch from California to Alaska.

The most frequent deforestation today is happening in the tropics. The primary reason for this occurrence is people building roads through these dense woods. The Rainforest Concern platform has stated that more than half of the world’s rainforests have been cleared in a century. In 2017 alone, more than 15.8 million hectares (39.0 million acres) of tropics have been lost due to deforestation. The concerning number is larger than the territory of Niger.

The frequent occurrence of deforestation is caused because of constant push for upscaled beef production. According to the World Wildlife Fund, this conversion drives pollution more than double of the second, third, and fourth drivers combined which are soy, palm oil, and wood products. South America suffers exponentially from the loss of tropical forests and the deficit keeps growing. Soy lands in South America have grown from 42 million acres to 114 million acres.

Just in the United States, more than 11,000 human-caused fires have occurred in 2021. These fires are caused by careless camping trips, harvesting trees for agriculture, and burning the remaining wood to clear space for cattle. In September of 2020, more than 32,000 hotspots have been detected in the Brazilian Amazon which represents a 60% spike from the same month in 2019.

Palm oil is the most commonly produced vegetable oil, but its demand is the reason why many forests are diminished or completely removed. For the growth of trees that produce palm oil, it is imperative to clear the original wood. The global palm oil market is expected to reach a value of $57.2 billion by 2026 while the United States market alone is appraised at almost $12 billion according to Globe Newswire.

Tropical rainforests are home to more species than any other terrestrial habitat. Forests as a whole have more than ¾ of the world’s known animal and plant species. On average a square kilometer of forest can contain more than 1,000 species. When the destruction of these life hubs occurs, ecosystems are immediately impacted. Like other species, human civilizations depend on forests. Over 63% of people in Africa depend on wood fuel as the main source of energy. Ghana has seen a 60% increase in primary rainforest loss from 2017 to 2018 according to the World Economic Forum. The issue is that Ghana relies on timber as a valuable export item. The shrinking abundance of timber has caused the Ghanian government to rely on the import of timber from South America and even some neighboring countries. The timber forests in Ghana are also essential because they provide jobs for local communities along with food, clothing, and water supply.

Tropical trees are the Earth’s aqueducts because they move the water out of any ecosystem present on this planet. By moving the water, the trees turn water into moisture which causes the atmosphere to cool down. With the rapid expansion of deforestation, the temperature is slowly skyrocketing which affects the distribution of rainfall. This process leads to a dryer climate that is prone to producing droughts.

Forests lessen the expansion of greenhouse gasses that are caused by humans. With the acceleration of climate change, the preservation of trees will play a huge role in trapping abnormal amounts of carbon dioxide. 10% of climate mitigation will be needed to slow down the global warming onslaught to only 1.5 degrees Celsius according to the London School of Economics and Political Science.

If alternatives for deforestation could be implemented, it would minimize the necessity of cutting down wood. If the farmers would explore sustainable farming methods or dive deeper into new farming technology, it would downsize the urge to acquire more land that should be covered in trees.

The replantation of trees is vital for restoring ecosystems to their original state. Another alternative to this tactic would be to let the area recover on its own, but the issue is that it takes more time. Both solutions are helpful in this global battle of extinguishing deforestation because upon its completion, the soil will be stabilized which will lead to fewer floods, renewed water cycles, and restoration of wildlife to its original habitat.

Recycling and reusing are great cures in limiting the effects of deforestation. The intention should be to recycle plastic, paper, and wood, which not only saves the environment, but it has a significant impact on the economy because the government does not have to import raw materials.

Individuals can join tree planting programs that connect local communities, schools, and universities where the focus would be an advocate for planting more trees during national holidays or opening ceremonies where larger crowds could get exposure to this timely issue.

Plenty of solutions are available for every human to explore, but the most important thing to understand is the reason why this problem is being highlighted. If we as a species do not take care of our natural habitats, we are effectively destroying our homes which bring us peace, prosperity, and joy. Deforestation that is inflicted on the environment is very similar to smoking cigarettes. We do not see the harm that we are causing to ourselves, but the damage is slowly accumulating until we realize that our generator of fresh air is lost forever.