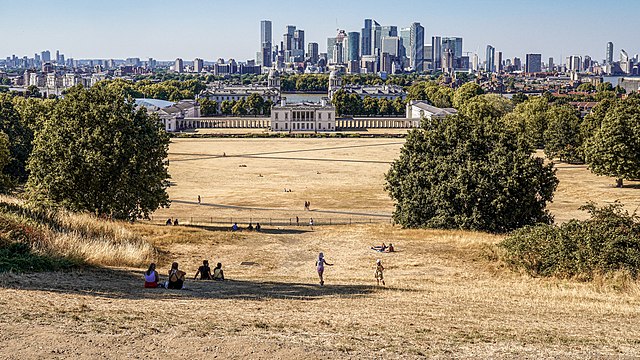 More extreme heat records, droughts, and wildfires have hit Europe this week as the continent and the world battle with climate breakdown.

In the UK last week, the Environment Agency declared a drought in eight of its 14 areas of England, allowing water companies to impose water-use restrictions on their customers. The country faced its driest July since 1935, this time coming after an unusually dry spring which left reservoir levels at a lower level than normal for this time of year. As a result, a hosepipe ban came into force in the southeast, with more expected to be announced across the country.

Electricity supplies are at risk, prompting calls on the government to deal with the country’s infrastructure, which is not built to operate at the extreme temperatures that Europe is seeing this year. Hydroelectric power output has dropped 20% compared to previous years, nuclear power plants rely on river water for cooling and are now facing restrictions on the volume they can use, and traditional fossil-fuel power stations, as well as solar panels, struggle to take up the load as they work less efficiently in high temperatures.

In France, the government has enacted a ‘crisis’ task force to deal with what it calls an “historic” drought that is hitting the whole country. Authorities have announced water restrictions in every part of the country, while the Meteo France weather agency warned that the high temperatures and dry days will continue with temperatures expected to exceed 40C.

In Spain and Italy, where a significant amount of electricity is generated from hydroelectric plants, electricity generated this way this year has fallen as much as 44% compared to 2021. A Rystad power analyst, Fabian Rønningen, told the BBC that although hydroelectricity can be ‘quite’ volatile, “40% is absolutely extreme.”

Transport across the continent is also affected, increasing the impact of Russia’s invasion and the cost of living crisis. Many of Europe’s most famous rivers, such as the Rhine and the Danube which have acted as vital freight links within the continent for centuries, are turning into trickles, leaving companies with no choice but to reduce loads and turn to more carbon-intensive transport such as lorries.

Captain Andre Kimpel, an experienced captain of a car ferry across the Rhine at the German town of Kaub, told the BBC, "It's no joke, we have 1.5m of water and our boat sits 1.20m deep. So we have 30 centimetres of water left beneath us."

Although he says it’s not unusual for water levels to drop, it’s getting much more frequent, adding, "We used to have a lot of floods. Now we have a lot of low waters."

What are the long-term impacts?

Professor Hannah Clarke, a Professor of Hydrology from the University of Reading, told the science media centre that many parts of England are “clearly facing drought conditions.”

“Water levels in several major river systems are very low. Some upper parts of rivers, including the Thames, have dried up almost completely.” Prof Clarke went on to discuss how to mitigate the impact of drought now and in the future: “The response to this requires everyone to help. I’ve stopped watering the garden, and we are having fewer baths and showers. But it is understandable why people feel less inclined to cut their water use when they see leaks seeping out of the ground.”

Prof Clarke continued, “Water companies ask consumers to use less. Consumers say, what’s the point when water companies aren’t fixing leaks fast enough. Regulators can impose fines and name and shame, but they can only do so much in a privatised system in which profits are guaranteed and costs ultimately come back to bill payers.”

“Ultimately, we need to spend more on improving our water infrastructure, but this will require major investment, and politicians won’t do anything that looks like it could increase people’s bills while other bills are soaring. We need to move past this impasse, or we will still all just be blaming each other as the car goes over the cliff. Unless the UK collectively gets its act together and builds greater resilience into its water system at every point, we face a more uncertain future in which the tap could run dry. There is a better future, where we use water better where it falls and don’t waste as much. But we need a fundamental shift in understanding from almost everyone to get there.”

Since announcing his resignation over a month ago, UK Prime Minister Boris Johnson has barely been seen in public at all. The government is not expected to announce any major new policies to help with either the drought or the cost of living crisis until the new Prime Minister is announced on the 5th of September.

The drought comes as the energy price cap, which has already risen to record levels this year, was announced to be expected to rise again. In October 2021, at the beginning of the European energy crisis, the average annual energy bill for the British household was £1400. This number has already risen to a record number of almost £2000 a year, but this is expected to more than double by the January 2023 rise, which is estimated to reach £4266 a year by January, forcing yet more families into fuel poverty in the coldest winter months. Experts have this week estimated that, by April 2023, the average energy bill will pass £6,000 per year.

A report by academics at York University concluded that by the new year, an unprecedented 58.5% of UK households will be plunged into fuel poverty by the price rises, and this rises to over 80% of households consisting of large families, lone parents, and pensioner couples, who are among the most vulnerable to cold temperatures. When families across the UK are already facing dire rises in the price of food, petrol, water, and now energy, this winter is set to be an unprecedented struggle for survival, even in median-income households.

This is the UK in 2022: record prices, record poverty, and families struggling to feed their children and heat their homes. Only the temperatures that they caused are more record-breaking than the profits company bosses boast of.

Simultaneously, the world faces droughts, floods, heatwaves, and food shortages unprecedented in nature and extreme in scope. Contingency plans for extreme weather involve using methods that only make that weather worse. The time for action on climate breakdown is passed, and yet governments fail time after time to summon the political willpower to act.

But society must adapt to the changing weather. Nature does not wait for adequate leadership.