Global Deal Struck: COP15 Agree To Protect 30% of the Planet 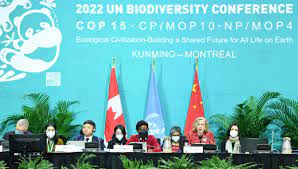 Montreal, Canada – Two years later than planned, due to delays caused by the COVID pandemic, WWF welcomes the adoption of the Kunming-Montreal Agreement, committing the world to halting and reversing biodiversity loss by 2030 – a global goal hailed as the equivalent to climate’s 1.5C.

Ministers and environmental groups have praised the ambition of the deal reached at Cop15, which includes a target to protect 30% of the planet for nature by the end of the decade and places emphasis on Indigenous rights.

The global ambition agreed at Cop15 to halt and reverse biodiversity loss by 2030 is vital if we are to bring our planet back from the brink,” said Mike Barrett, the executive director of science and conservation at WWF-UK. “The tripling of international finance for developing countries, conservation targets to halt species extinction, and the rights of Indigenous peoples being placed front and center are crucial cornerstones of the deal.”

Experts say the deal isn’t perfect, and warned that even more work remains to hold governments accountable in implementing it. But they called core parts of the text “historic,” including a critical target that federal Environment Minister Steven Guilbeault was tapped to stickhandle after talks almost fell apart last week.

That target commits nations to protecting 30 percent of the world’s lands, inland waters and oceans by 2030, and recognizes the central role that Indigenous leadership will play in achieving it.

"The last two weeks in Montreal placed nature at the forefront of global policy discussions. The agreement struck today among the participating 196 countries could mark a turning point in mending our broken relationship with nature. It includes a new funding mechanism for helping the developing world reach its goals, and it also commits parties to delivering against the 30 by 30 vision that puts Indigenous peoples and local communities at the center of that work,” said Carter Roberts, President and CEO of WWF-US. “Now the hard work begins. Ultimately this agreement will be judged on the strength of its implementation. It’s up to governments, businesses, and other actors to turn its goals into concrete outcomes, and to build on their ambition where needed. In the US, we take heart that – though our country is not a party to the underlying convention – the Biden Administration has already embraced many of the principles of the agreement. We at WWF-US look forward to working with the US government, companies, and other partners to make sure the US does its part toward achieving a natural positive future.”

There was high praise for the emphasis on the rights and territories of Indigenous people who, despite their outsized contribution to protecting nature, often face threats of violence and rights violations.