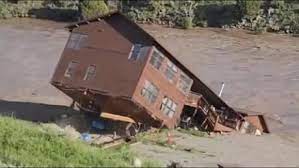 Yellowstone, Montana - The Yellowstone National Park is closed indefinitely to all visitors, after record-breaking floods caused historic damage to the park’s infrastructure and surrounding areas in southern Montana on Monday, June 13th.

Heavy rain and melting snowpack in the mountains caused rivers to rise to ‘unprecedented levels’, according to the National Weather Service. Flood warnings were also issued through Tuesday night.

Eric Larson, a scientist with the Natural Resources Conservation Service who studies snowpack, said that in January, February, and March, there were below-normal levels of precipitation in the Yellowstone park area.

April and May were significantly different than the previous months, as both were wet and cold. Larson said, “We accumulated snow at higher elevations and rainfall at lower elevations which is priming the soils so it wouldn’t absorb as much rain.”

Due to the colder weather, many higher elevation areas held snow into the second week of June, which combined with the heavy rainfall caused the flooding.

The town of Gardiner, which is just outside the park’s northern entrance, was cut off from road access for more than 24 hours after flood water washed out parts of U.S Highway 89. Road access reopened on Tuesday, and authorities instructed everyone to evacuate, as more flooding is anticipated over the weekend.

A large home in Gardiner was seen falling into the river, and at least one bridge crossing the Yellowstone River was washed away.

A little more than 50 miles downstream from Gardiner, in Livingston, Montana, the town’s hospital was evacuated, as flood waters reached the parking lot on Monday night. All residents living near the Yellowstone river followed mandatory evacuation orders, which were lifted Tuesday morning.

Unfortunately, the flooding came during peak tourist season, as June is one of the busiest months of the year for Yellowstone park and surrounding areas. According to the National Parks Service, on average more than 4 million visitors come to Yellowstone park annually. A majority of the tourists come in the Summer months, and typically up to a third of the visitors come in June.

More than likely, tourists will not be permitted into the park for some time, which will hinder local businesses in the area. Looking to bounce back from the Covid pandemic, this flood will likely cause the bankruptcy of many small family-owned businesses in and near the park.