How and why is the water of Yamuna turning frothy? 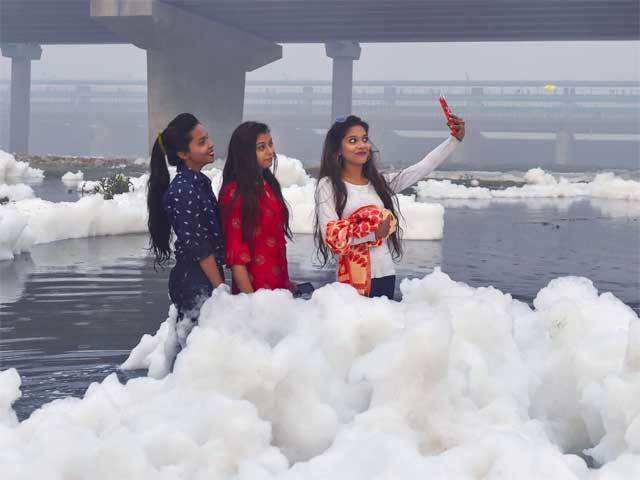 As devotees all over the country are celebrating Chhath puja, Chhath devotees at the Yamuna Ghat in Kalindi Kunj were seen standing in froth-covered water in the Yamuna River to offer prayers.

What has become repetitive incidents from the past few years is caused by the untreated sewage and wastewater from the factories and households which contains high levels of phosphate is released into the river. When asked by experts, they said that the froth is a direct indicator of pollution. When untreated and/or poorly treated effluents, including the sewage from those parts of the city which are not connected to the sewerage network along with industrial waste, can be the causes of frothing.

Not only these, but several other human activities such as deforestation, immersion of idols made with cheap lead and acrylic paints, polythene bags, and land degradation are also a few of the reasons that one of the holiest rivers in India is on its verge of decline.

Also known as Jamuna and Kalndi (named due to its water being dark)along its course, the river has its mention in the Vedic as well as Mughal history. It was the river Yamuna which Vasudeva crossed to carry Krishna to safety to Vrindavan and it's the same Yamuna alongside which the symbolic Taj Mahal has been built.

Formed from the Yamunotri glacier in Uttarakhand which has one of the purest waters, mainly due to the low human population in the area. Flowing through the plains of Haryana, Delhi, Mathura, Agra, and Prayagraj, the river supports agriculture in these areas.

But in return, it receives heaps of toxic garbage and pollution. The foaming is visible at this time of the year, the reason being that the water is at a comparatively lean phase, the temperature is low and the flow is less. Pollutants, don’t get diluted and thus the toxic foam. Even though only 2% of the river flows through Delhi, the city alone is responsible for 76% of the total pollution in the river. Though to be precise, the origin of the pollution is from the source itself. Uttarakhand is a regular pilgrimage site of Hindus and their kinds of stuff like used diyas, flowers, plastic bags, clothes, and other such pollutants are dumped in tonnes.

Talking about the pollution in the Delhi region, according to a senior Delhi Jal Board official (DJB), the frothing is only seen near Kalindi Kunj, downstream of the Okhla barrage. This doesn't mean that the water at the rest of the places is any less toxic. As per the latest test conducted by the Delhi Pollution Control Committee (DPCC), the level of dissolved oxygen (DO) is “nil” at seven of the nine ghats along the banks of Yamuna in Delhi. This indicates that no living aquatic organisms can survive in such conditions.

The government deployed 15 boats as a response measure to remove the toxic froth which the river harbors. Also, bamboo structures were installed and water was sprayed from tanks so as the air bubbles which were trapped could escape and the foam can vanish.

In June 2021, DPCC banned the sale, transportation, and storage of soaps and detergents which do not conform to the quality standards set by the Bureau of Indian Standards (BIS). Also, water samples are being collected near the Okhla barrage to check phosphate levels. Talks have been initiated to upgrade the technology of Sewage Treatment Plants (STPs).

On an individual level, we can try to raise campaigns and create awareness among the masses using social media. If possible, one can also fund privately owned and government projects and can try to popularize sustainable methods. Even a small initiative can help a lot.

Rubbish and All You Need to Know About It

What Is the Ecodesign Ready Scheme?