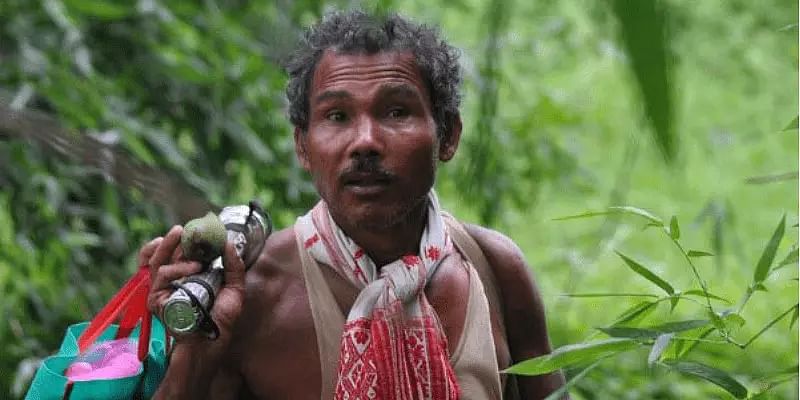 What does it take to turn a barren plain into a forest? Apart from plants, it requires someone to take control, work hard, and exhibit the resolve to continue planting and caring for trees in the face of adversity.  As the world stares at humanity in the face of climate change, people like Jadav Payeng, a local tribesman from Assam, have become a worldwide forestry hero by establishing a 1360-acre forest on Majuli island in Assam's Jorhat district. Payeng is a member of the ‘Missing tribe, who lived in the forests and raised cattle to sell milk. He is a resident of Kokilamukh in Jorhat, acquired an interest in plants when he went to school in Nobinang Boligaon village, where Dr Jadunath Baijpura, an agricultural scientist, liked teaching youngsters about plants via practical learning. Payeng and his tutor recognized he had a natural gift when he began planting saplings of various sorts, as saplings planted by him grew quicker, particularly paan saplings (betel).

Jadav Molai Payeng, 56, is a farmer from Assam's Jorhat who is also known as "The Forest Man of India." He is widely regarded as the creator of the world's biggest man-made forest on Majuli Island in Assam. Payeng returned to his birthplace in Aruna Sapori, a river island on the Brahmaputra, in the sweltering summer of 1978. In 1979, at the age of 20, he witnessed hundreds of snakes laying haplessly in Majuli reserve, the world's largest river island located in the Brahmaputra river. The serpents were washed away by a raging river. The snakes died as a result of large-scale erosion on the treeless, dry sandbar in June, as the temperature continued to rise.

“This sad incident made me worry that we may all face the same end in the future if nothing is done,” the old guy stated. Payeng approached the Deori tribe for a solution and they urged him to plant bamboos on the island, and the young Payeng called Molai began with 25 seedlings and never stopped. He worked in the family business and maintained his mission forest work in later years. After 30 years, deer, bunnies, birds, rhinos, tigers, and around 115 elephants visited Molai Kathoni as the green cover increased.

His activities were virtually unknown, even to the forest department, which eventually ventured into the Payeng-grown forest in 2008 when residents of hamlet Aruna Chapori reported that elephants had damaged their crops and residences. The police were taken aback by the thick and thriving forest. When tigers murdered nine cows in nearby villages at the same time, residents flocked to the region in huge numbers to cut down trees, blaming the forest for the problem.

Payeng, on the other hand, rose and stated that they must first kill him before cutting down trees. Payeng said in his basic Hindi that the people eventually bowed down and fled without causing any damage to the forest. When asked if elephants still bother the villagers, a cheerful Payeng said that he had cultivated enough bamboos (a grass type for wild animals) for them to eat.

In the year 2012, Jawaharlal Nehru University called him to its campus, and after three days of examining his wildlife expertise, he was awarded the title of ‘Forest Man of India.' Later, the late President of India APJ Abdul Kalam honoured him with a monetary reward of Rs 2.5 lakh and a citation. In 2015, he was given the Padma Shri, the country's fourth-highest civilian honour. He spends all of the cash prizes, as expected, on the additional forest. He has already hired four labourers to help him plant another 5,000 acres. The largest of them all, the forest expanded more than 1360 acres of the region has been called Molai Forest after him. Payeng, who has been called to give lectures all over the world, has now hired six people to carry on his initiative while his absence. “I use the money I get from prizes and other initiatives to support these associates,” said Payeng, who has been working on another forest on a neighbouring island since 2011, although the job is still incomplete due to the covid19 epidemic.

He intends for the forest to expand to about 2,000 hectares so that elephants and other wild creatures do not get too close to human settlements. Payeng, who grew up on government property, wants it to become a community reserve that also provides socioeconomic advantages and livelihood opportunities.

Payeng, a rich trove of practical knowledge, laments that plant studies do not begin in elementary school and claims that even research students who visit his forest are unable to recognize plants despite knowing their names theoretically. The senior forester used an example from the North-Eastern area, stating that the region receives rains from March to June, but the pattern has been unpredictable throughout the years.

Payeng stated that the life of humanity is dependent on the survival of plants, and that nations such as the United States have impeded nature the most, and that global plantation is necessary to combat climate change. The claim is that the population is continually expanding, but the available land remains constant, therefore we need to plant as much as possible to avoid soil erosion. He also blamed the current environmental disaster on lax bureaucracy, claiming that bureaucrats who stay in AC rooms and never leave develop useless rules.

He has been the subject of award-winning documentaries as well as a film starring South Indian actor Rana Daggubati in Tamil, Telugu, and Hindi titled Kaadan, Aranya, and Hathi Mera Sathi. His inspiring story is taught in ecological lessons in schools across the United States of America.

The forestry veteran has worked on plantation projects in various nations, including France, Switzerland, Bangladesh, Taiwan, and Arabic countries; he is presently working on a forestation project in Mexico with local students for the next 10 years, three months every year.

Payeng's forest is now home to five Royal Bengal tigers, over a hundred deer, wild boar, over a hundred vultures, various types of birds, including pelicans, three or four larger one-horned rhinoceroses, and, of course, the snakes who inspired this remarkable narrative. Payeng might have stayed under the shadow of his favourite trees if it hadn't been for Jitu Kalita, a local wildlife photographer, who wrote a story on him in a vernacular daily in 2010. Jitu is now Jadav's buddy and mentor.

Payeng views the world in green throughout his waking hours. He returns home on a bicycle-boat-bicycle at sunset for his 8 p.m. dinner. After a little after-dinner along to smooth out the creases of the day, it's time for bed. “Tomorrow is a new day, and it contains the seeds of many more kinds of wood”, he says.