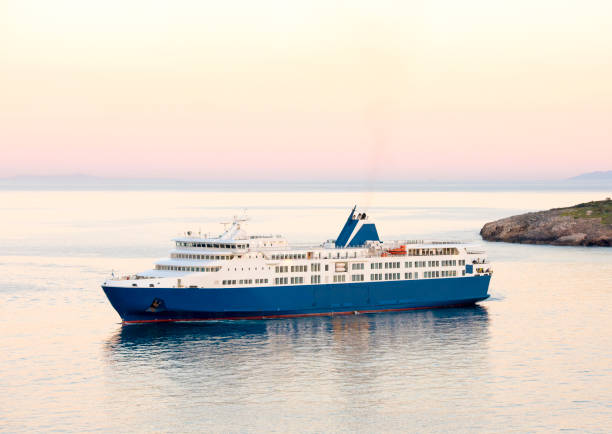 We all love the thrill of flying across an endless sea to lands of vacation but floating across can be just as enticing. Of course, when aware of the destination, the travel is but the utensil between the plate and your mouth.

Traveling from Scotland to Europe or vice versa restricts you to flights or using London’s Eurostar. An exciting new ferry route would not only open up options for those journeying between Scotland and Europe but it would be much better for the environment than taking a flight.

The city of Bruges has confirmed the beginnings of the new ferry route between Belgium and Scotland. It is expected to open in April 2023 and is said to take approximately 20 hours to travel between the two destinations. The route will link Zeebrugge, in West Flanders, and the port of Rosyth, a 40 minute drive away from Edinburgh. Initially it will be freight only but passenger transportation could soon follow as stated by the mayor of Bruges, Dirk De Fauw.

This new eco-friendly alternative to flying will benefit the environment in multiple ways.

By taking an airplane, you are more than tripling the harmful emissions. The benefits of a ferry ride in contrast in this environmentally-conscious century are great.

Although a plus point to travelling by plane is that it is far quicker, some could argue that this destroys the ambiguity of an adventure away from mundane routine and reality. We take holidays abroad for breaks, sightseeing, exploring, adventure and many more reasons. My advice is to say goodbye to ear-popping and anxiety upon take-off. Shake your head to limited legroom and bottled nausea and embrace the whole package. If you’re going on holiday, do it right by riding the rails across the North Sea. Roaming free across the ship where you can enjoy restaurants, shops and TV lounges.

Let the holiday begin the moment the folk lifts the food towards your mouth; not upon arrival.

This is an eco-friendly opportunity to see more of the world and the ways of the waves crashing towards the side of the vessel carrying you to bliss.

In recent years, ferry companies have introduced biofuels, a diesel fuel obtained agriculturally from plant oils. This makes it highly renewable and long lasting. It is stated that years of emission tests have led the Enivornmental Protection Agency(EPA) to confirm that biodiesel emits 11% less carbon monoxide than conventional diesel fuel. Thus, its increase in popularity amongst ferry operators and passengers.

The introduction of hybrid-ferries has contributed to the reduction of polluting to the environment. It combines electric batteries and conventional diesel power, which is proven to reduce CO2 emissions by roughly 15,000 tons each year.

Alternatively, there are various ways of cutting pollution besides organic fuel. Nowadays, many ferries are fitted with solar panels, engine filters, hull coatings, water treatment facilities and engine filters, all to lower maintenance costs as well as battle the greenhouse gas emissions.

Considering that this new ferry route will take approximately 20 hours, seems like a negative point, however, research referenced in Ferry Hopper states that slower vessels emit less exhaust gas compared to high-speed ones. It says “according to Oceana, even a 20% reduction in the ferry speed can lead up to a 50% reduction in air pollutants”.

This is further backed by a study referenced in Kayak, that the International Maritime Organisation (IMO) found. It says that “dropping a ship’s speed from 20-25 knots (37-46km/hr) to 16-19 knots (30-35km/hr) makes a remarkable difference in the volume of air pollutants emitted. The IMO also discovered that if the global fleet cut their speed by just 10%, ferry CO2 emissions would fall by approximately 23% in a single year.”

Ferry Hopper, conducted a case study to compare travelling from Greece to Italy by car, airplane and ferry. The results found that “travelling by ferry is much more environmentally friendly compared to travelling by airplane” and that “even though cars emit less C02 than ferries”, this excludes “factors such as other kinds of toxic emissions, prices, tolls and human fatigue” caused by travelling a long distance by car.

Ferry companies, Brittany Ferries and Balearia have been working to reduce their pollutants to the environment.

Britanny Ferries has invested in ships that comply with ‘Clean Sea’ standards and as a result have reduced C02 emissions by 10%. Balearia has added four vessels equipped with eco-friendly technologies and additionally on two of their ferries, they have new efficient engines resulting in a 36% emissions reduction on the Ibiza Formentera ferry route.

Next time you pause at your chaotic workspace, sipping cold coffee and deciding you’ve had enough and that now is the time for a holiday abroad, consider your travel method.

Remember, flying isn’t the only way. Consider that your journey may contribute to pollution or reduce it.

We all understand that in this climate, reducing our emissions is vital as air pollutants impact human health according to Queenslanders Government. “Poor air quality has harmful effects on human health, particularly the respiratory and cardiovascular systems. Pollutants can also damage plants and buildings, and smoke or haze can reduce visibility.”

Now, see how this new ferry route opening in April 2023 is a positive thing to prepare for. Especially if you're considering holidaying towards Europe from Scotland or Scotland to Europe.

Are you excited to try the new ferry route on your next vacation? We would love to hear your thoughts on this in comments below.