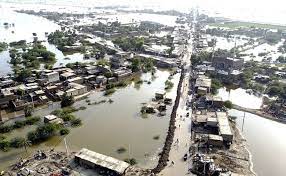 Pakistan is facing "a monsoon on steroids," the United Nations' Secretary General warns after floods submerge a third of the country.

UN Secretary General, Antonio Guterres, is urging nations to come to Pakistan's aid as he launches a $160 millions appeal to help the millions affected in the disaster. He blamed "the relentless impact of epochal levels of rain and flooding" as close to 1,136 people have been killed since June and foods and structures are being washed away.

This year's record monsoon is akin to the devastating floods of 2010, deadliest in Pakistan's history, which killed more than 2,000 people. In a video message, Mr Guterres called South Asia a hotpot of "climate crisis" where people were 15 times more likely to succumb from climate impacts.

"Let's stop sleepwalking towards the destruction of our planet by climate change. Today, it's Pakistan. Tomorrow, it could be your country." He said the United Nations appeal aimed at providing 5.2 million people with food, water, sanitation, education and health support.

On Monday, Pakistan's climate change minister Sherry Rehman described the situation as a "climate-induced humanitarian disaster of epic proportions". Pakistan produces less than 1% of global greenhouse gas emissions but ranks in the top 10 countries most vulnerable to climate change.

Many factors contribute to flooding, but a warming atmosphere caused by climate change makes extreme rainfall more likely. The world has already warmed by about 1.2C since the industrial era began and temperatures shall keep rising until governments around the world make steep cuts in emissions.

According to Pakistan's Planning Minister, estimates suggest that floods have caused at least $10bn of damage, and many people face serious food shortages. The country was already suffering from an economic crisis and now vast amounts of rich agricultural land have been ravaged in this year's monsoon, damaging food supplies and causing massive inflation.

The flood situation is most severe in provinces such as Sindh and Balochistan, but mountainous regions in Khyber Pakhtunkhwa have also been badly hit. Thousands have been ordered to evacuate the villages in northern Swat Valley, where bridges and roads have been swept away but even with the help of helicopters, authorities are still struggling to reach those trapped.

"Village after village has been wiped out. Millions of houses have been destroyed," Prime Minister Shehbaz Sharif stated on Sunday after surveying the area in a helicopter. Aid is starting to arrive after Pakistan launched its appeal for help. United Arab Emirates and Turkey have already delivered tents and medicines, while the US and Britain have pledged their support.

Earlier on Monday, the International Monetary Fund said it had approved a $1.2 billionn loan for the country.