Race To The Arctic 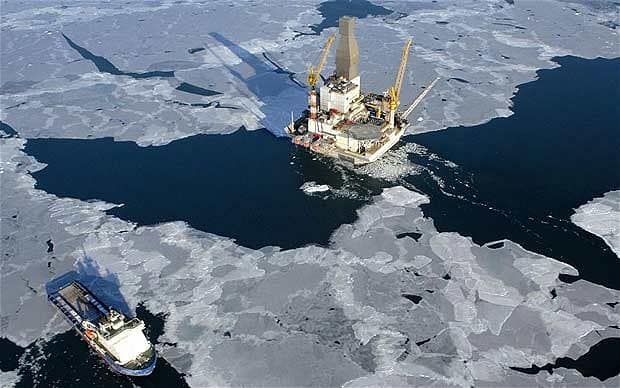 The Arctic is known for its vast ice formation, covering almost 15% of the world. A place of nature content for science and nature television showing its vast serene waters and the lives of polar bears. What you don’t expect to see is a red Chinese ice breaker making its way through ice or a high-altitude Russian bomber going over vast ice formations. Well, experts suggest, those sights will be getting more and more common as the ice shelves melt due to global warming, exposing new sea routes and petroleum resources.

And if history has taught us anything, then we know that if a certain geographical region has untapped natural resources then the count down has started for potential colonisation, where China and Russia are trying to take the lead.

Reports by the US Geological Survey suggest, that the Arctic may be home to 30% of the world's undiscovered petroleum resources, to put it in perspective, 30% means 160 billion barrels of crude petroleum, still untouched by humans. Now, who doesn’t want a piece of that? Now the Arctic region is an amalgamation of the North Sea and vast ice formation, hence it cannot be traditional colonisation, it's more territorial expansionist policies of different nations.

Now, what rights do the countries have in the Arctic? All countries have territorial rights in the arctic, they can also establish 370 km or 200 nautical miles Economic exclusion zones for fishing, building infrastructure and extracting natural resources - countries like Canada, Russia, Greenland, Norway, and Denmark already owns their share of territory in North sea.

So what’s the problem? The countries are in their rights to do what they want, right? In a perfect world, yes! But the war on Ukraine destabilised the Baltic region. Countries such as Norway, Finland, Sweden, Canada and the United States have started live munition exercises to acclimate for a potential war in the Arctic and in case of a potential attack from Russia.

Russia’s new intimacy with China is also posing a real threat to NATO and its allies along with many Asian countries. The Chinese military is using Russian ports for its military expeditions in the Arctic and trying to create an all-around military presence in the North Sea.

Tensions are expected to rise as the Chinese and the Russian government is trying to create and take control of a possible silk route for commercial trade between Europe and Asia by reducing time and cost by 35% according to Silk Road Briefing. But of course, it opens strategic paths for military expeditions as well, leaving the Baltic nations exposed in the North.

While melting of the polar ice caps and decrease in polar ice density is a clarion call for drastic measures must be taken to counter climate change for most climate scientists and activists. Ironically, for petroleum giants, it’s an opportunity to extract petroleum resources, since it's easier to drill in thinner ice, a strange world, right?

According to a report by The U.S. Army called Regaining Arctic Dominance, stated, 75% of Russian Oil and 95% of natural gas comes from the North. Russia already has “10 major working oil fields extracting 2.3 Billion metric tons of proven reserves, and 22 gas fields with 35.7-trillion cubic meters of gas”. Now, with the help of Chinese resources and military expertise, experts are fearing possible conflicts of interest in the Arctic.

In a race where no country wants to be the turtle, we just have to wait and watch as the future unfolds.