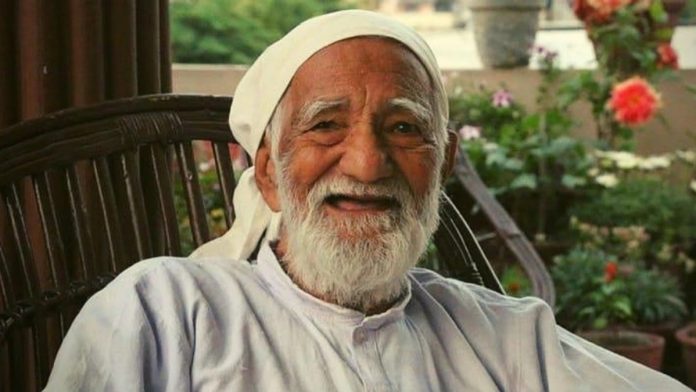 Millions globally are struggling with the unprecedented changes and challenges that the global pandemic has brought with it. Our so-called definition of ‘normalcy’, has been altered, and the simultaneous devastation has indeed disrupted our lives, wreaking unforgettable havoc. The rising mortality rate and a continuous surge in the covid-19 cases have left many people in the world, specifically India, in a state of trauma and loss.

The Press Trust Of India, on May 21, 2021 reported about the unfortunate demise of the prominent veteran environmentalist and the architect of the ‘Chipko Movement’- SundarLal Bahugana due to Covid-19. After reporting Covid-like symptoms and a fluctuation in oxygen levels. The 94-year old was admitted to the All India Institute of Medical Sciences on May 8, 2021, in his resident city. He took his last breaths at noon in the ICU ward of the hospital. Several distinguished leaders have expressed their condolences to him through Twitter and online posts.

Bahugan, the pioneer of the archival movement, ‘ Chipko Movement’, was born in 1927 in the Tehri Garhwal District of Uttarakhand. One of the very few people who carried within themselves a spirit of tenacity and courage, he joined the collective freedom struggle at the age of 13. Later, he was imprisoned by the authorities for his act of rebellion for independence at 17. After a brief stint in politics, he joined two other influential social activists, Mira Behn and Thakkar Bapa, in 1949 to embark on a journey to a better society. While most people recognize him only through his contribution to the Chipko Movement, very few are aware and have witnessed his insatiable desire to work for the upliftment of society.

His earliest acts of social service and consideration include; opening a school for the manual scavengers of his village and the surrounding areas oppressed by society and the village people. Throughout the time, he remained unfazed in his resolution to challenge and combat the evils of the caste system and the continuous atrocities it inflicted on many. Hugely inspired by the principles of Mahatma Gandhi, Sundarlal Bahugana became a ray of hope for many when he further established the Thappar Bapa Hostel in Tehri to assist the poverty-struck students of all communities.

Sundarlal bahugana was exposed and forced to witness the heart-wrenching reality of the consistent ecological degradation that happened during his padayatra in the Himalayan region with Vinoba Bhave in the early 1960s. Sundarial decided to dedicate his life to making efforts, not only to educate the villagers about the consequences of environmental degradation but a pillar of strength for them in strongly opposing the government’s reckless cutting of trees. He is a staunch believer in Gandhi’s morals and principles he preaches. He resorted to methods of nonviolent resistance to raising voice.

The irresistible enthusiasm displayed by him for persistently making deliberate attempts to safeguard the environment was evident in his creative ways of representing retaliation, such as showing love for trees and saving them through literally ‘hugging' or ‘clinging on. It was a completely new strategy that some women of the area used initially until the loggers and, its officials were encouraged to change their minds and go back home. As the protest gained attractions, supporters grew also.  And protect the entire ecosystem of the area, resulting in the "Save Himalaya" campaign.

Between 1981and 1983, Bahuguna marched 5,000 kilometers (3,100miles) across the Himalayas, bringing the movement to national prominence.

He did not just stop here. Determined to increase environmental security, he also extended his support on the prevention, of the construction of the Tehri Dam that began in 1972. He protested for several years until 2004 when he and his wife Vimla were forcefully relocated to a government-issued home upstream. Harmful implications of the construction projects were highlighted by him. And his fellow mates to persuade the government to put a halt on the project from commencing further. The Tehri Dams are built to divert water away from mountain villages and increase water flow to the national capital- New Delhi. This scheme has led to a jeopardization of the Himalayan village’s water supply and has wreaked havoc on many lives.

He left no stone unturned to demonstrate his unwavering commitment to putting a full stop to the Tehri Dam project. He filed numerous petitions to the government and went on hunger strikes with other activists like Medha Patkar. Sunderlal Bahugana, in an interview, later had stated that the Tehri Dam Project isn't meant to be the end of his battle for safeguarding the environment. Hundreds of people joined the fight to save India's forests and natural resources due to his inspiring leadership.

His leadership traits gained him national and international recognition from organizations such as the United Nations Environment Programme, the International Labour Organization, the United Nations University, and the Food and Agriculture Organization. Having become one of the most influential environmentalists, he was joined later by several other environmentalists and celebrities from across the globe, including the late Richard St. Barbe Baker.

He made a crucial global contribution by raising consciousness about deforestation, the adverse effects of alcoholic drinks on mountain life, and the Ganges River's health. India and people across the globe applaud him for his outspoken views that energized India's youth to join the protests against the country's environmental destruction.

Sunderlal Bahugana’s entire career is a living example of philanthropy and, the power that it carries within itself ultimately prompts a person to bring a change. And most importantly, be the change. After selflessly devoting his time in social service to make society a better place to live in, Sunderlal Bahugana, as a person, is a heart on two legs and will continue to live in the hearts of everyone. He is a catalyst for change who encourages and motivates thousands of people to take one step further towards creating an environmentally conscious India.

Are women ‘Independent’ in Pakistan?