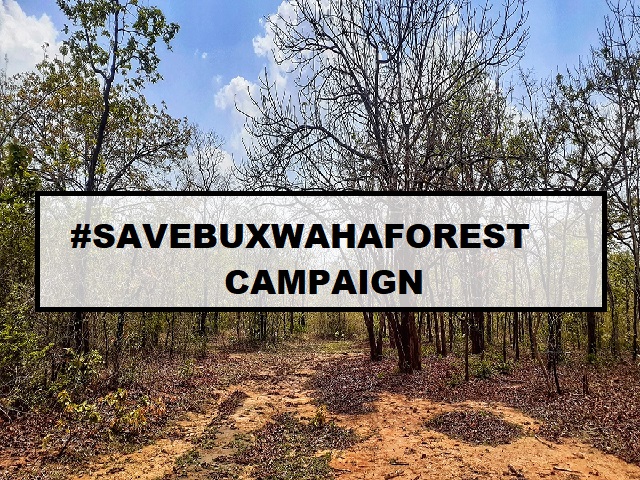 In recent months, #SaveBuxwahaForest is trending on every social media platform. Especially children's videos had become viral where they tried to tell the government about the significance of trees to everyone. They had penned poems and urged with their hands folded to stop cutting trees through these videos. Even on June 5, World Environment Day, locals of that area had arranged a "Chipko Movement" to raise the concerning issue. The whole protest is about the proposed project in the Buxwaha forests. In 2019, an Area of around 364 hectares in the forest had won by Aditya Birla Group's Essel Mining & Industries Limited (EMIL) in a bid for a diamond mining project. There was speculation that around 34 million carats of rough diamonds were in the area. The Forest clearance reports stated that for the functionality of the project, over 2,00,000 trees will be cut down and will require lots of water for usage. This report has triggered nationwide environmentalists, ecologists, and locals to protest against the proposal. Public Interest Litigation (PIL) moved against the company to put a stay in the project, which was already filed by activist Neha Singh in Supreme Court, and activist Dr. PG Najpande went to National Green Tribunal (NGT) for pleading to stop the project.

In India, there are four diamond reserve states- Andhra Pradesh, Madhya Pradesh, Chhattisgarh, and Odisha, according to the Indian Bureau of Mines (IBM). Among them, Madhya Pradesh stands to have a 90.18% for having diamonds. Therefore, for putting up the mines and extracting the diamonds, National Mineral Development Corporation (NMDC) is stimulating these areas. EMIL has announced an investment of around Rs. 2500 crore to develop a fully mechanized opencast mine and state-of-the-art processing plant for extraction of Diamonds. In 2019, EMIL had won the bidding and obtained 50 years of the lease for the project. They had the plan to start the execution of the mining at the end of the year 2022 after getting various regulatory clearances. Reports claimed that from this project, the MP government could gain Rs. 1,550 crore annually. But the backlashes faced by the project are causing a hindrance to these dreams built by the government.

It is not the first time the bunder diamond mines faced strong resistance. Madhya Pradesh government in 2006 had granted a prospecting license to an Australian mining giant, Rio Tinto Exploration Indian Private Limited (RTEIPL). The project is said to spread across 954 hectares in Buxwaha for mining. But after 14 years and spending over USD 90 million, the company has exited from the project without any logical reason. A press statement of Rio Tinto stated that they had gifted the Bunder diamond project to the government of Madhya Pradesh, India, and also handed over all the infrastructure, including land, plant, equipment, and vehicles.

What are the main concerns?

According to the Quint report, Anurag Kumar, District Forest Officer (DFO), had stated that the project provides many viable job opportunities to the locals. The company will work in the given area. Thus, the rest of the forest will remain untouched. He also claimed that the company, going to compensate for the damage by afforesting in another place.

To refute the claims of afforestation, Activist Amit Bhatnagar said that these claims are only on paper. Since there is no report of its actual feasibility. He has given examples of compensating trees in the Bundelkhand expressway highway are barely alive. Also added that the number of cutting down trees is higher than approximately 2,00,000. Therefore, the loss of flora and fauna is unaccountable and unacceptable. He expressed this by stating the incident of the Ken-Betwa interlinking project where the number is higher than the official number of 21 lakh trees.

Due to the ongoing pandemic, it is hard to provide awareness among locals on the ground, but the environmentalists are doing everything to educate the people about the looming destruction. Activist Sharad Singh Kumre, an active member of 'Paryawan Bachao Abhiyan' and a defender of Buxwaha forest, said that most of the time, forest destruction by industries goes unnoticed. They are very fortunate that this time the protest gets the national limelight. Youth of the country is actively participating through many online social campaigns. Therefore, the demonstration is attaining its massive momentum.