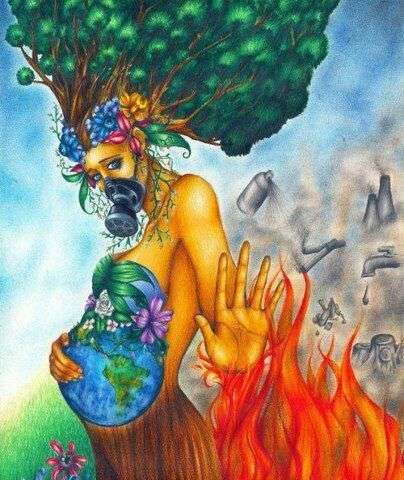 The world is on the brink of facing the wrath of global warming to 1.5-degrees Fahrenheit. The temperature has been increasing exponentially, leaving homes, communities and countries devastated. What we need to do is to tackle the situation now. We cannot wait for a miracle to happen; the economies must move towards decarbonization. At a grassroots level, we need infrastructure for transportation, houses, and to provide land for farmers, but is the land being used properly, or for deforestation? The burning of coal, which has high emissions of carbon, is the highest use resource in India; it also leads to maximum pollution. Cars which cause more pollution because the vehicles are old are a grave threat. Still, India's target for the transition to electric vehicles can put her at the forefront of electric vehicles globally. An alternative option is public transport like the metro, car-pooling, etc.

There are social factors where old stereotypes like using methods which aggravate pollution. Farmers in Punjab still burn their fields after paddy for good post-harvesting. But they do not know the repercussions it has by emitting carbon and increasing PM2.5 levels. They have no other option, though; equipment is expensive and beyond their control. The focus on stubble burning is a significant issue, and the government must provide subsidies and facilities to farmers. Industries release sulfur emissions, which need to be banned, and a need to change mindset is essential where people understand the value of the environment and global warming. Not using plastic and keeping the area clean is a good start.

Delayed action sends the price for sea defenses, food security, infrastructure adaptation even higher. All the countries must meet their climate targets under the Nationally Determined Contributions and achieve their climate pledges. There are different cases under the Paris Agreement on climate change. These pledges are known as National Determined Contributions or NDC. These scenarios are;

Currently, India, the US, China, and EU28 are the largest carbon emitters. If the world wishes to prevent global warming from crossing 2-degree Celsius by 2100, then emissions must be controlled and limit the warming by the end of the century. The role of the government is to keep natural bodies clean, which includes; rivers, mountains, etc. Astringent punishment for littering and waste management is required at a grassroots level. Smog can be tackled, by banning dangerous chemicals released from factories.

According to the United Nations Development Program report, 125 million people would die because of global warming and pollution by 2030. The threat it holds is not only on humans but livelihoods, economies, etc. More than 70% of coral reefs would be threatened, and if the temperature reaches more than 2-degree Fahrenheit, then all the reefs would die. The Arctic Ocean, which is melting at a faster pace, can submerge many countries and, can bring havoc like floods. It should be noted, that due to the increase in pollution, the intensity of drought, extreme weather conditions are increasing daily.

Role of the Government?

No, today, the nations are not doing enough. With an increased number of countries and regions adopting ambitious goals in line with the transformation needed, much more needs to be done. When the world is turning, towards jute bags and recycling plastic, there is still heavy use of plastics thrown in oceans and rivers, killing aquatic species. Flora and fauna are destroyed, and trees cut down for roads, buildings will only lead to more destruction. Insects, essential for the pollination of crops, will lose their natural habitat if the temperature crosses 1.5-degree celsius.

The world depends heavily on natural resources, which are depleting day by day and putting the future generation at risk. The wildfires, burning of peatlands are all because of global warming. The solution to curbing global warming is to stop using single plastics, not burn waste (burning wood), use public transport, and use eco-friendly technology like CFL.

India has been battling pollution and is among the countries which are prone to natural disasters. About 2 million deaths take place because of global warming. The current policies are in place but assumed that actions are not taken, by nations. The world is on the brink of missing the 1.5-degree Celsius target, which is a blemish on humanity, to a future we need. Climate change is impacting everything, and countries cannot wait any longer. The Paris Climate Agreement is the start, and cities, governments, and individuals need to play their part for the nations and their better future. A future we need for ourselves and for the future generations to come.