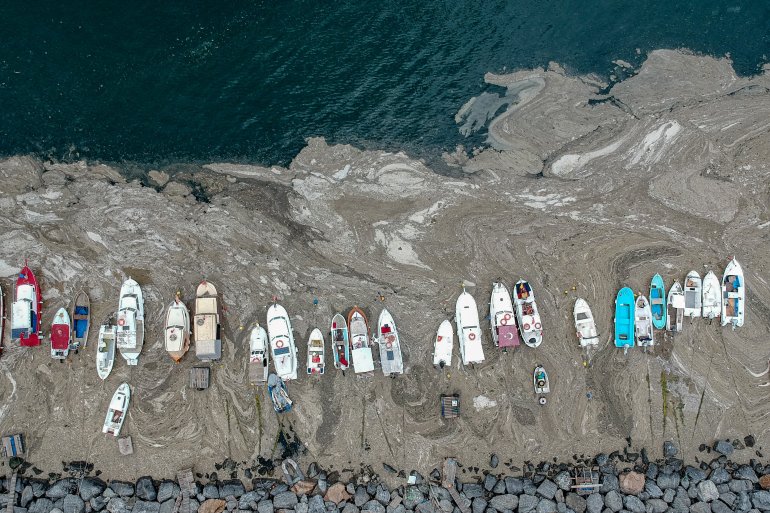 Turkey is going through the worst phase in its history of man- made environmental calamity. Sea Snot, a crisis spreading in the Sea of Marmara, is a condition where a greyish slimy sludge-like substance covers the surface of the water and tends to suffocate the marine life beneath it. From an aerial view, it looks like a carpet of cement. It is not only a ‘Climate Change’ alarm for Turkey but also for the rest of the world.

Turkey is a transcontinental country. It lies in both Asia and Europe. The strait that connects its Asian side with its European side is the Bosphorus strait and the south of it lies the Sea of Marmara. This sea joins Black Sea with the Aegean Sea. From a zoomed out view, the sea lies in the north west area of Turkey where the Sea Snot is expanding.

Reason Behind the Sea Snot:

According to the scientists, a sea snot is a combined result of global warming and water pollution. An algae is always a good indicator of water pollution because it thrives on water, sunlight, nutrients like nitrogen and phosphorus and carbon. When the nutrients are loaded in the water and when the temperature is hot, the algae feeds on them. Thus, a serious, neglected amalgamation of such environmentally harmful activities can potentially lead to something as disastrous as this!

Turkey’s President Recep Tayyip has blamed Istanbul industries for the current crisis who were constantly releasing untreated water full of nutrients into the Sea of Marmara, trapping Turkey in the crisis it is in now! Even untreated sewage and agricultural runoffs play a role in polluting water bodies.

Sea Snot is like a thick layer which covers the surface of a waterbody. It tends to cut oxygen for all the living organisms below it. It is like an iceberg, there’s massive danger below the surface. This is the reason it needs to be stopped as early as possible or it would be a super spreader, spreading to the roots and eventually ending up to be a very big ecological failure. A lot of creatures consumed by the people like crabs, fishes etc can get poisoned and end up creating health issues.

Even if a person is not eating seafood, he can get affected by the outbreak of waterborne diseases like cholera. It is a complete trap game. If something is not good for the environment, it is not going to be good for humans.

Sea Snot can also cause supreme loss to fishermen and other people whose livelihood depends on the sea. The fishermen can get their nets all clogged as a result of which they could break too. With all the sludge in the net, it becomes heavy and a less efficient catch technique for fishes.

It is all an overwhelming crisis to handle if deepened further and not eradicated at the right time.

This is not the first time the outbreak has happened. It was first recorded in 2007 in Greece. But it was not as severe as what Turkey is going through!

Surface- As short term mitigation measures, Turkey is using the vacuuming method to remove all the marine mucilage. It is first confined in an area and then pumped out. Hundreds of workers have been deployed at the coasts meeting each of the provinces.

Underwater- Since sea snot damages life below it, dredging machines will probably be used by the authorities.

For long term mitigation measures, the Sea of Marmara will be declared a ‘Conservation Area’ at least till the end 2021.

Murat Kurum, the Environment minister of Turkey has imposed a total of TL 14.8 million ($1.6 million or more than 12 crores) fine to the facilities who contributed to the current situation, violated the environmental laws and put the public health in danger.

Turkey is holding the largest sea cleanup currently in an attempt to prevent slimy substances from entering the Black Sea.

After almost a month of dedicated work, a research by scientists has declared a positive news that the marine mucilage is stuck at 30 metres or 98 feet and its growth has partially stopped.

The campaign to clean the sea which began in the first week of June has successfully cleared 8,405 cubic meters of sea snot so far. And, the gathered mucilage is being treated at the waste disposal centres.

The effect of climate change and the greed of industries has just begun! If the world, its leaders, businessmen, industrialists and anyone and everyone decides to doze off and do absolutely nothing about the environment, there’ll be a time when even a ‘cure’ will be impossible. We cannot wait for climate change to become irreversible! Prevention is better than cure.

Warning to Australia on The Great Barrier Reef