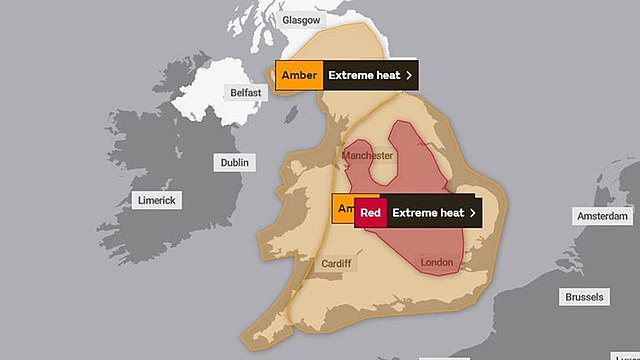 The UK faced a ‘national emergency’ on Monday and Tuesday as forecasters warned temperatures could hit 42C, the first time ever the country has seen temperatures above 40C.

On Monday night, Britain recorded its warmest night on record, with temperatures not dropping below 25C in some parts of the country.

Other European countries have been facing apocalyptic scenes.

More than 30 wildfires were being battled by firefighters in Spain, with two deaths and 32 villages evacuated in the north-western Zamora province.

Around 70,000 hectares of land have been burned by wildfires in Spain so far this year, which is approximately twice the average of the last decade.

Twice the average area of land in Spain has been burned this year so far, compared to the decade-long average.

In Portugal too, the IPMA weather institute warned of ‘maximum risk’ of wildfires in as many as 50 municipalities across the central and northern parts of the country, with more than 1000 firefighters already battling five main fires in the north. As a result, hundreds have been evacuated, and on Monday, an elderly couple was found dead inside a burned-out car.

It is a similar story in France and Greece, with thousands of firefighters fighting wildfires of unprecedented intensity and number, which is rarely seen across Europe to this extent.

In the UK, transport disruption has been rife, with two mainlines connecting the north of the country to London closed on Tuesday due to the rails buckling in the heat: British railways are designed to withstand a maximum temperature of 27C – the average summer day in the south of the country. However, with air temperatures in the thirties, track temperatures can be up to 20C higher, leading them to buckle and be a danger to high-speed trains. Network rail, which oversees the railways, set blanket speed restrictions for Monday and Tuesday across England.

Luton airport, a major London airport, saw flights cancelled and diverted on Monday due to the runway ‘melting’ in the extreme temperatures. Flights from the Royal Air Force (RAF) base at Brize Norton in Oxfordshire were disrupted on Monday, although the RAF said that operations were not affected.

The effects of the heat continued on Tuesday, with the London Fire Brigade declaring a major incident due to the number of fires in the city, including a blaze to the east of London which over 100 firefighters and 15 fire engines tackled, contributing to the brigade’s busiest day since the Second World War.

Professor Nigel Arnell, a Professor of Climate Change Science at the University of Reading, told the BBC, "Wildfire is a rather unrecognised hazard in the UK. Whilst we might not see sorts of the forest fires currently sweeping through Spain, Portugal and France, we are increasingly prone to fires in grassland and moorland."

"So far we’ve been lucky, but that may not hold for long. Climate change is increasing fire danger across the UK, and we need to be prepared for it,”

With the Conservative leadership contest still in full swing, campaigners are urging the government to focus more on tackling the effects of climate breakdown.

In 2019, the UK parliament put into law the target to reach net-zero carbon emissions by 2050. Recently, this target came into doubt as the Tory leadership candidates, such as Kemi Badenoch, appeared non-committal to keeping the target in place. The UK’s climate chief, Alok Sharma, threatened to quit if the new Prime Minister removed the target.

Professor Peter Scott, from the UK’s meteorological office (the Met Office), conducted research in 2020 investigating the likelihood of the UK hitting 40C due to global climate breakdown.

Speaking to The Guardian, Scott said, “I find it shocking that we’ve reached these temperatures today in 2022, smashing the previous record set only in 2019.”

“But we calculated it as a relatively low likelihood – a roughly one in a hundred chance – albeit that those chances are increasing rapidly all the time with continued warming,” Scott continued. “Breaking 40C today is very worrying; we’ve never seen anything like this in the UK and it could be that the risk of such extreme heat is even greater than our previous calculation showed.”

The pattern is not hard to see. This year alone, the world has faced numerous unprecedented events including heatwaves in India and Pakistan, with temperatures reaching 50C and killing 90 people,  Japan’s worst heatwave on record, and severe storms in Europe such as storm Eunice which killed 17 people across the continent.

On Monday, the UN Secretary General told representatives of 40 countries at a meeting in Berlin, “Half of humanity is in the danger zone, from floods, droughts, extreme storms and wildfires. No nation is immune. Yet we continue to feed our fossil fuel addiction.”

“We have a choice. Collective action or collective suicide. It is in our hands.”

Meanwhile, the UK’s Prime Minister has been accused of being missing when he is needed most by the opposition Labour Party, with the Shadow Communities Secretary, Lisa Nandy, saying it was obvious he’d ‘clocked off’ after his recent resignation.

Johnson had already missed two emergency cobra meetings by Monday morning, with Sky News reporting that he held a garden party at the Prime Minister’s official country residence – the Chequers estate, which boasts several acres of garden and an indoor swimming pool.

The leader of the Labour Party, Sir Keir Starmer, told BBC News that the Prime Minister has ‘checked out’ and that his cabinet is ‘completely distracted with the circus of a leadership race.’