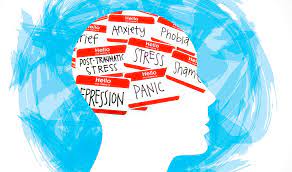 The mental health issue is one of the most rapidly growing problems of society. As there is a rise in science and technology, people are starting to be more accepting, open-minded, and tolerant that are working towards a solid foundation of the future. However, there is a rise in people suffering from detrimental mental health.

What is mental illness?

Nearly everyone feels worried or anxious in their mundane life but few develop a mental illness. So the vital question is what differs normal anxiety from mental illness? A mental illness is a mental condition that gets in the way of thinking of the individual that could be related to anything the person finds offsetting.

India has recorded more and more cases regarding mental health issues lately. A study by the India state-level Disease Burden Initiative recorded that the disease burden in India due to mental illness has increased from 2.5% in 1990 to 4.7% in 2017 in terms of DALYs (disability-adjusted life years) and was the greatest contributor to YLDs (years lived with disability) and it led to 14.5% of all YLDs in the country.

Where India is rising in numbers of citizens with mental health issues on the other hand the country still has a long way to go to become tolerant and accepting towards this issue. Society here doesn’t consider any health issue as deleterious until it is physical and if someone is upfront about their anxiety people shame them for being so sensitive and weak or worse, they accuse one is trying to gain attention which leads to people becoming more and more discrete.

Worry, tension and stress are normal reactions to perceived or real threats and often when people are faced with uncertainty. So it is common and understandable that people are suffering from fear in the COVID-19 pandemic.

In addition to the fear of the virus in the pandemic, the changes in our daily routine have resulted in the major inconvenience to handle our social and personal life. People are confined to their homes 24*7 and cannot meet their friends and family in person that has affected their social life tremendously. People hear about 1000s of deaths per day due to pandemics which causes hysteria on a deeper and personal level especially for people who are living alone on their own and have to go through the personal loss alone.

In this context, WHO has taken an exemplary initiative by providing guidance and advice during the pandemic for health workers, managers of health facilities, people looking after children, adults and older adults, people in isolation, and members of the public to help them look after their mental health.

What could be done?

Well, the most affected group of society by mental issues is the youth. They are so intimidated by the idea of failure that they rather choose to be affected themselves or end their lives than face what comes next. One of the major reasons behind this is their education or say the education system of the country.

Well discussing the education system and its pros and cons is the whole other discussion, what good can come out of it is that the school can play a game-changer. The school acts as a framework of the mindset of the citizen as nearly everyone is connected to it in one or the other way, so if the school starts normalizing and educating on mental health it can act in a humongous way to change the way people look at this problem. Every school must provide a therapist or counselor who can talk to students regarding their issues to avoid the situation that further leads them towards depression, anxiety, or self-harm.

Battling Depression : the truth is out (2)