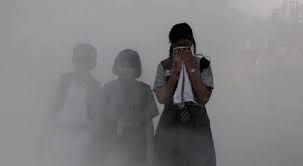 New Delhi, India, has been reeling from a prolonged haze since November as the capital grapples with its "most severe" three-day smog in 17 years.

The government has ordered schools closed amid calls from parents and teachers for children to be allowed outside to play. A ground-level view of the city reveals an area almost devoid of light and color because the air quality is so poor it's been classified as "hazardous."

Drivers are struggling with poor visibility on both major highways leading into the city, which are deemed dangerous despite tightened security measures. Cars speed around a police checkpoint on one road but then narrowly avoid crashing into barriers nearby.

The fear of being arrested for even minor traffic violations is driving some to risk their lives; others are wearing gauze masks, and still, more are staying inside. But it's not just the roads that are hazardous; the haze hangs in the air like a poisonous gas. Elsewhere in the city, it's worse. Outside a primary school near one of India's most polluted rivers, children quietly queue to collect their lunch boxes. Some offer excuses for not being able to play outside; many have no choice at all.

How it affects outside the schools?

Outside the school in RK Puram, which is located on a slum of small streets that run between polluted and unpolluted areas, there is no traffic whatsoever, contaminated or otherwise. The only things visible are the flies and dust kicked up by people walking through the narrow alleyways.

The situation is more complicated than just a "bad air" problem. In India, air pollution is not just an issue of poor government hygiene standards but also a consequence of the increasing number of vehicles on city roads as millions have moved to urban centers seeking better opportunities.

While Delhi's air quality remains significantly worse than Beijing's, it is not the worst in India. Other cities like Raipur, Patna, and Gwalior suffer much more. 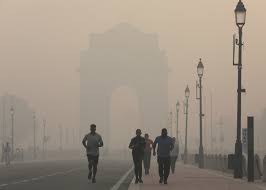 How the situation affects poor people living in slums?

The city's real estate boom has seen a third of Delhi's population -- about 10 million people -- now living in slums built illegally along the polluted Yamuna River, which flows from the Himalayan foothills to the Ganges. The government has clear plans to build an underground sewer system to help its poorest residents, whose houses are built on top of them, but they need money to do so, and that money is not forthcoming. 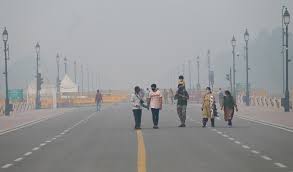