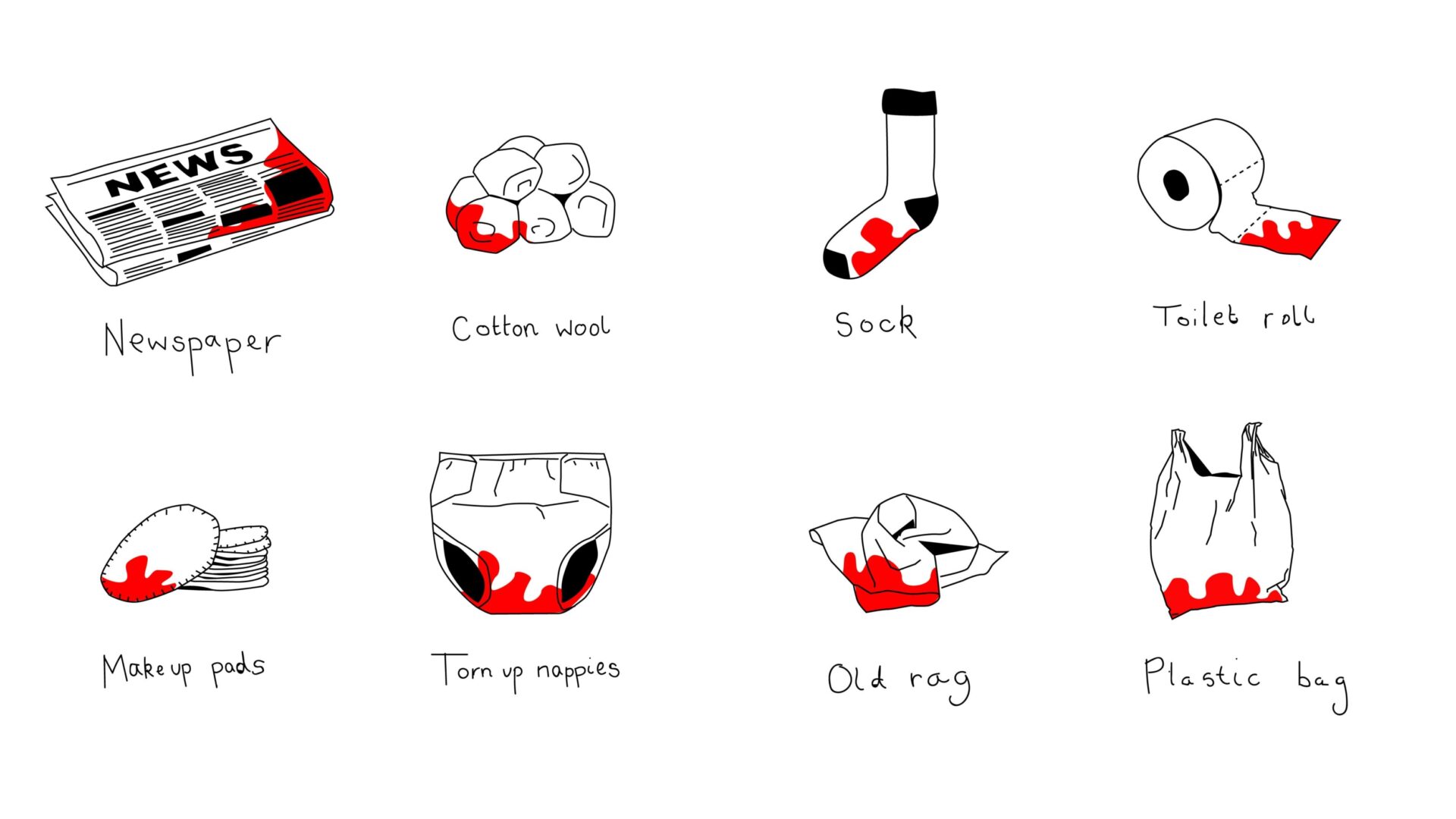 It is not a secret that sanitary products have not been accessible to women and girls throughout many parts of the world. According to Mbali Phala, who published an article for the Daily Vox, tampons are R1, 50 each, and ten pads cost R18 which is too costly for some women and girls, prohibiting them from performing the daily functions like going to school and work.

For generations, menstruation was not regarded as a natural process that prepares the female body for reproduction. Menstruation is related to shame, and it is unfortunately attached to stigmas, myths, superstitions, and discrimination. This is due to most groups in society not being educated about the biology of menstruation, resulting in women, particularly younger girls- not only being ashamed of having a period but also being unaware of their options regarding the necessary hygienic care.

Although the stigma has reduced in some communities over time, the lack of menstrual education is still an issue in several places around the world. Although South Africa has taken the initiative to integrate sexual education into school curricula, it still fails to discuss all aspects of menstruation in depth. The Comprehensive Sexual Education Guide released in 2019 for Scripted Lesson Plans for Grade 7 does not address menstruation as an independent topic. The importance of menstrual hygiene is not highlighted in the plan and only devotes one hour to the topic, which is an insufficient time to cover the numerous layers of menstruation.

As previously noted, this is a global issue, with 125 000 Australian women who participated in the Big Bloody Survey stating that they had to improvise when purchasing sanitary products. The Australian Capital Territory (ACT) is a jurisdiction that was working on addressing this issue in 2021 by making sanitary products free of charge in parts of Australia but has yet to implement it in 2022.

Period. End of Sentence is a documentary that follows a group of local women in Hapur, India, as they learn how to make low-cost, biodegradable sanitary pads. This initiative helps to improve feminine hygiene by providing access to essential products and empowers women to shed the taboos in India surrounding menstruation.

Plan-UK also conducted a survey and concluded that over one million girls in the UK struggled to afford or lack access to pads. Rose Caldwell, CEO of Plan International, states, "We have seen great progress in public awareness of period poverty over the past several years thanks to the tireless work of grassroots organisations, but this is a wake-up call that much more needs to be done to ensure that all girls can access period products when they need them.” This honest statement illustrates that this is a worldwide issue with a tremendous amount of awareness, but people in positions of power are not taking action to address this issue.

If sanitary product inaccessibility is a significant issue as it has been for an amount of time, the considerable controversial debate is why aren’t pads free like condoms? Free condoms were introduced to governments globally in response to the HIV/AIDS pandemic. The trend of free condom distribution was popular in the 90s, which was specifically developed in 1992 in South Africa. In 2004 Choice condoms were launched and, according to Polity, rebranded to scented condoms and more appealing packaging in 2015. The brand was renamed, Max, and according to The Conversation it set back South African taxpayers R3.5 billion.

The argument is that while it is feasible to abstain from sexual intercourse, menstruation is a natural occurrence that cannot be avoided, as females as young as nine years old can begin menstruation. Former South African President Jacob Zuma vowed to distribute free sanitary products in 2014 but failed to deliver that promise during his presidency. It is legitimate to suggest that many world leaders who are majority males find it difficult to understand the crucial need for free sanitary products. Leaders who are male are prone to prioritising matters they are familiar with, such as sex and poverty. However, it is difficult to prioritise a problem like menstruation and its accompanying hardships as they do not menstruate every month and, hence, perceive it as an ‘unachievable expense’.

In 2019, Dis-Chem started the Million Comforts campaign. It collaborated with its customers and major pad companies to distribute pads to schoolgirls who do not have access to pads to enable them to stay in school. This was a good initiative, but it is a failure in terms of sustainability because the campaign runs for a limited amount of time a year.

Reusable pads come into play since several organizations provide free, reusable pads to girls. It is a sustainable approach because sanitary cloth products can be used for up to a year. Products Palesa is a non-profit organization that offers reusable cloth pads to schoolgirls by collaborating with corporate sponsors and NGOs to distribute the items for free. Product Palesa, launched in 2017, also accepts donations from individuals. SubzPads is another organization that performs similar operations, and there are many more organizations in specific communities throughout the world that do the same.

According to the BBC, Scotland is the first country to make items such as tampons and sanitary pads available to all women and girls who need them. Labour MSP Monica Lennon introduced the bill in November 2020. Lennon has been campaigning to end ‘period poverty’ since 2016, and the bill was pushed forward because of the Covid-19 pandemic.

Considering all these matters, free sanitary services are long overdue. As much as organisations provide reusable sanitary products, they cannot reach all women and girls that lack access, as they are selective only reaching out to schoolgirls. What about women that are struggling to afford these products?

Allow Scotland to serve as a model for all nations around the world in expectations that they see the immense ease it can bring to women and girls that do not have access. Free sanitary goods can bring about a positive revolution in the same way as free condoms normalised condom usage, provided widespread HIV/AIDS education, and prevented many individuals from contracting HIV.